0
21
This post may contain compensated links. Please refer to my disclaimer here for more information.

It could have been just any other ordinary Tuesday on the road. Instead it morphed into a day of luxury in one of the best cities in the world.

Australia is one of the priciest places on the planet at the moment. The high Australian dollar is making it tricky to stick to a budget for even the savviest of travellers. But… we’d had a rough few weeks in Christchurch in the lead up to our travel. It was a lot of work to sell off our stuff and pack up our house. So, we decided to allow ourselves 24 hours of luxury in Sydney as a reward for our hard work. We like to watch our budget when we travel but we also know it’s important to treat ourselves. We deserved a little luxury!

A panoramic view of our room at The Four Seasons Sydney

Living in Luxury at The Four Seasons Sydney

We arrived at the Four Seasons Sydney mid-morning. It was only a block from the Sydney Harbour YHA where we’d stayed at the night before so we walked there… easier said than done with a suitcase, a backpack, a carseat, a sick child and a stroller with way too many bags on the handles. We found The Rocks a little difficult to navigate with a stroller, the incline was steep and the steps made things difficult. Happily we were now back on the flat of George Street so Sydney was accessible again. Check in went smoothly. We were early and our room wasn’t ready but the front desk attendent quickly found us another room which is always appreciated (even more so with a sick and now grumpy child.) 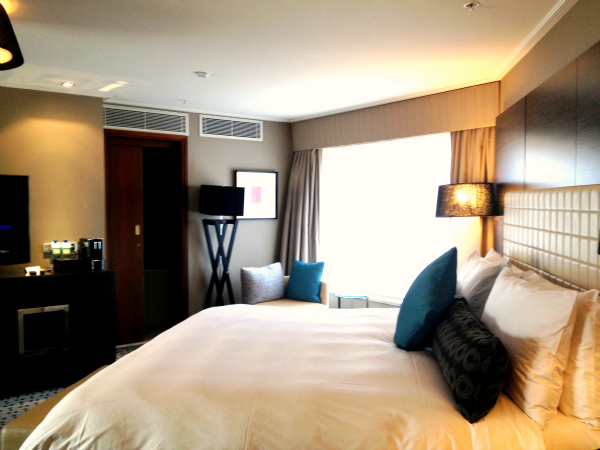 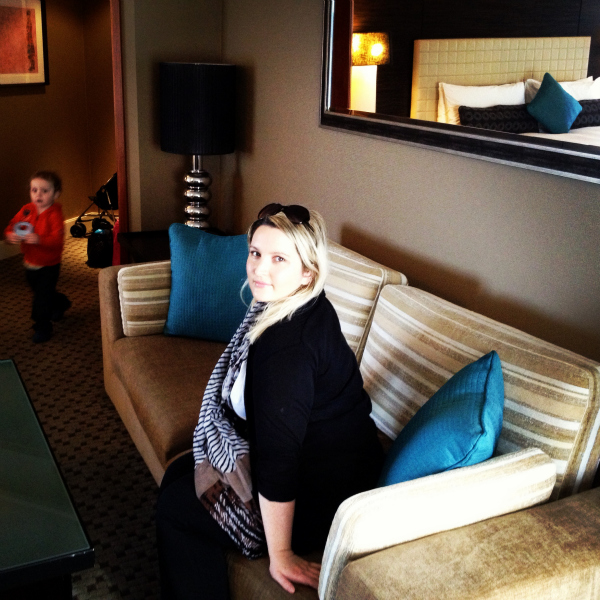 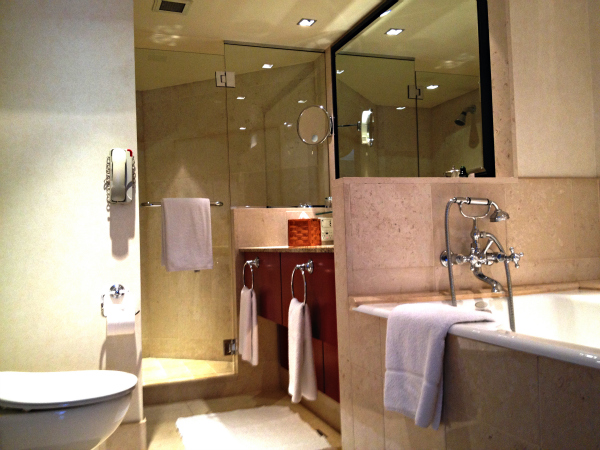 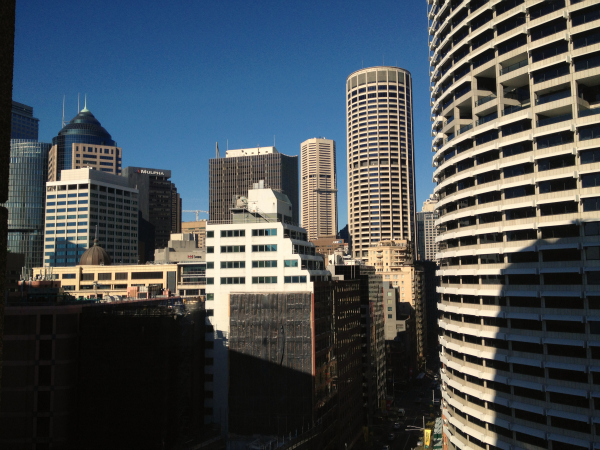 Sydney City from the 17th floor

We had a gorgeous room on the 17th floor overlooking the city. If heaven were a hotel room this would be it – huge comfy bed with soft squishy duvet and lots of pillows, a big screen TV, space to spread out. Having a sitting area, work area and walk-in robe made our room feel more like a studio apartment (sans kitchen) than a hotel room. The marble bathroom was decked out with a tub, steam shower and L’Occitane toiletries that smelled divine. (I’m still using the hand cream!) 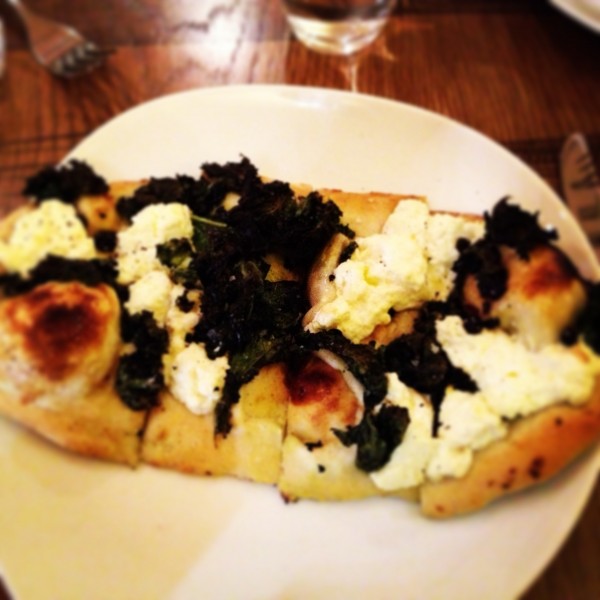 Wood-fired pizza from The Woods at Four Seasons Sydney

We’d had a rough sleep the previous night (have I mentioned the sick child yet?) so we decided to take a day off being tourists and just enjoy the hotel. We ate a really good lunch at The Woods restaurant downstairs – wood-fired pizza with kale, ricotta and rosemary for me and a fantastic burger and fries for Lee and Reuben. We retired back to our room for an afternoon nap, caught up on some work, ate cheese, drank wine and prepared for our big night out at Sydney’s best restaurant.

Dinner at Rockpool on George

We had an amazing opportunity to dine at one of the best restaurants in Australia thanks to my cousin Phil Wood being the chef at Rockpool on George in Sydney. We knew it would be good but we weren’t prepared with how amazing our meal would be. On arriving at the restaurant we were seated and asked if we were happy for the chef to simply feed us. No menus required. We were to eat what the chef thought best showcased the menu. I’d already checked out the menu online so had a fair idea what was on offer. Some of it was fairly strange but both Lee and I are trying to be more adventurous with our eating so we said yes. We ordered a way-too-expensive bottle of vintage French champagne and the meal began. 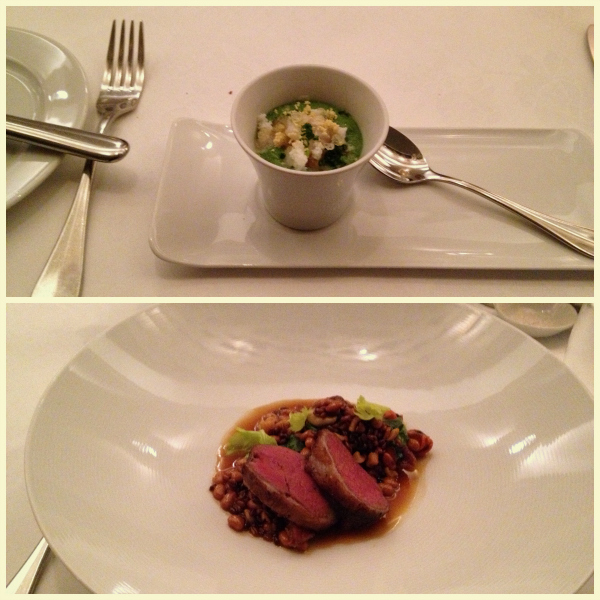 Course after course after course we were delighted at the plates we were served. Crab, parsley & fennel fondue, tuna sashimi in housemade soy sauce (that takes seven months to make from scratch), crab with stir-fried milk, cod in a sour orange curry, pigeon with scallops, lamb with soy beans & tea-smoked mussels, passionfruit soufflé, chocolate & peanut butter ganache… stop me if your mouth is watering! For some of the courses we were served the same meal but most we different which meant we got to taste almost everything on the menu and a few special surprises. We stopped counting after course number five but I think we ended up somewhere close to twelve courses including a double dessert course! 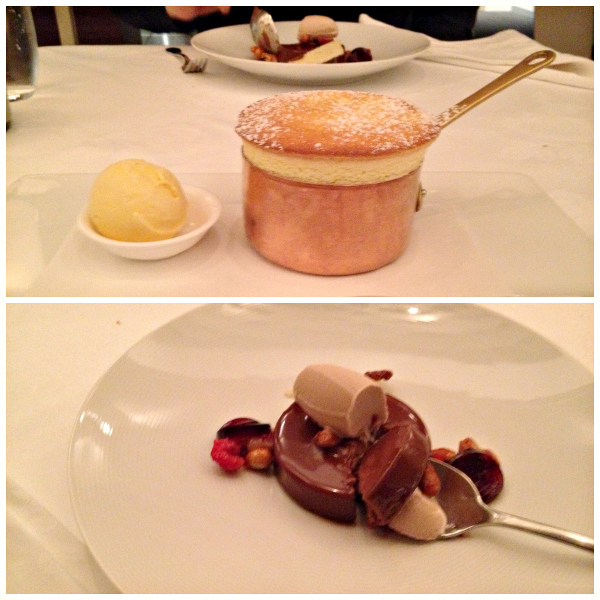 I’m a big believer that it’s best to not know what you’re eating and just enjoy the taste of it… whether it’s five-star dining or a pot of mystery soup on the streets on Yangon. Don’t ask, just enjoy! I’d never knowingly order duck prosciutto, crispy chicken skin or foie gras but simply being served it, eating it and enjoying it broadens the mind and the taste buds. Being slightly drunk on Champagne certainly helps! I still feel a bit bad about eating the foie gras but by the end of the meal I knew how that force-fed goose felt!

The differences between a great hotel and a luxury hotel are clear. It’s all about the little touches that scream quality and attention to details – a personalised welcome message on the TV when you walk into the room, a second round of toiletries at turndown, an in-room pod espresso machine. There was no boring hotel breakfast the next morning. Instead we were treated to eggs benedict, fresh fruits, housemade yoghurt and proper cappuccino. You can really see where the extra money goes in a hotel like the Four Seasons Sydney. 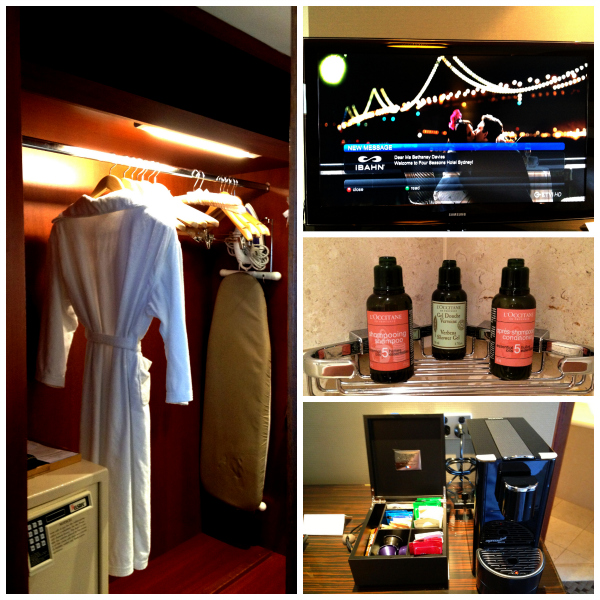 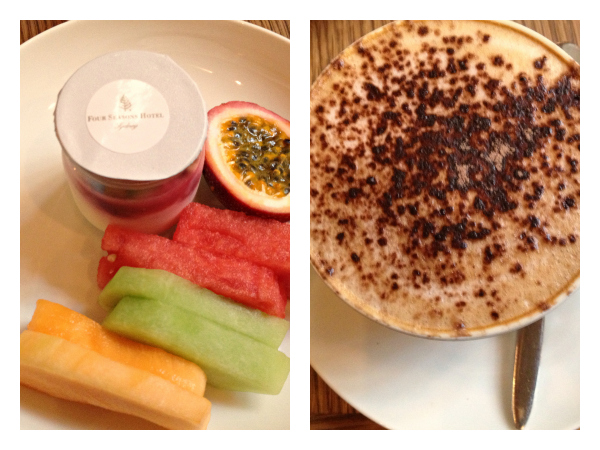 Breakfast at The Four Seasons Sydney is a special affair 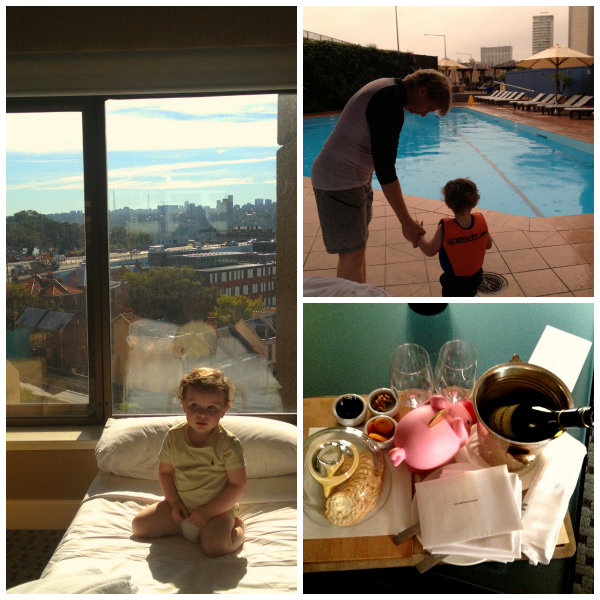 While this is a luxury hotel it’s perfectly child friendly. Reuben got to sleep in a perfectly made up stretcher bed, there were plenty of kid-friendly channels on the TV and staff even sent him up a piggy bank filled with chocolate coins. He enjoyed swimming in the heated outdoor pool the next morning despite the rain. Even children enjoy a hotel splurge every now and then.

The Four Seasons Sydney kindly provided us with a one-night stay.