0
32
This post may contain compensated links. Please refer to my disclaimer here for more information.

After arriving in Koh Samui on Friday and having a great first day at the beach and pool with Reuben, things started to go down hill. As you probably know from my Facebook updates, I spent the next seven nights in hospital. Here’s what happened and what it was like in hospital in Thailand. 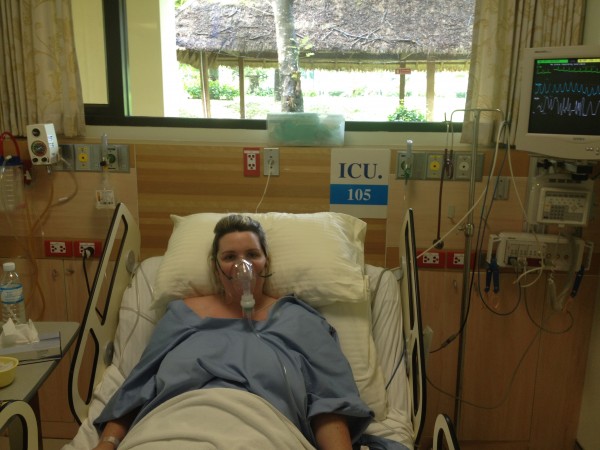 Sunday morning, a sore throat started. It didn’t feel so bad so I soldiered on. By evening I started feeling chesty. By Monday morning I was having a full blown asthma attack. I took some meds and waited for them to kick in but they didn’t and by Monday evening I decided I needed to go to the emergency room. Lee called the reception of the hotel we were staying in and asked if they had a car that could take us to the hospital. The hotel manager was obviously concerned and decided to accompany us. He checked that we had travel insurance and took us to the Bangkok Hospital Samui which is supposed to be the best private hospital on the island. I was admitted quickly and taken to the ER. The ER staff were good, not amazing, but seemed to be doing all the right things – oxygen mask, nebuliser, IV line. After an hour or so they took me up to the ICU. Lee and Reuben left me to it… it was getting late, they hadn’t eaten and the doctor said I’d been in for the night so I didn’t see the point in them being there. I didn’t really want them there anyway as it must have been scary for Reuben.

Once I hit the ICU I started to go down hill, I could only breathe when I was on the nebuliser. My blood oxygen levels were dropping dangerously low. My chest was closing in. Not being able to breathe is the worst feeling in the world. The more scared and stressed you get, the harder it is to breathe. It’s a vicious cycle. The worst was yet to come however. Later that night I got my lungs suctioned. There was so much mucus in my chest and I couldn’t cough it out. Probably one of the worst things that has ever happened to me! It took four nurses to do it. One to suction and three to hold me down!

The doctor was concerned it could be pneumonia so I had a chest x-ray. Luckily, it came back clear so for the rest of my hospital stay I was treated for acute bronchitis. Having asthma on top of that really complicated things as my lungs go into protection-mode when they sense infection so shut down to protect themselves. Not the smartest thing when you can’t breathe anyway!

After two nights in the ICU, I was improving so was moved to the ward. It took a whole week of antibiotics, nebuliser and steroids to get my lungs back to functioning on their own without additional oxygen. 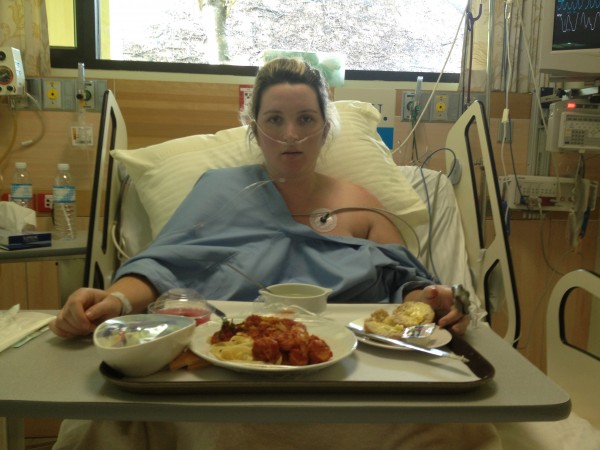 The Bangkok Hospital Samui is a private hospital. The doctors spoke excellent English and seemed to know what they were doing. The ICU nurses were fantastic – obviously really well trained, spoke great English and were very caring. (One of them braided my hair each morning!) The ward nurses were a step down. Some of them spoke English, some didn’t. Some seemed competent, some didn’t. I found being in hospital completely exhausting. The ward nurses didn’t seem to understand the concept of rest and I was only getting a couple of hours sleep each night. They didn’t seem to sync the medication times with observation times so I was given a round of meds at midnight, obs at 2am, meds again at 6am. It was infuriating and by my last day I was screaming at them to get out of my room and leave me to sleep!

I had a private room in the ward which was huge. It had a TV with cable, kitchenette, bathroom and fold out couch. I think it’s common for Thais to come in and sit with their family the whole day and night if they’re in hospital. The nurses thought it was strange that Lee and Reuben would only come in for short visits of an hour or so, once or twice a day. They assumed that they’d be staying overnight.

I had a choice of western or Thai food at each meal. The food was a bit hit or miss. Sometimes it was good enough to eat. Sometimes it was avoid at all costs! I could have done without being feed streaky bacon and sugary orange drink every morning for breakfast. Breakfast was at 8am, lunch at 11.30am and dinner at 4.30pm. I found it really hard to eat all my meals in the space of nine hours and was often starving at night!

On the whole, the hospital wasn’t bad. It wasn’t great… but then a hospital stay never is. I’m glad I ended up at the private hospital. I’d hate to see the standard of care at the local hospital if what I got was first-rate care.

What does it cost to spend a week in hospital in Koh Samui?

227,000 Thai Baht!!!!!! That’s about $9000 NZD or about $7000 USD and included everything down to the meals, toiletries and take-home meds. My travel insurance picked up the bill. I have my travel insurance through Travel Insurance Direct. They provide travel insurance for Kiwis and Aussies and it’s definitely the best option on the market for longer term travellers as you don’t need to have a return ticket, you can extend the policy beyond 12 months and can start it on the road (unlike many other insurers).

If you’re interested to see how Travel Insurance Direct compares to World Nomads, I did a comparison post when deciding on an insurer last year.