Another relaxing day in Kanchanaburi. After last night’s storm the morning was lovely and clear. Plenty of blue sky and sunshine.

The hotel includes a light breakfast – tea, coffee, toast and an extremely delicious homemade marmalade. It’s not something I usually enjoy the taste of but I’ve never tasted marmalade that good.

After breakfast when went for a dip in the pool then spent the rest of the morning playing outside and chatting to our new Swiss friends. Oh, and getting stung by a bee. I got an painful sting on the arm by a miniture bee. I didn’t know what it was at first as it was small, about the size of a regular house fly. It sure did sting though. Took me a few goes to get the stinger out. Some tiger balm seemed to stop the pain but I’ve got a big welt on my arm now.

After a tasty lunch at Tai Thai across the street (good food but small portions), Reuben had a nap and I snuck of for an hour of Thai massage. The massage is good value here – only 150B an hour (instead of 200B in Bangkok).

There don’t seem to be a lot of tourists around town. We’re staying on the main drag with lots of guesthouses, travel agencies and restaurants. I thought it would be busy, as Bangkok was crawling with backpackers, but it’s relatively quiet. Mostly, it seems to be older, white men that looks like they live here with their Thai wives. We’ve even seen some really old men (60+) with young babies. 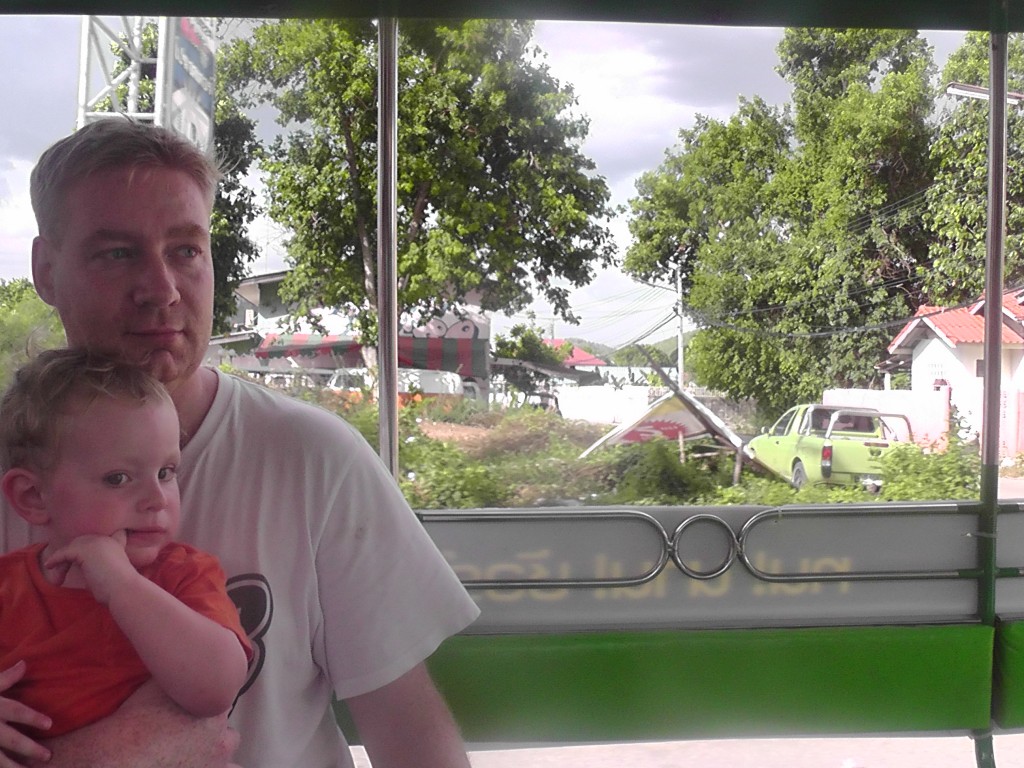 Songthaew - Another Thai Mode of Transport 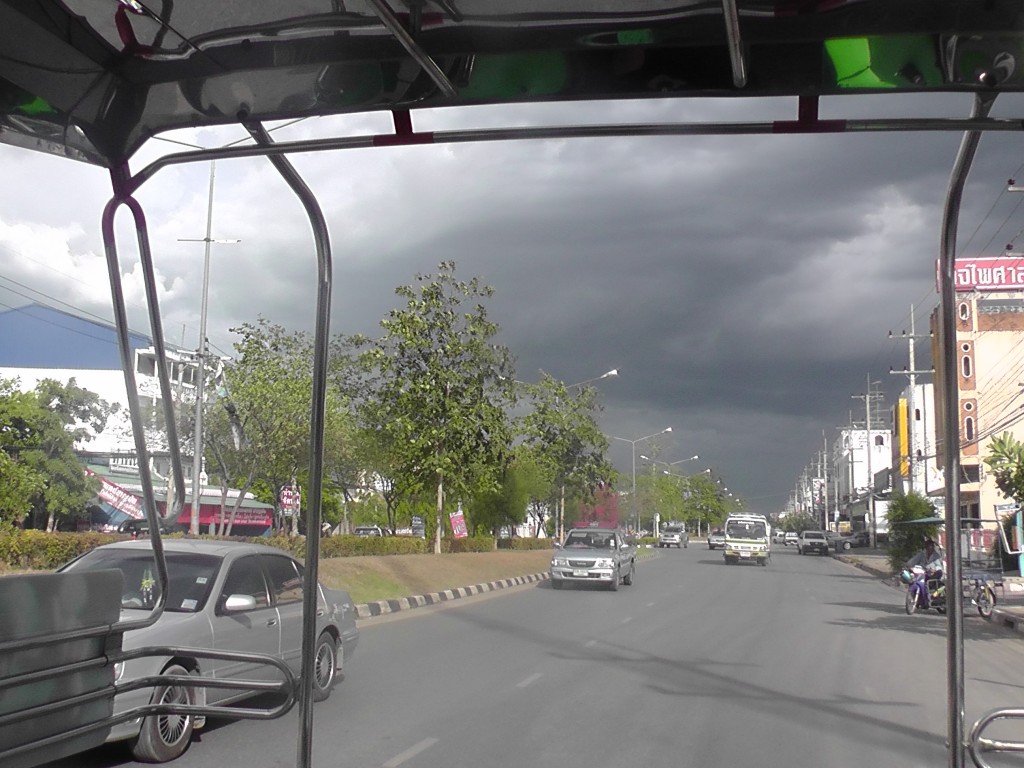 In the back of a pick-up truck, trying to outrun a storm.

We had hoped to spend the afternoon at the Monkey School where rescued animals perform a show but we found that it’s been closed for four months. Not sure of the reason why. We decided on an elephant ride instead. Through Good Times Travel, we went to Wang Po Elephant Camp, about 45 minutes outside down travelling by songthaew (a pickup truck with benches in the back) and trying to outrun an oncoming storm. 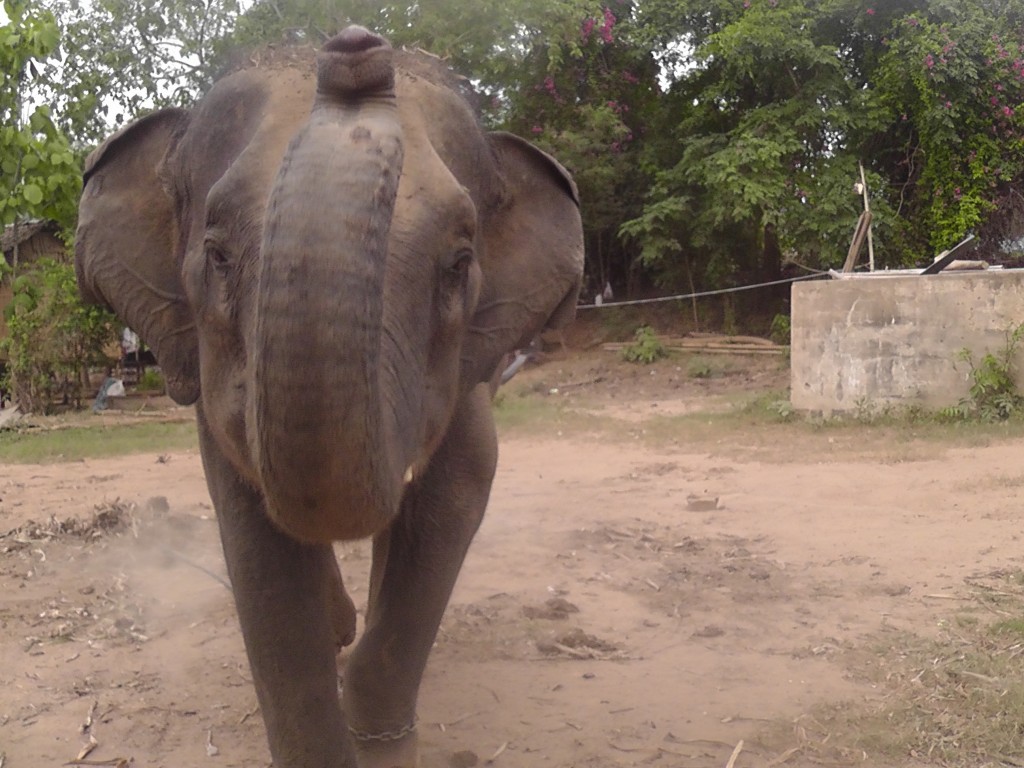 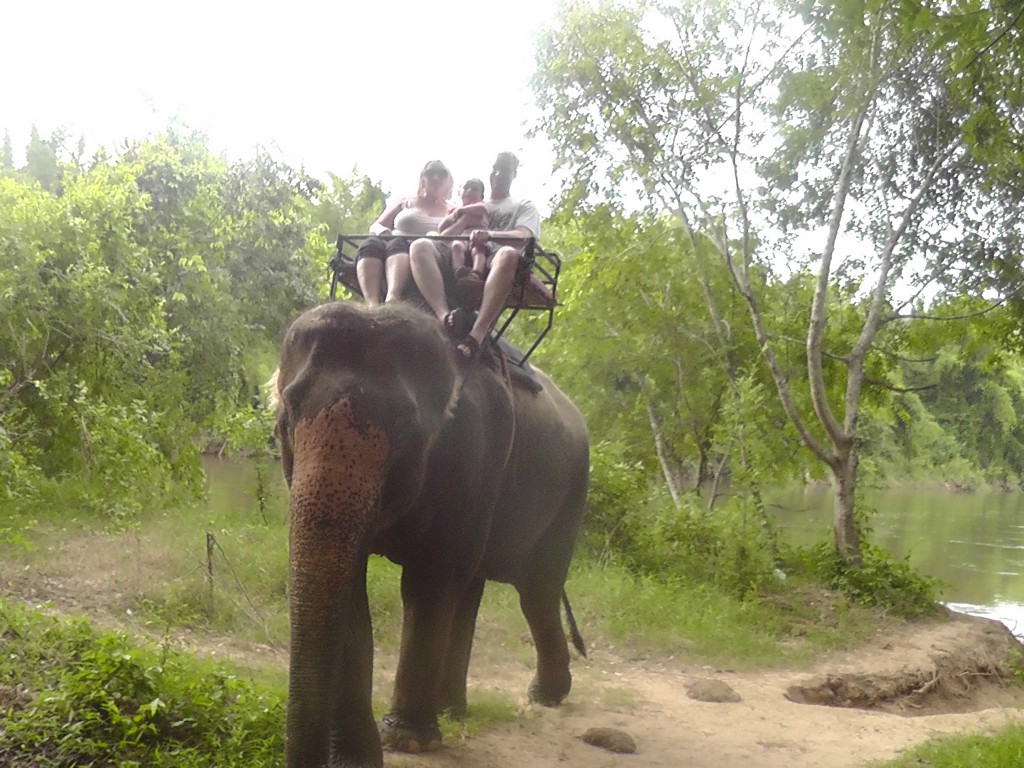 All aboard the elephant express!!

We had a 30 minute  elephant ride which was a bit uncomfortable but kind of fun. It wasn’t very interesting – just down a little track to a river and then back up again. It served the purpose of checking the “Elephant Ride” box. Reuben didn’t seem that into it and was actually pretty scared when the elephant’s trunk came after him for a sniff. One very cute thing, thanks to a book he has about an elephant who sneezes, he refers to elephants as “a-a-aaaatchoo”.

Another thunderstorm cracked down around dinner time. Luckily it was short lived and we made it into a restaurant before the rain started. We ate at Bell’s – a great pizzeria. A nice change from Thai food and not too expensive. Just after we ordered the street outside came alive with a swarm of moths. Big, crunchy, dumb moth-tye things that didn’t seem to be able to fly very well and ended up skidding along the tiled floor of the restaurant. The restaurant staff turned off the lights which helped stop them coming inside. The swarm ended after about 30 minutes, actually I think they all just died of stupidity as the street and canopies above were littered with thousands of moth corpses on our walk home.