1
8
This post may contain compensated links. Please refer to my disclaimer here for more information.

This morning started out lazy again. We ate breakfast, swam in the pool and played in the garden. It’s nice to get a little routine going, even if it is ust for a few more days.

We definitely needed some help getting around today – temperatures were pushing 40 degrees and the sun was burning hot. We found a Kanchanaburi-style taxi (motorbike with a funny little canopied side car) and hopped a ride into town.

We spent an hour at the Death Railway Museum. This is a small but well put together museum detailing every aspect of the Death Railway. The Death Railway was built by the Japanese in World War II to connect the railways of Thailand and Burma and open up a supply route to circumvent Singapore. When I say “built by the Japanese” I mean built by US, AUstralian, Dutch and Brisitch prisoners of war and enslaved Asian labourers from Singapore, Malaysia, Sri Lanka and Indonesia that the Japanese Army captured, tortured and literally worked to death. The museum had enough to hold Reuben’s interest for a little while – trains, models of landscapes, life-sized displays. There are definitely some galleries that wouldn’t be suitable for older children who had more of an idea of what they were seeing. No photography is allowed in the museum.

When it comes to World War II history, Lee and I have decided we know roughly what happened but not a lot of the finer details. We’re happy to find ourselves learning on the road. We had little idea of the extent to which the Japanese Army extended themselves across Asia and the Pacific. In fact we never even knew that Darwin, Australia had been attacked by the Japanese. We certainly didn’t know that thousands upon thousands Asian labours, conscripted and basically enslaved, also suffered in building the Death Railway along with Australia, British, American and Dutch prisoners of war. 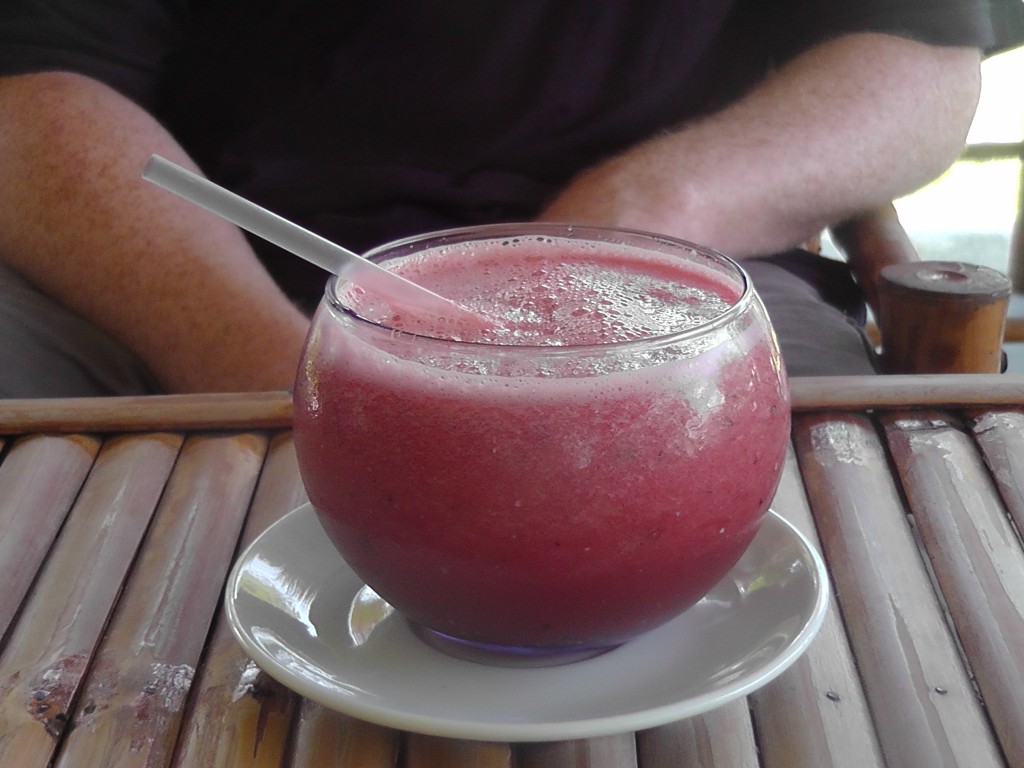 While we still had the use of our Kanchan taxi, we headed across the river to a guesthouse we’ve read about with a fantastic restaurant and cooking school. Apple Retreat & Restaurant did not disappoint. It’s by far the best Thai food we’ve had on our journey so far. The menu was elegant and extensive, with lovely photographs and information on featured dishes. A little more expensive than what we’d normally pay for a meal (100B per dish instead of around 40-60B per dish) but it was worth it for the extra quality. The setting was lovely, indoor-outdoor dining overlooking the river. We had a great meal, sampling some of the standard Thai dishes like pad thai, massaman curry, satay sticks and some little crispy, pastry cups stuffed with chicken and veges along with a delicious watermelon shake to wash it all down. We vowed to return and sample some of the more adventurous items on the menu.

The following day we had arranged a car and driver for the day to explore some of the activities in the surrounding countryside. We used Good Times Travel again but called them directly instead of going through the guesthouse as communication with reception staff isn’t easy. They sent an agent to our room within five minutes of phoning. She was really pleasant and outlined the costs and options. We settled on Hellfire Pass in the morning and Erawan Waterfalls in the afternoon. Lots of people jump on tours in Kanchanaburi which seem like good value and cram lots in. Whole day tours aren’t really an option for us – we have to account for nap times and unexpected meltdowns. The car and driver cost us 1500B for the day including petrol but not including 30B parking at Erawan National Park. 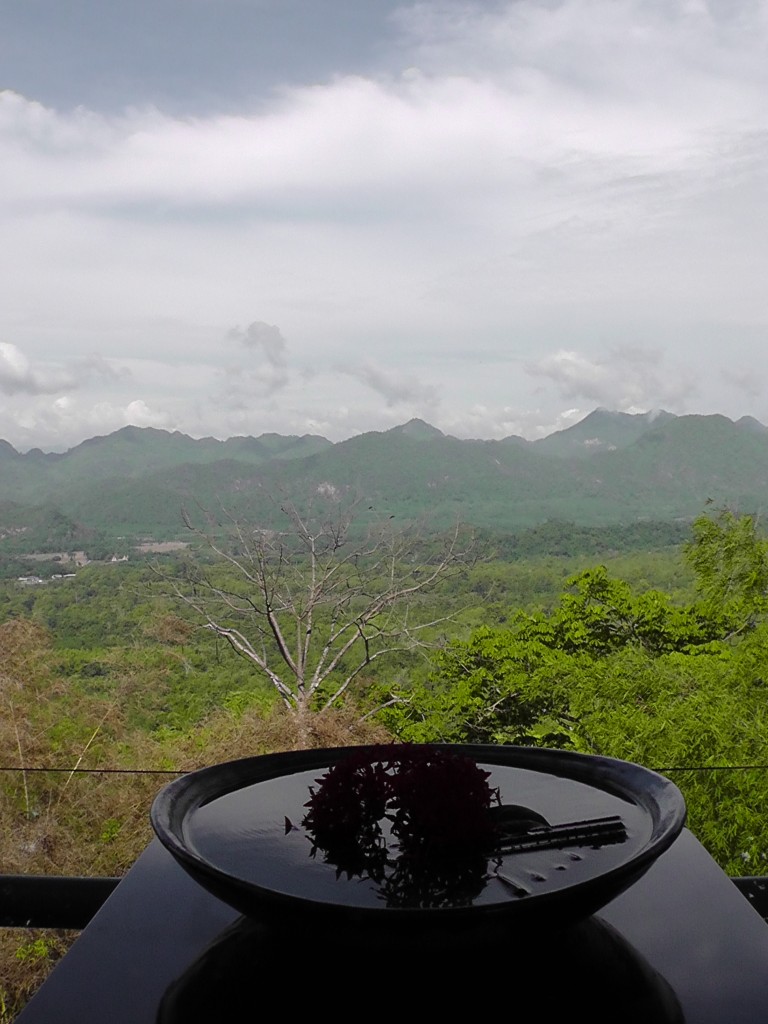 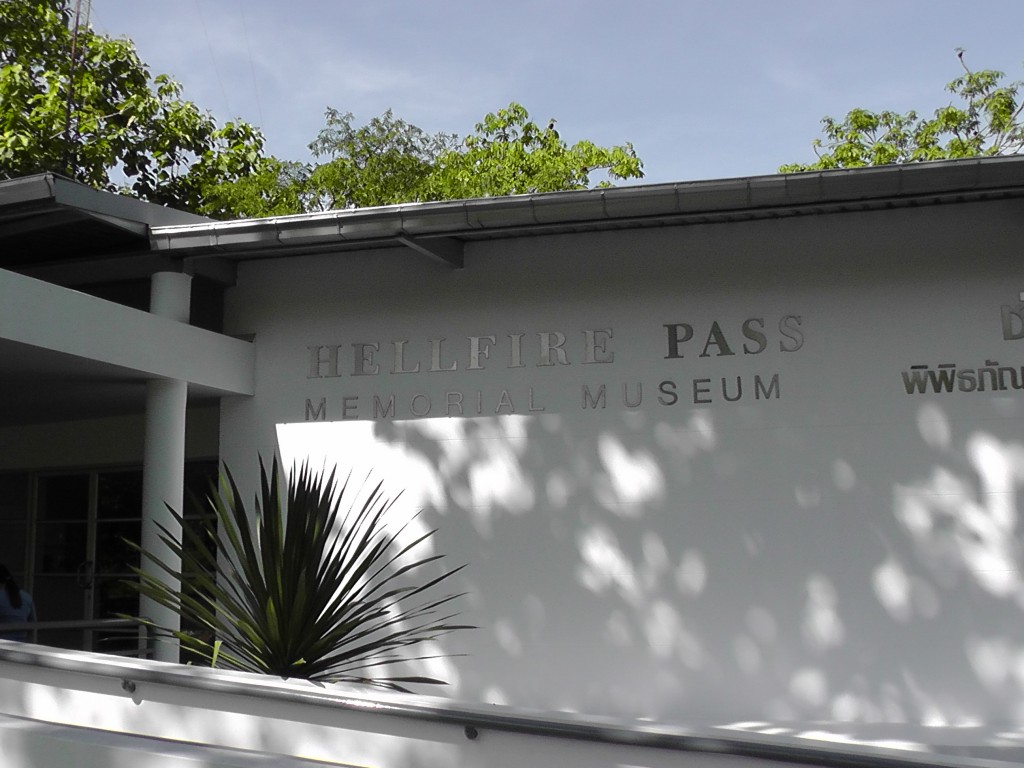 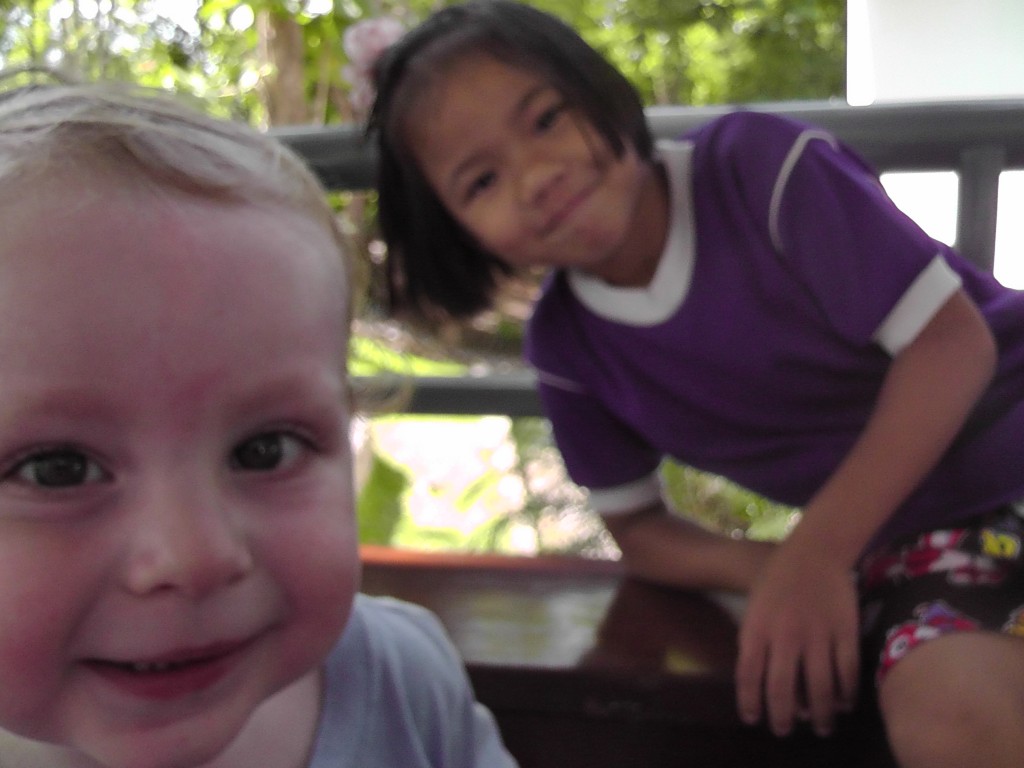 Reuby Making Friends / Entertaining Himself wIth the Camera

We set out around 8am after breakfast and a quick play in the garden. The drive to Hellfire Pass took 45 minutes (not an hour and a half as suggested). We spent about two hours here. First exploring the museum – beautifully done using funds from the Australian government. Admission is by donation only (100B for us) and free audio guides are available if you bring your passport (we didn’t). I spent most of the time here outside trying to stop Reuben from screaming. He was really getting on the other visitors nerves. I get it. It’s a war memorial. You want me to keep my child quiet. But when it’s almost 40 degrees outside there’s only so long I can stand outside the front door. Please don’t shhh me, angry old Australian man. It sucks just as much for me as it does for you. Lee, at least, got a good look around the museum and concluded it was similar to the one in town. 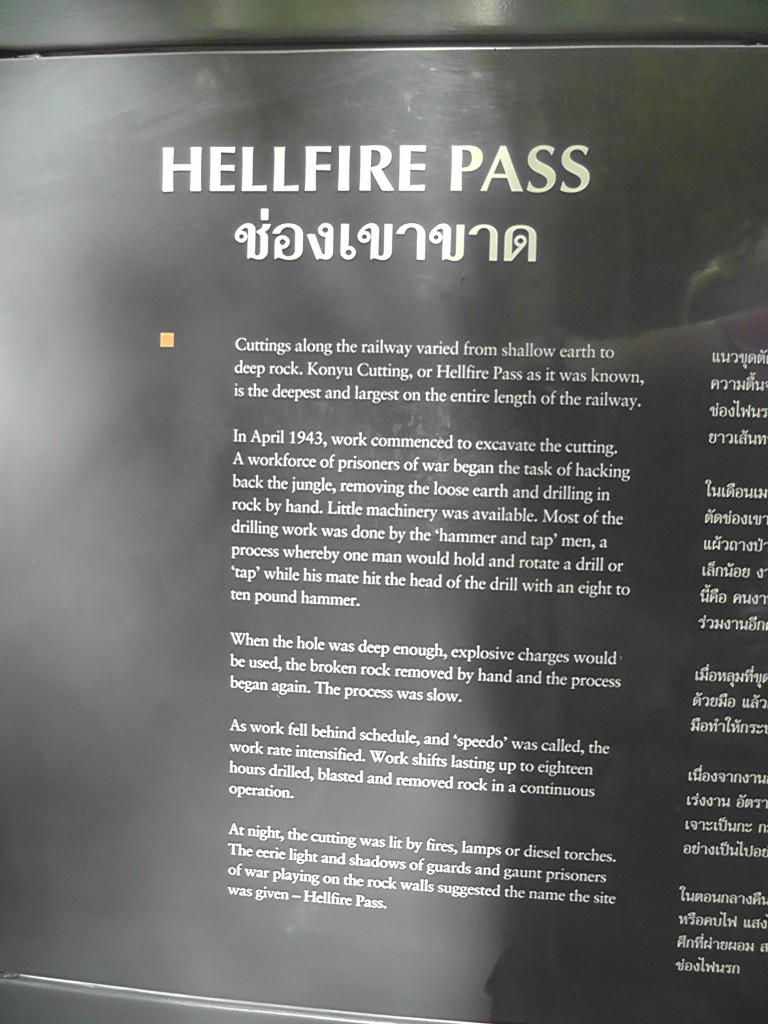 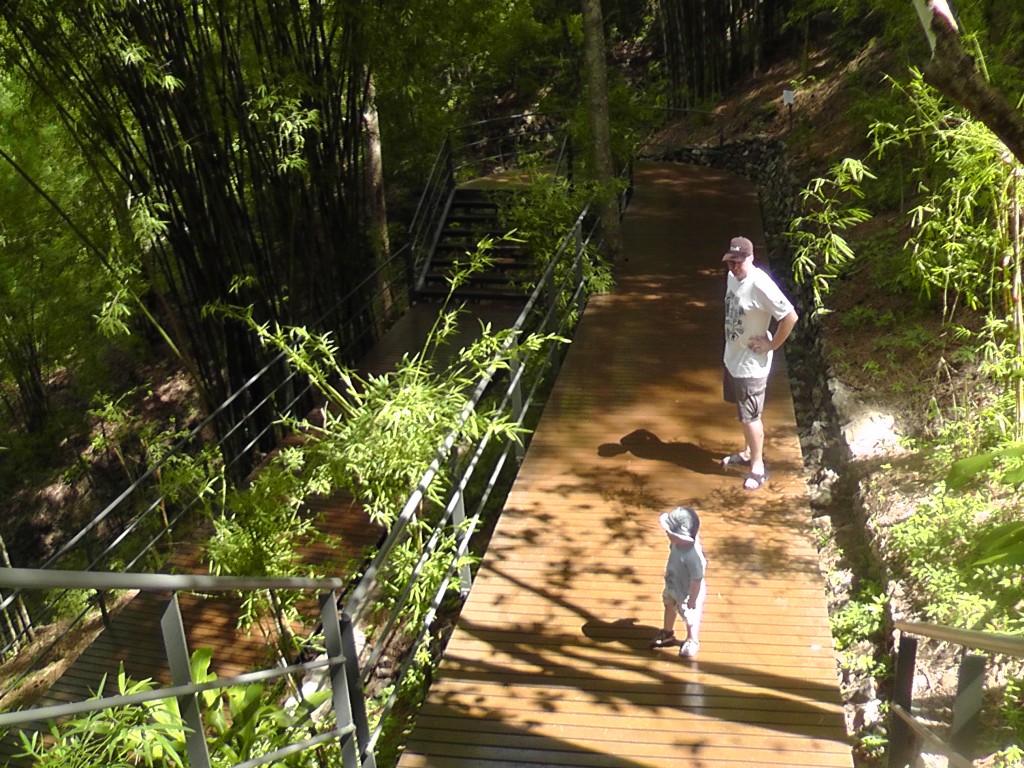 Walking Down to the Pass 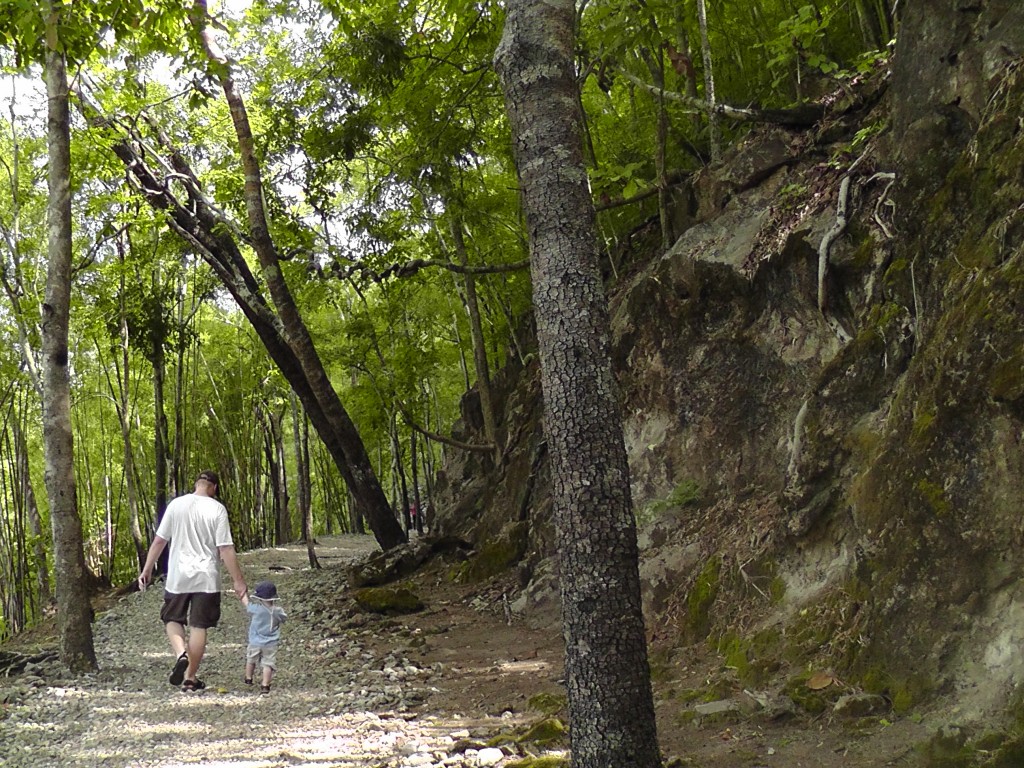 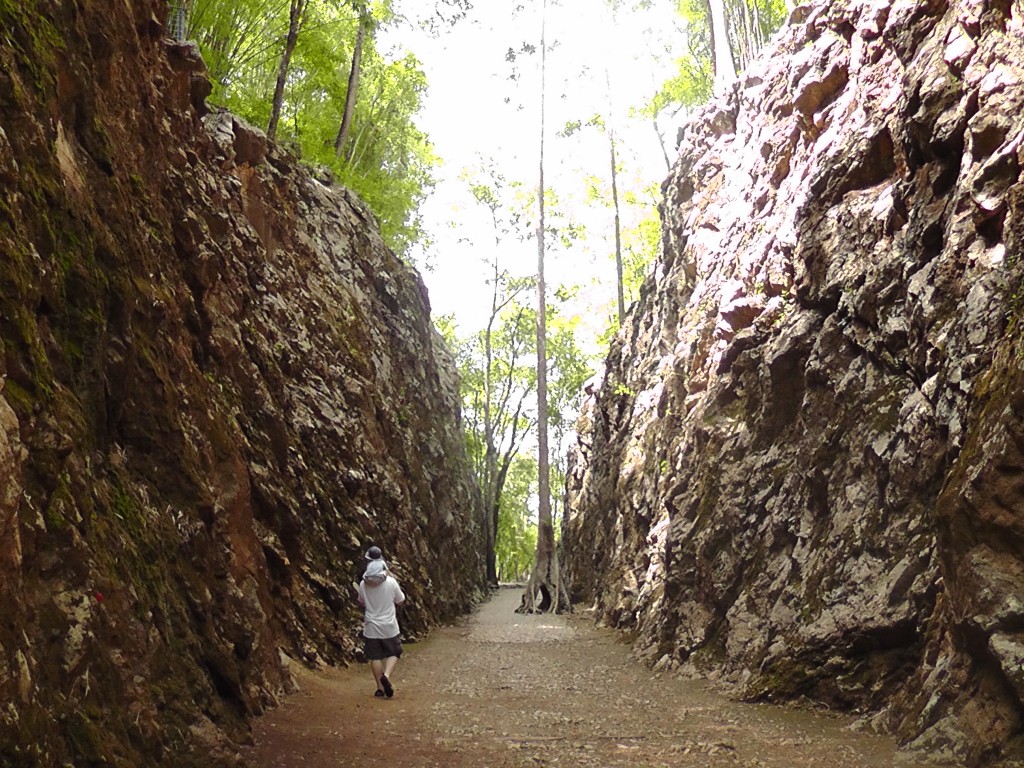 Imagine cutting all of this rock by hand!

We then walked down to the actual Hellfire Pass (also known as Konyu Cutting) which is an area of railway track that was cut from steep rock. The name “Hellfire” comes from the images of the emaciated P.O.W. carving out the rock by hand most of which was done at night by torchlight casting an eerie light across the pass. The walk down via wooden stairs was relatively easy and manageable with children. Little ones, like Reuby, would need to be carried when the stairs get steep. It was super hot but the actual railway track is covered with trees so the sun wasn’t too strong. The walk down and back took just under an hour. It’s suggested you were walking shoes but sandals are fine, provided it’s dry. 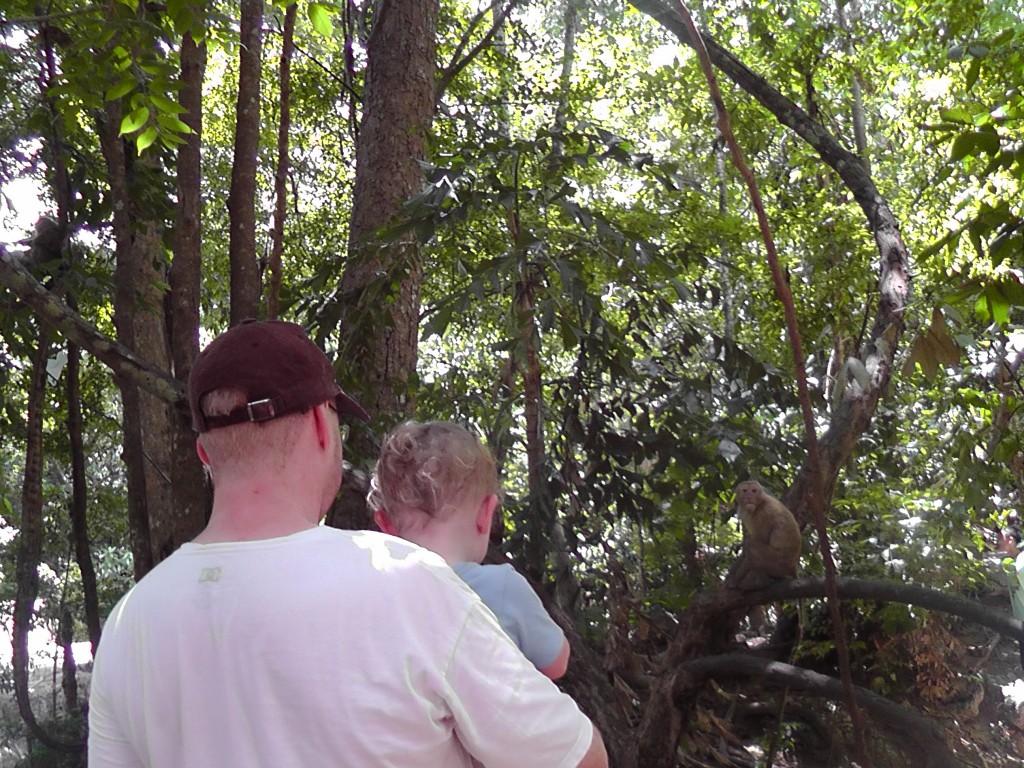 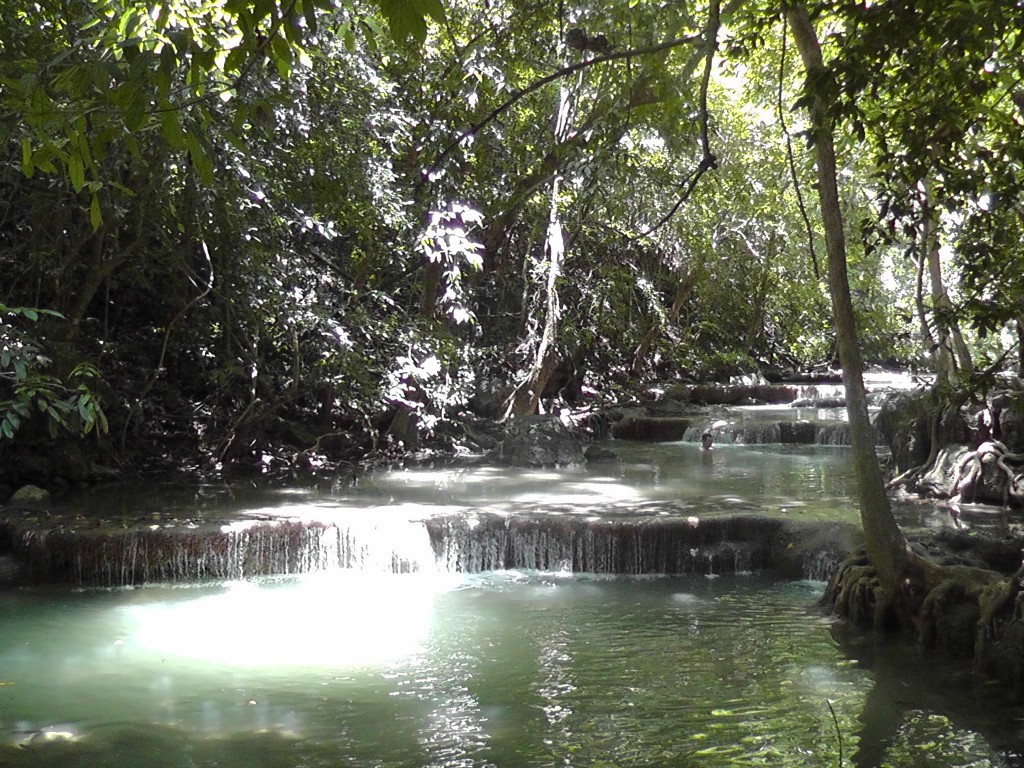 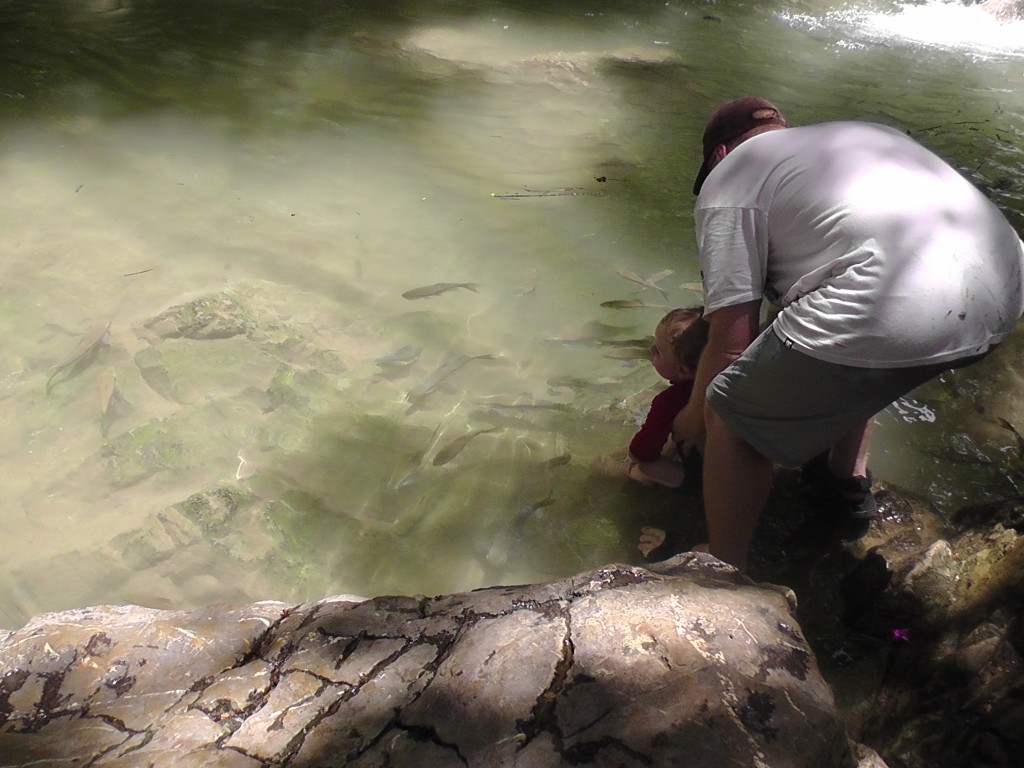 Getting Munched by Fish 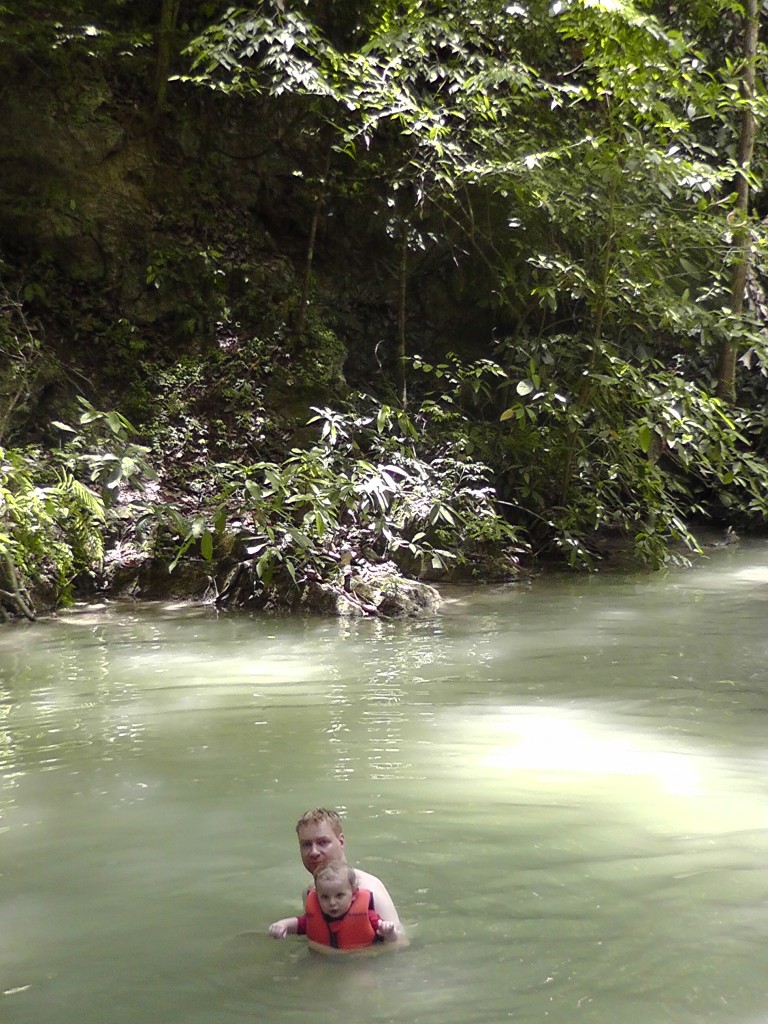 Swimming in the Waterfall Pool 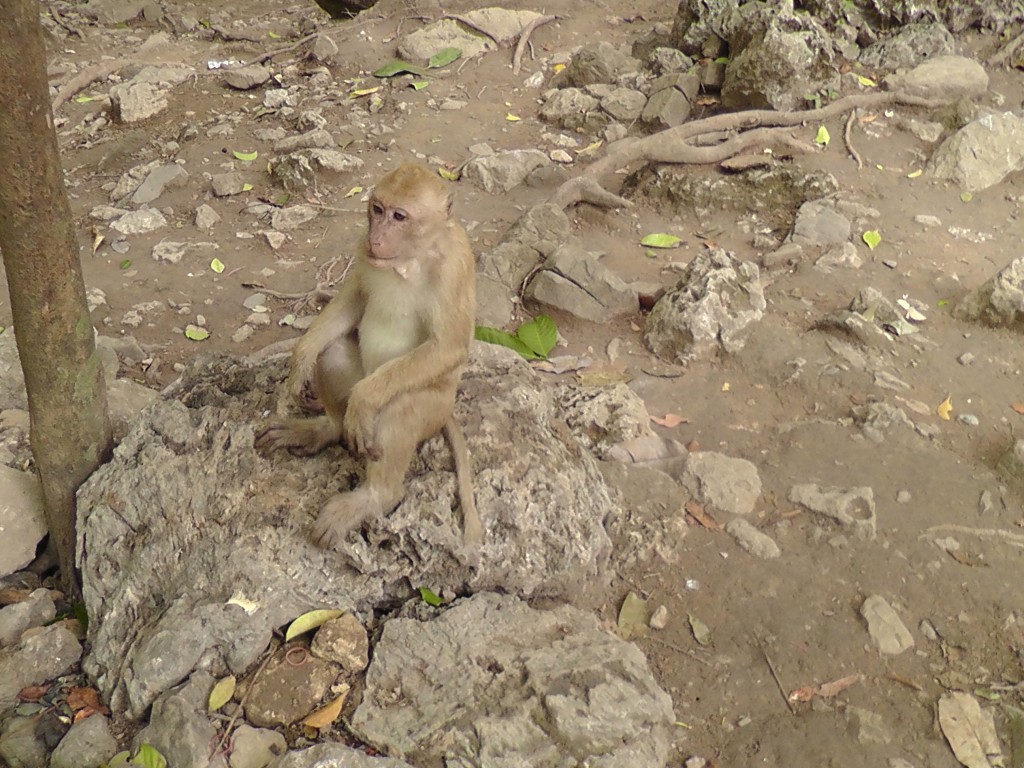 Next we drove to the Erawan National Park. The drive took just under an hour and Reuben slept most of the way. We arrived at the park, paying a whopping 200B each to enter (Reuben free). We ate some lunch and walked up to the Erawan waterfalls – a series of seven waterfalls. We were told we would be able to walk to the first five with Reuby but we only managed two. Most of this part of our day trip was marred by tantrum of  epic proportions. Someone really, I mean really, wanted to bring their blankie along with the trek. It was far too hot and muddy and we just couldn’t risk losing blankie or getting it dirty so we endured terrible behaviour for the first 45 minutes until we finally got in the water at the falls. We were a bit freaked out by the fish nibbling around us. I won’t be getting a foot fish spa anytime soon!!!!! The water was cool and it was quite enjoyable. There were lots of Thai families picnicing and enjoying the water. I’m sure they aren’t paying 200B a pop to enter though! We even spied some rather bold monkeys. We spent about two hours total at the falls.

The drive back to Kanchan took over an hour. We jumped straight in the pool when we got back to the guesthouse – we’d worn our swimming togs back in the car so we were wet anyway. 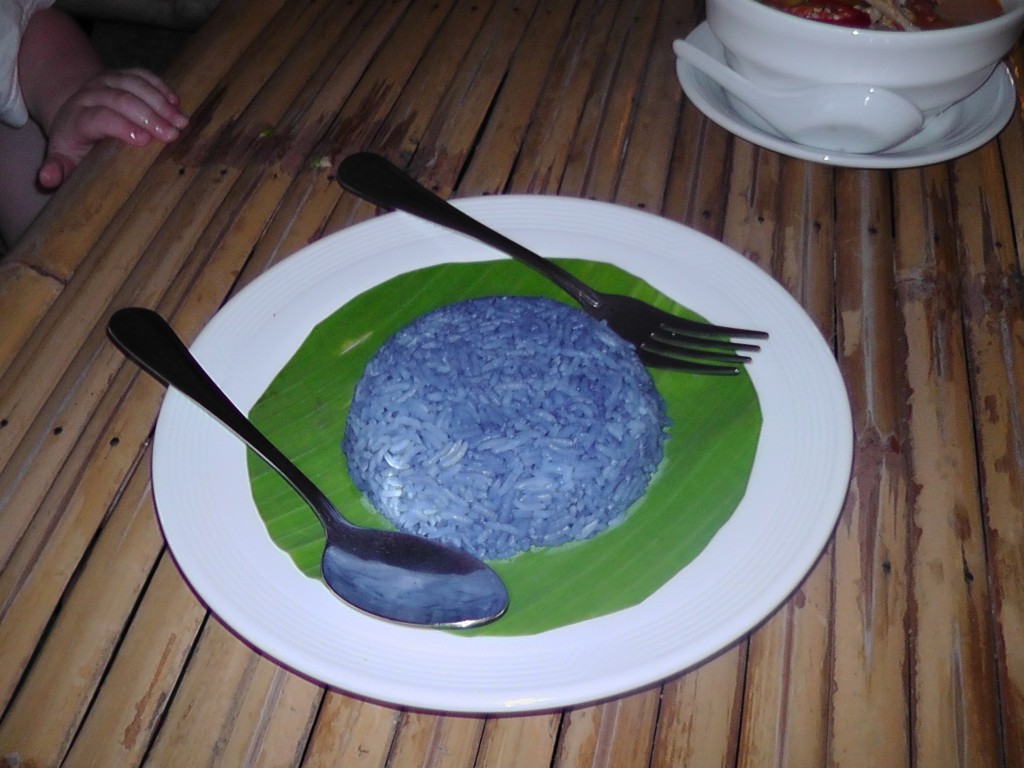 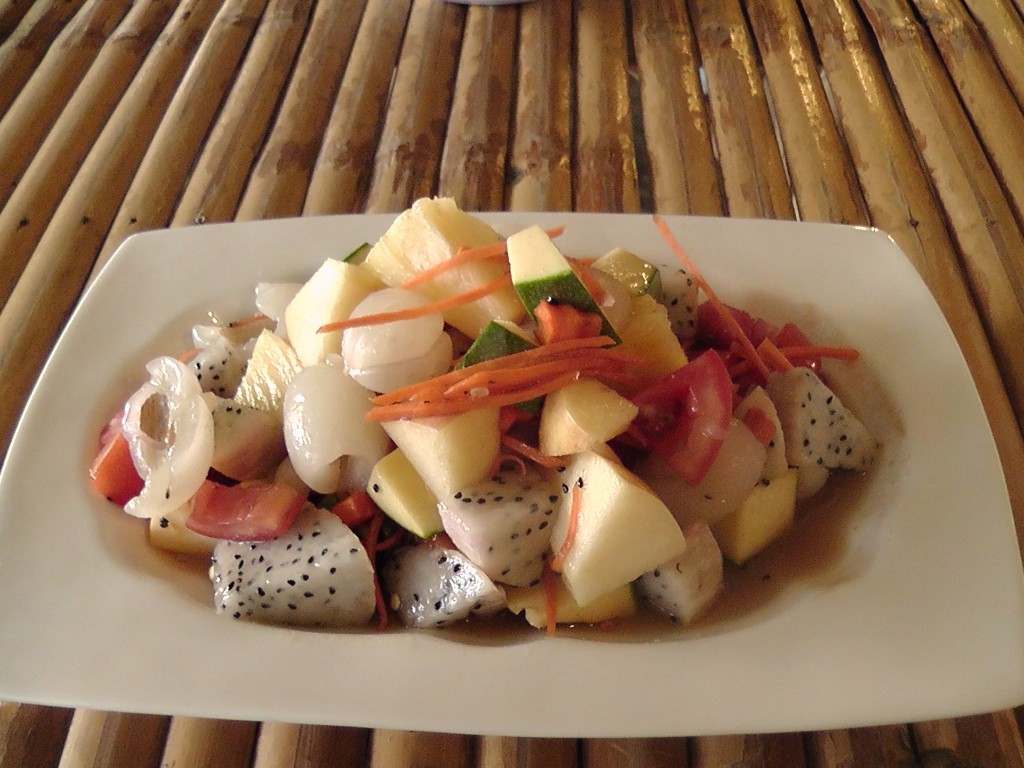 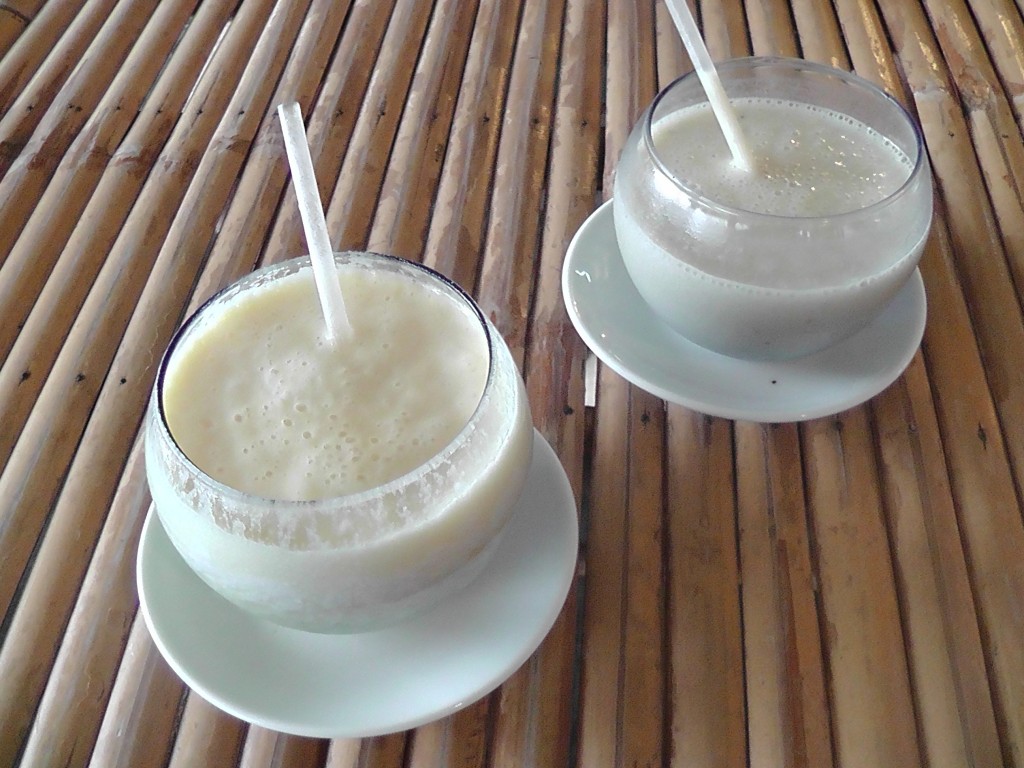 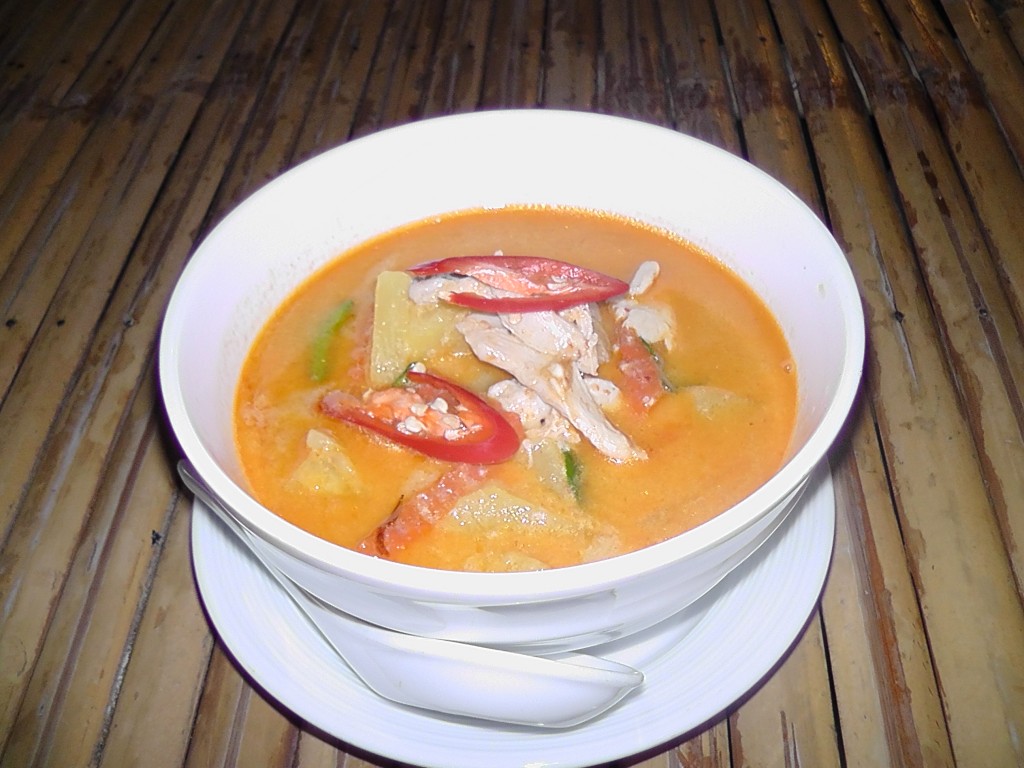 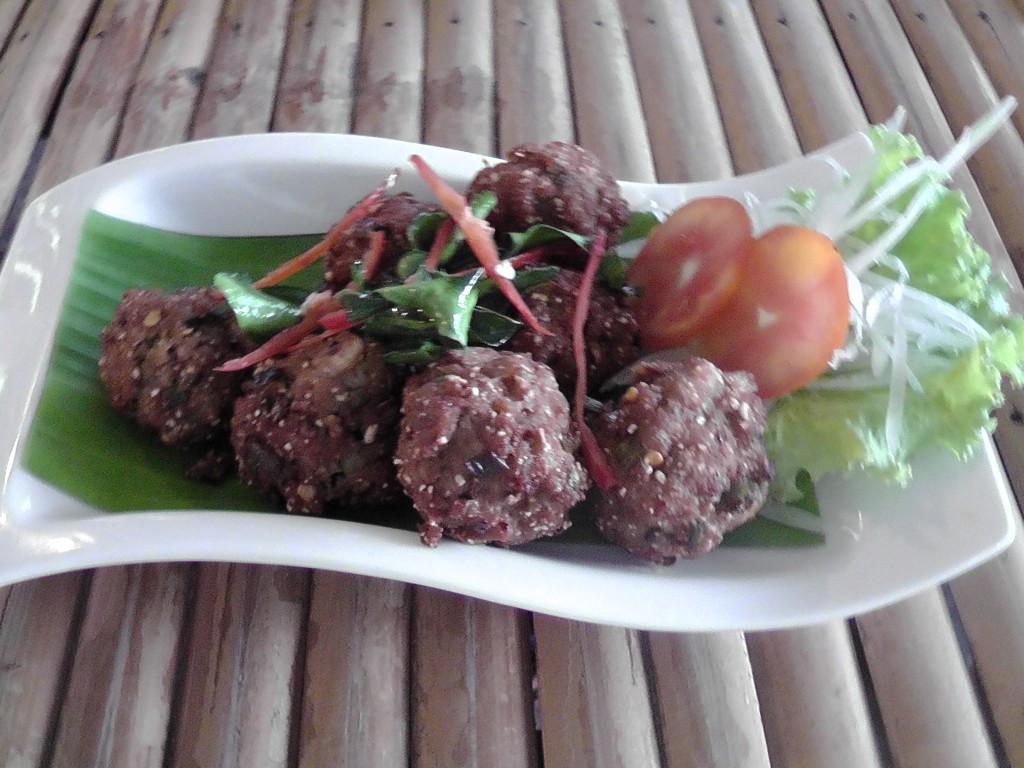 In the evening we went for another delicious meal at Apple. This time the co-owner Noi was there. She chatted to us throughout our meal telling us about Thai cuisine and the restaurant and cooking school business. Tonight we tried a few more dishes – a spicy fruit salad to start which a chilli-lime dressing, pork balls, red curry, pineapple & cashew stir fry and blue rice coloured with some kind of pea flour. To drink – banana shake for Lee and pineapple shake for me. Reuben found the pork balls a little spicy to start so Noi offered him a wet piece of palm sugar which really helped to cool his mouth. It was delicious, like eating fudge.

Over dinner, we reflected on how fortunate it is that we are who we are. After what we’ve seen and heard about over the last few days we’re incredibly thankful for those who suffered in the name of our freedom. We would do anything to ensure that Reuben doesn’t end up in a dire situation like this. Lucky for him, chances are very slim that anything like this will happen to him. We’ve also decided we’re more interested in WWII history than we thought. We’ll definitely add some into our travels in Europe.