Morocco seeming to be calling my name at the moment. Every time I tune into a travel or cooking programme on TV, there it is. I’m stumbling upon blog posts about it constantly. Morocco has never been a place on my wish list but it’s luring me in with it’s bright warm colours, promises of delicious stews and sticky, sweet desserts. Any country that favours mint tea over a Starbucks Frappacino is good in my books. It’s no surprise then that when I offered up my blog to guest posts, one of the first to come along was a post on Morocco.

‘Madam, you want to buy something?’ We have arrived in Marrakech in one of its many souks. Being a woman I was naturally attracted by all the glittering jewelry, the vibrant colours of Moroccan pottery and the smells of delicious spices. I could have spent hours in the souks. Well… actually, I did as we got hopelessly lost in the labyrinth of the medina. I am convinced that the vendors produce false maps, so that tourists get stuck in the souks for as long as possible. It couldn’t possibly be my map reading. 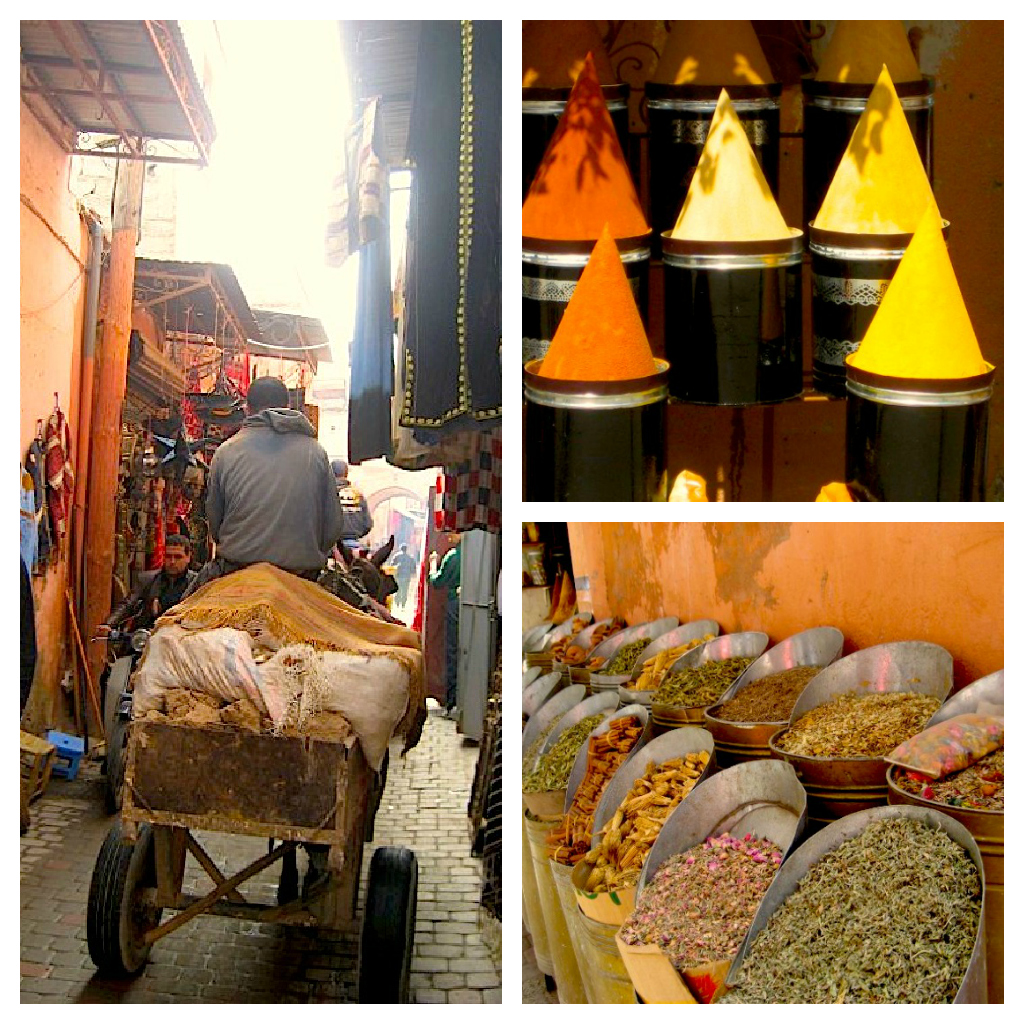 Spice Shopping at the Souk 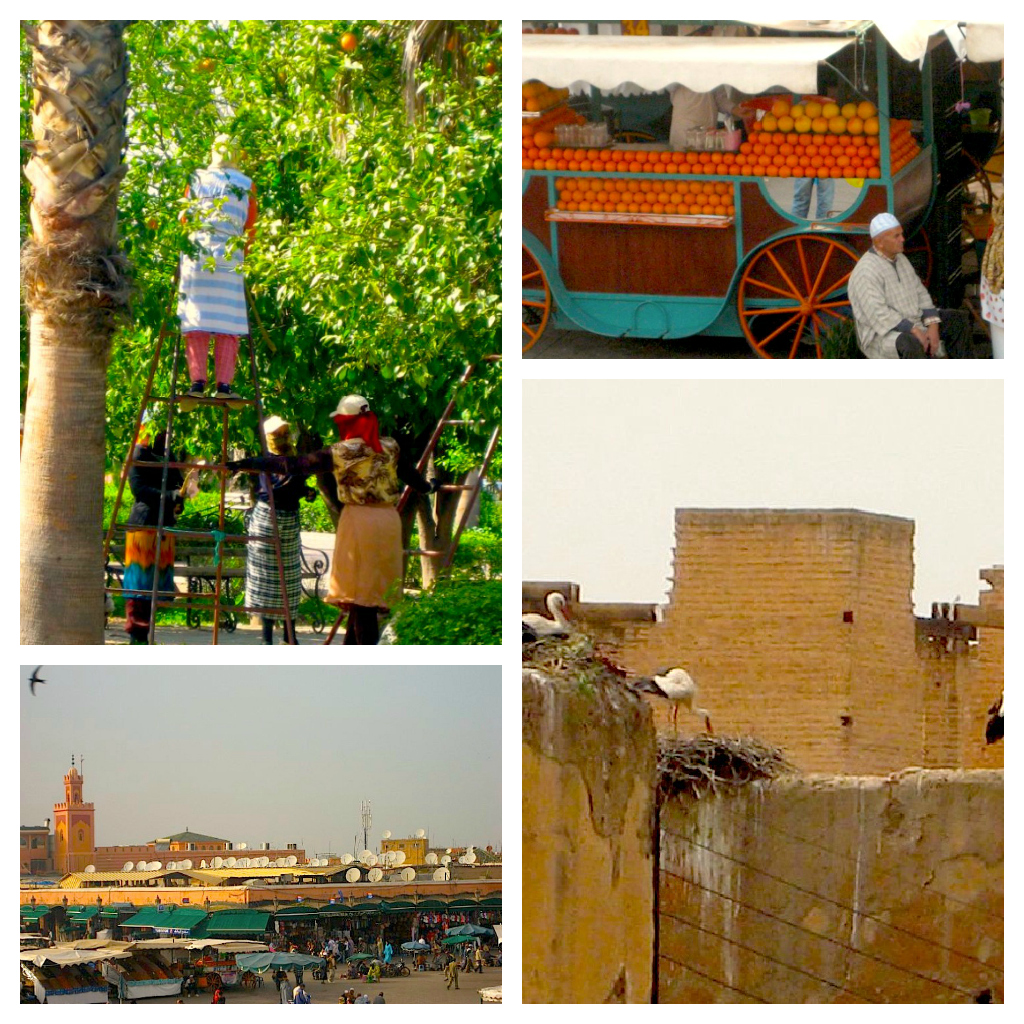 Oranges Picked Fresh Off the Trees at Djemaa el Fna

When we finally made it out of the souks after hours, we were in desperate need of a cold drink and some food. At Djemaa el Fna we were spoiled for choice. We got some freshly squeezed orange juice from one of the many street vendors for about $1. Deliciously sweet, fresh and cold, I have never tasted orange juice as good as this. The Moroccan food didn’t disappoint either. Sitting in a restaurant by the square, trying different stews prepared in the traditional tanginess, whilst watching groups of acrobats, drummers, snake charmers, story tellers, and dancers, was the perfect way to end our day. 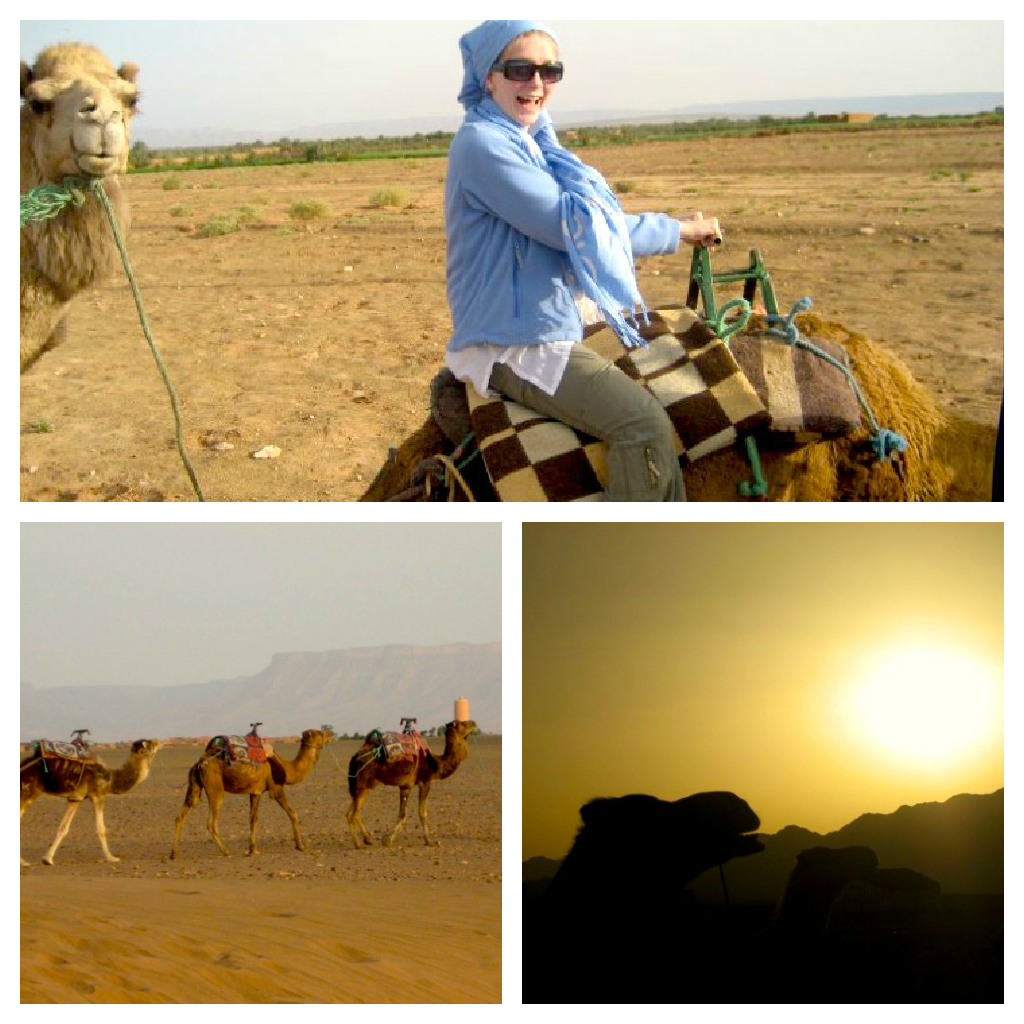 Adventures on Camel Back

Fighting through our camel sores

Now we got a taste of Moroccan city life we were very keen to see some of Morocco’s countryside as well. We embarked on a three-day trip, which would lead us into the Atlas Mountains, Hollywood film sets and the Sahara. Ever since watching Lawrence of Arabia as a child I have always dreamed of spending the night in a desert and riding on camels. We were certainly able to ride on camels-a lot! To get to our tent in the middle of the Sahara, where we would spend the night, we had to embark on a two hour camel ride. Camels are not the most comfortable animals to sit on and to say I was quite sore is an understatement. Nevertheless it was quite fun and the camels were mostly very well behaved. 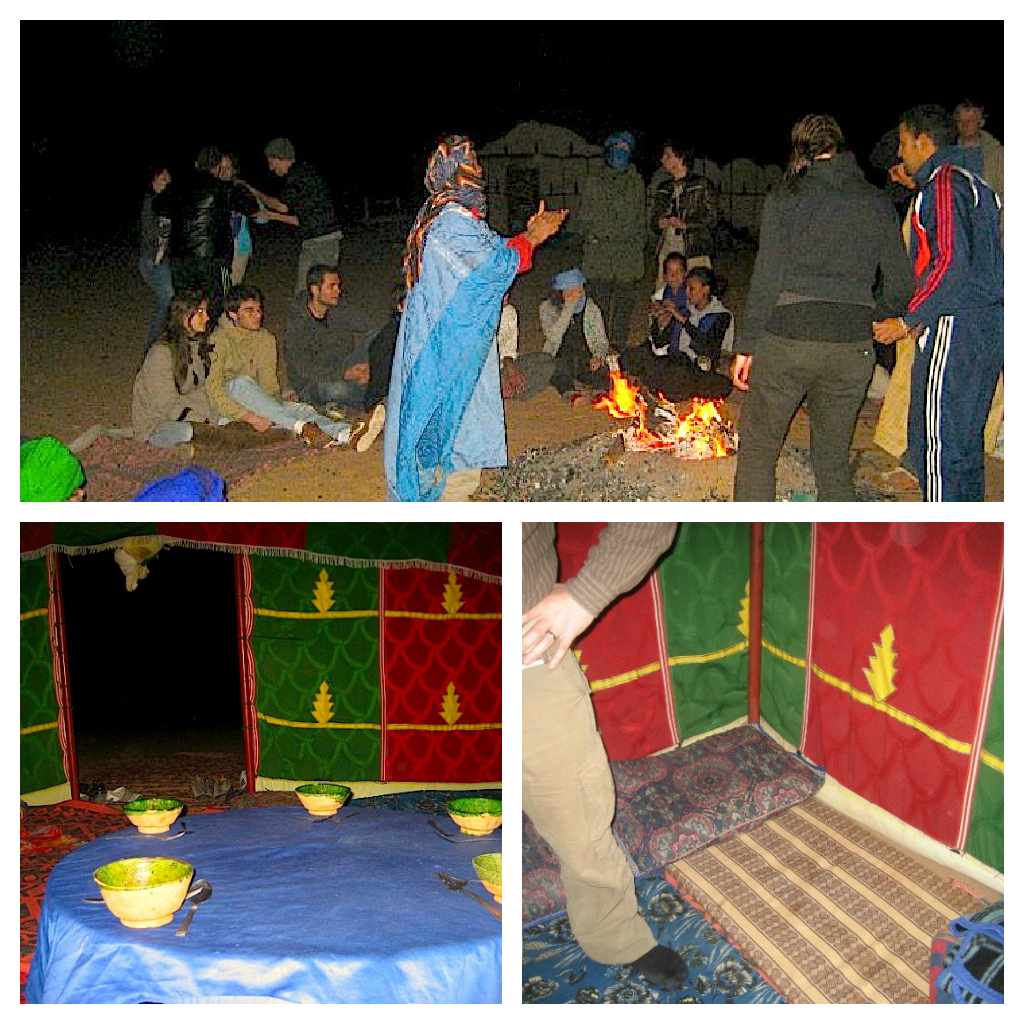 When we finally reached our spot for the night we were given sweet mint tea and some freshly created Moroccan food, which was delicious. We all sat around the bonfire whilst some nomads sang traditional songs for us. When we saw the tent we were supposed to sleep in we were quite disappointed to see that we had to share a tent with a large group of fellow travelers though. It was a very short night, as there was lots of snoring going on due to the fact the most male travelers had a lot to drink that night. So not really the romantic night in the Sahara I had in mind. When Chris and I couldn’t take the snoring any longer we sneaked out of the tent, sat next to some sleepy camels and watched the sun rise over the Saharan sand dunes. It made up for the uncomfortable night, as it was such a beautiful sight. After breakfast we had to go back on the camels again to get back to our minibus, which was another 2-hour ride. Ouch! 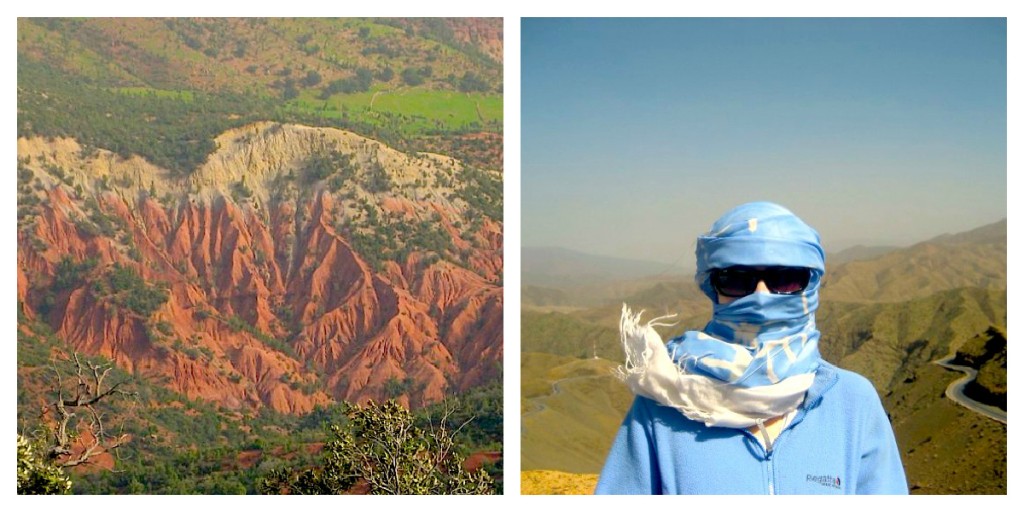 The vibrant colours of the Atlas Mountains

Back in the minibus we drove towards the famous Atlas Mountains. To say that the roads were scary is an understatement. Safety barriers are a nice to have in this part of Morocco and I was praying for life a few times. It was only afterwards that I found out that this road is known as one of the most dangerous roads in the world. Why didn’t tell me anybody before? We survived it though and made plenty of stops at viewpoints with some extraordinary views. But unfortunately we didn’t have time to do any trekking. It was a great shame as the mountains were stunning and so colourful.

In search for Maximus Decimus Meridius

Next stop on our tour was Aït Ben Haddou, which some of you might recognize as the film Gladiator was filmed there. To get to the town we had to cross a river. Chris chose to take his shoes off, but I thought it was more fun going on a mule, despite my sore bum.

Crossing Over to Aït Ben Haddou

We did a little tour and a man, who was an extra in the film, invited us to his home for some mint tea. He proudly showed us some film memorabilia and photos of him and Russel Crowe. It was such a sweet little town to visit and with all the mud buildings the traditionally dressed locals and narrow alleys I was convinced that Russell Crowe would turn up any moment to whisk me away on a horse. He never did. 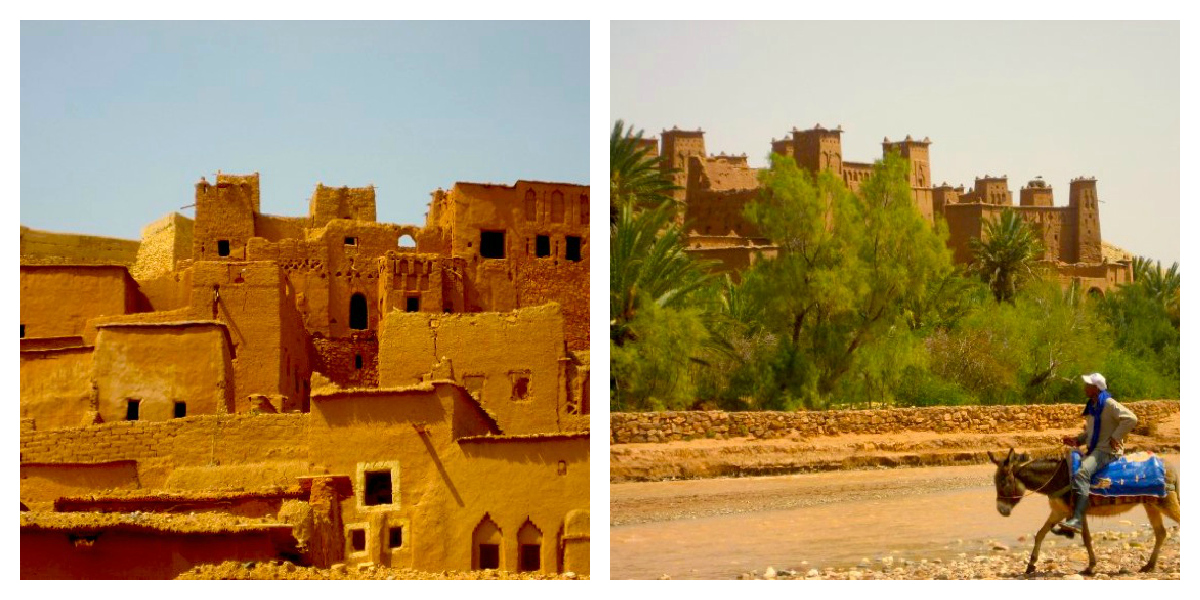 In Search of Russell Crowe at Aït Ben Haddou

After that it was unfortunately time to say goodbye to Morroco. I loved every minute of it and will definitely go back one day! 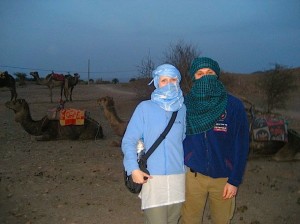 Tammy from Tammy & Chris on the Move hails from Germany, and is therefore both efficient and punctual. Chris is hailing from the UK, which means he likes to talk about the weather, be polite, or sometimes even both at the same time. They both have civil service backgrounds, but have left their bowler-hats back in London and are currently working on justice and human right issues in Cambodia. Whenever they get some time off, they travel around South East Asia or plan in which country they will live and work in next. Follow their journey on their blog, Tammy & Chris on the Move, on Twitter or on Facebook.