7
10
This post may contain compensated links. Please refer to my disclaimer here for more information.

Swimming with sea turtles in Hawaii would have to go down as one of the most beautiful and incredible experiences we’ve had together as a family. Taking a swim with sea turtles was an almost surreal treat and one that I would encourage you to add to your Big Island itinerary.

When we decided to go to Hawaii, I asked my friend Mary who lives on the Big Island… “Where can I swim with sea turtles?” As a local, I knew she would have the answer and she promptly gave me a list of where to see sea turtles in Hawaii. We saw a couple of Hawaii sea turtles sitting on the beach at Punalu’u on our way around the Big Island. We also stood right next to a sea turtle swimming in the lagoon at the Hilton Waikoloa Village. But the best experience by far was swimming with them over in Hilo!

Swimming with Sea Turtles in Hawaii 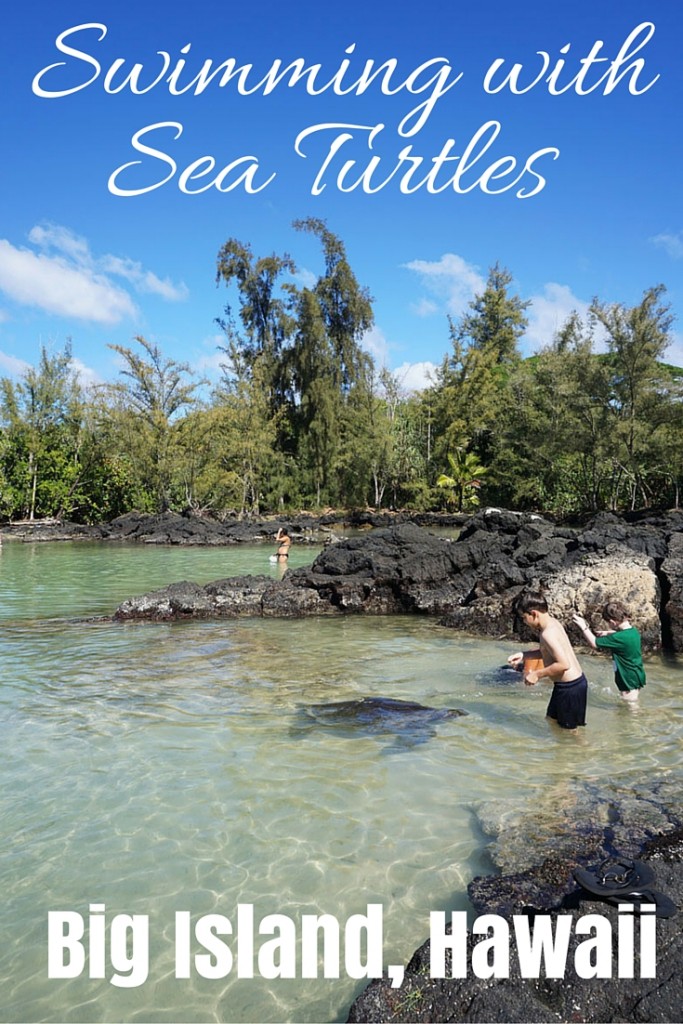 Where to Swim with Sea Turtles on the Big Island

The Hawaiian word for turtle is “honu” and you’ll quickly learn it as there is plenty of signage around about respecting the honu when you’re at the beach park. See below for my paragraph on how to swim with turtles safely and respectfully.

There is limited parking at the beach park and it was very busy the weekend we visited. Mostly with locals, rather than tourists, many of whom were picnicking in the park or having birthday parties under the gazebos. I can imagine that visiting during the week would be much less crowded. There are restrooms, showers and drinking fountains as well.

The lava rock and surrounding reef make the water very, very calm and easy for kids to swim in. The water was a lovely temperature when we visited in January, very easy to jump straight into the water.

The Carl Smith Beach Park is by far the best place to see turtles in Hawaii that we encountered on our travels. We did see turtles on the beach in a couple of other locations on the Big Island but the weren’t nearly as active or interested in humans.

Pictures of Swimming with Turtles in Hawaii

Here are some pictures of us swimming with sea turtles in Hawaii. As you can see I could not stop taking photos of Reuben and his friend T swimming with the turtles. It was such a beautiful experience! Being in Hawaii swimming with turtles is an absolute must-add item for your bucket list. 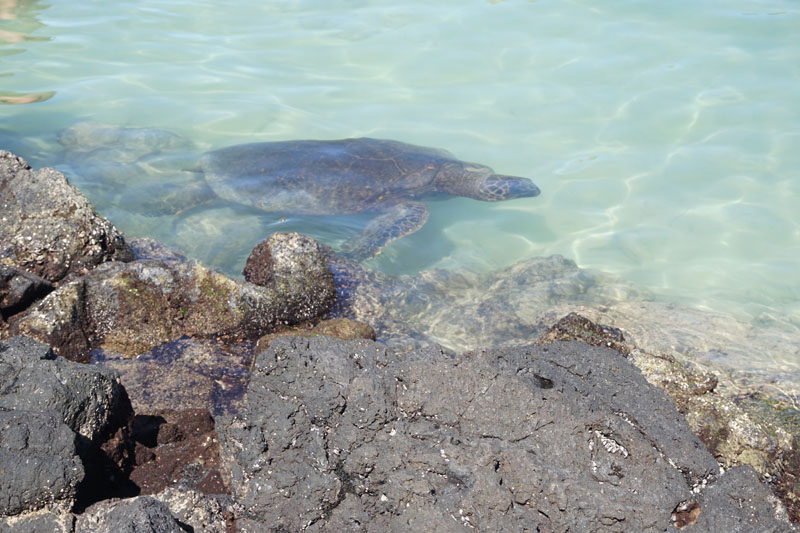 Watching the Hawaiian turtles swim in the shallow water at Carl Smith Beach Park on the Big Island of Hawaii. 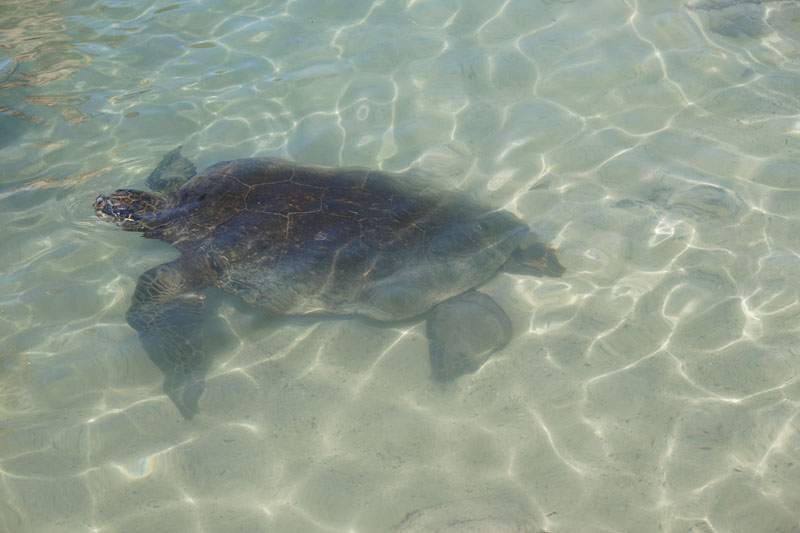 It was fascinating enough just to watch them swim around in the clear water. 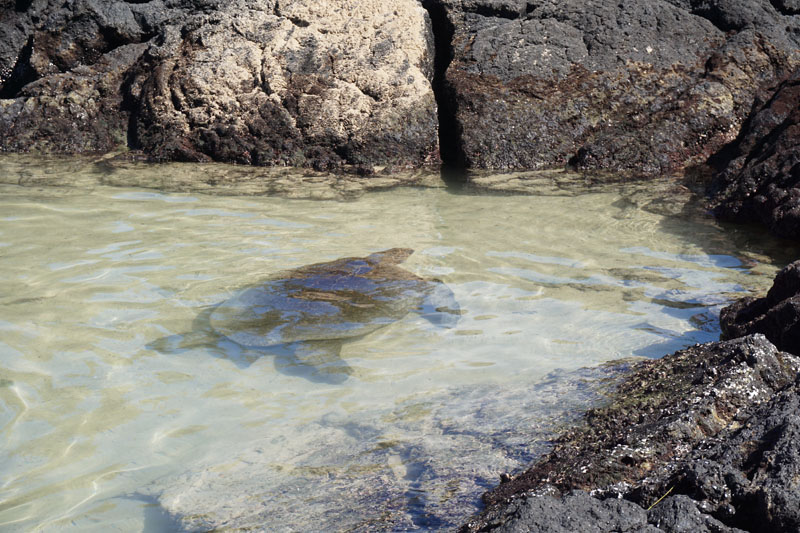 The turtles seem to enjoy the shallow water close to shore. 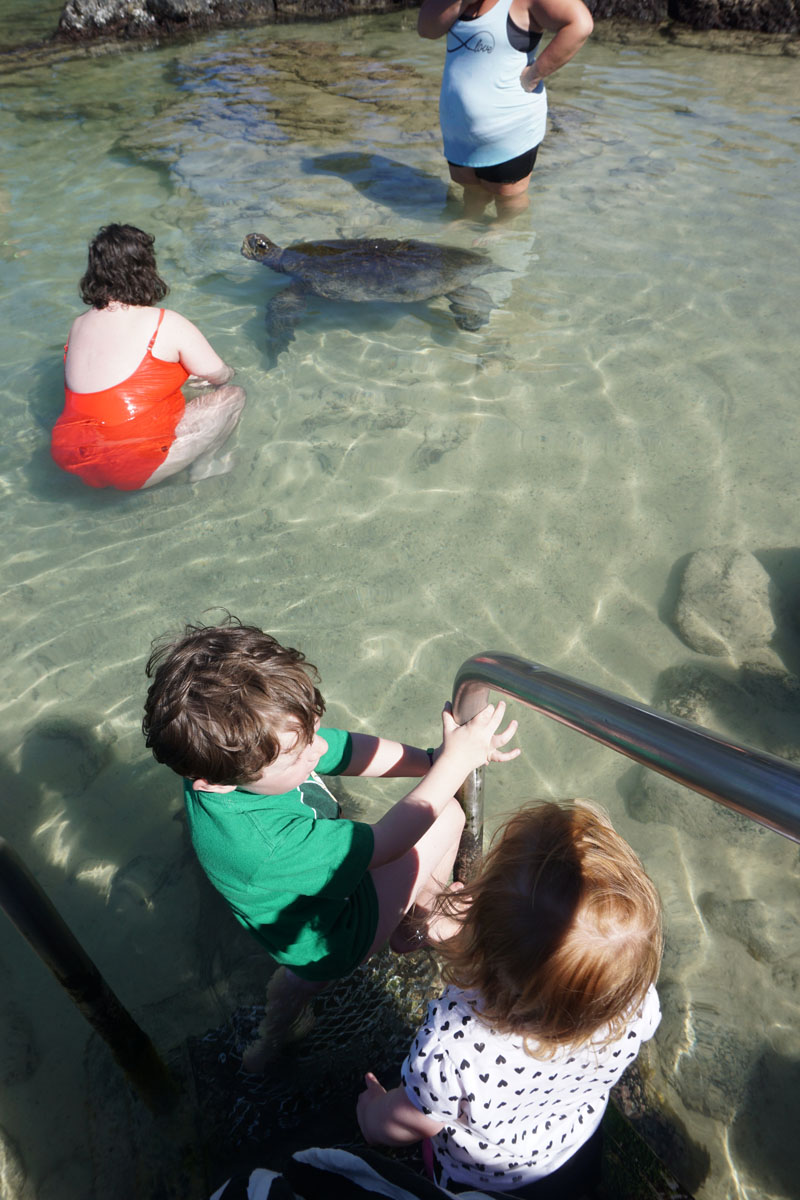 The kids climbing down into the water to see the turtles up close. 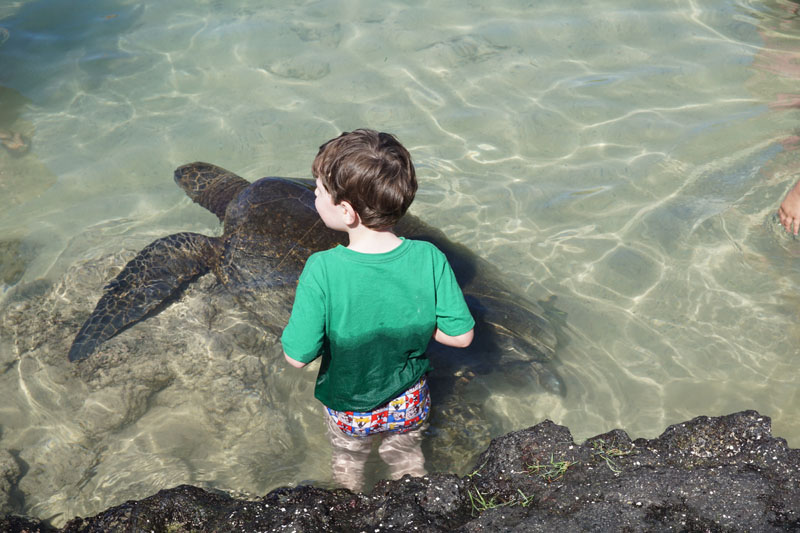 Reuben got a little scared when the turtle first started to swim near him and he backed right up against the rocks. 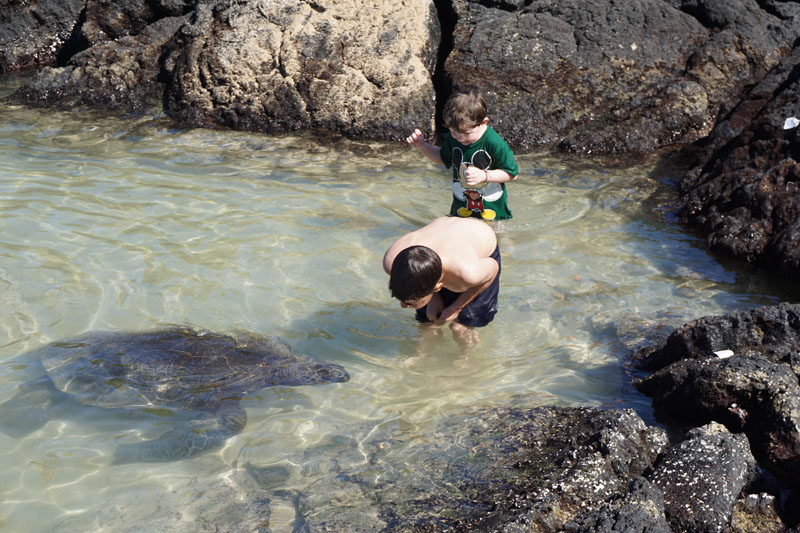 The boys quickly learnt they had to respect the turtles and to look but not touch. 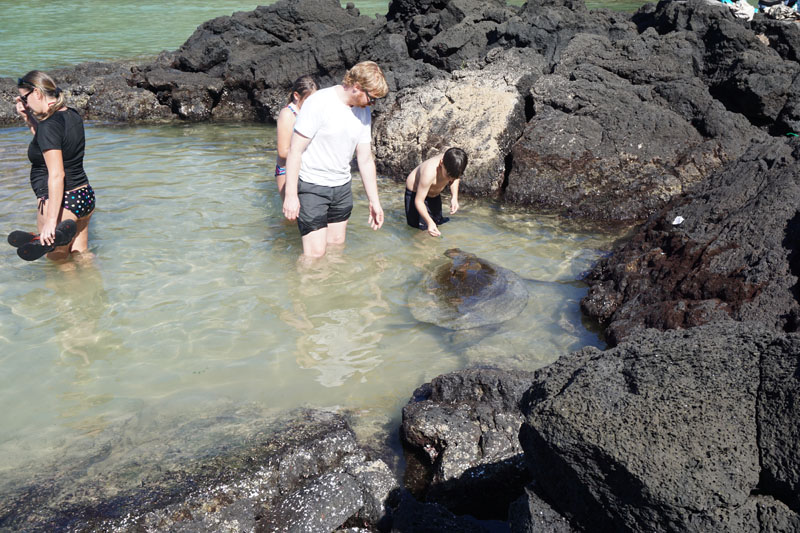 Lee jumped in for a quick paddle with the turtles. How could you miss out on this! 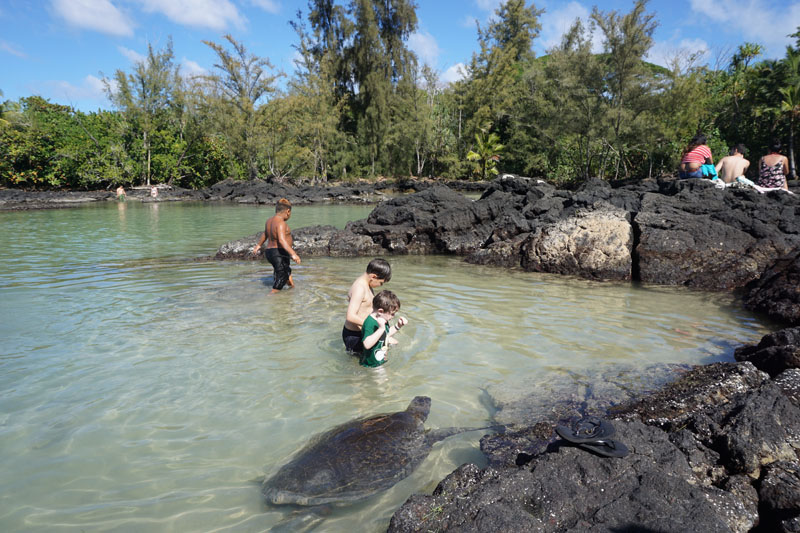 This turtle couldn’t get enough of the boys! He followed them around for ages, trying to nibble on Reuben’s green t-shirt. (I think he thought it was grass!) 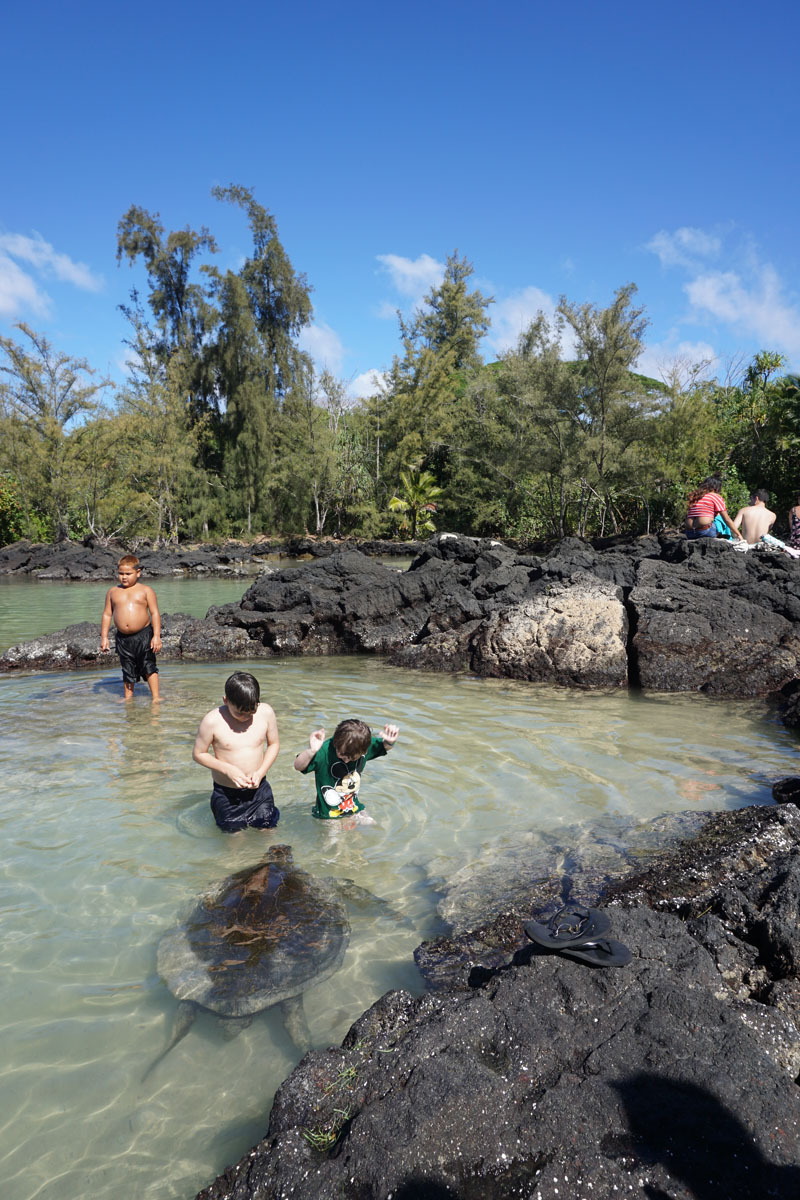 We spent close to an hour with this one turtle. 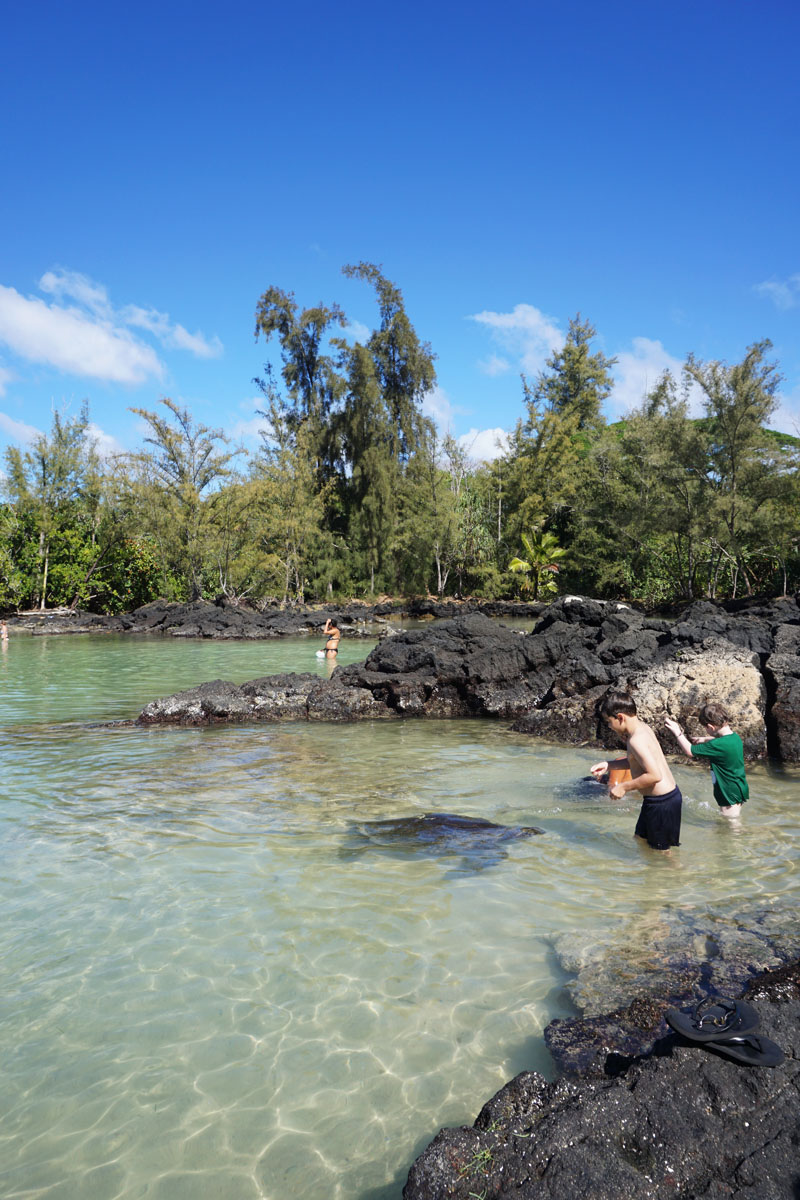 What’s It Like to Swim with Sea Turtles Hawaii

Swimming with the turtles in hawaii was a dream experience. The turtles were just so friendly. We actually couldn’t believe how easy going they were and how interested in the children. The two turtles we saw seemed to have no reservations about swimming up and around us as we stood and waded in the shallow water.  Swimming with turtles wasn’t at all scary despite the surprising size of the Hawaiian turtles when you are up this close to them. Five-year old Reuben was completely comfortable in the water with this amazing sea creatures. Along with his friend T, the two of them probably spent close to one hour in the water with the turtles.

I think this photo says it all… pure joy! 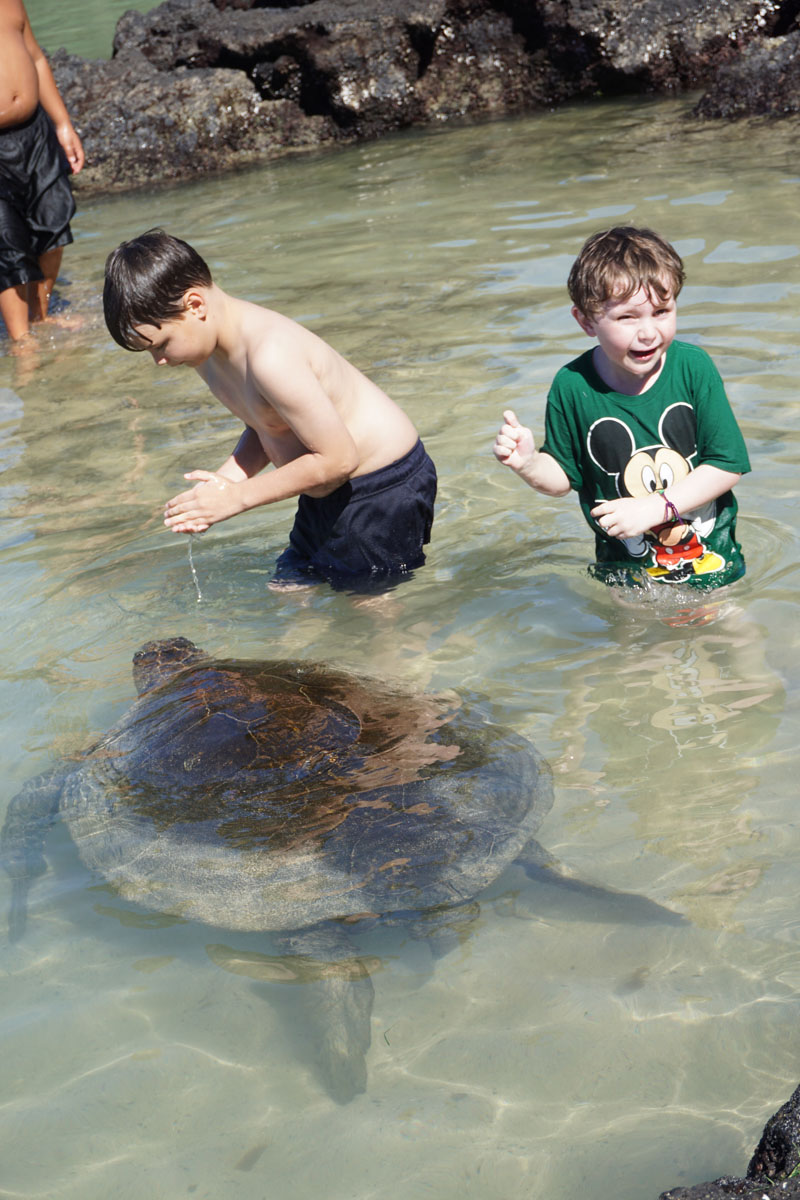 Pure joy at the thought of swimming with turtles!

Personal Safety and Respect for the Hawaiian Sea Turtles

Hawaii is one of the best places to swim with sea turtles in the world. This is in part due the the fact that Hawaiian green sea turtles are respected by the Hawaiian people and protected by both state and federal laws.  Please note take of all of the following guidelines for your own personal safety and the safety of the honu.

My friend Mary who lives in Hawaii has a couple of informative posts on sea turtles in Hawaii that you might like to read.