0
14
This post may contain compensated links. Please refer to my disclaimer here for more information.

We’re not loving Bangkok. Lee and Reuben in particular. It’s funny because it’s a city I loved coming to before I had a family. I even fancied living here for a while. Things just aren’t going right all the time and I feel like, because it was my idea to come here and I planned the whole trip, Lee is blaming me when we have a hard time. We’re arguing a lot and are finding it difficult making small decisions.

Because I don’t want to seem like an overly negative person (I’m really not), I’m going to start out by sharing the things that HAVE gone right. And then I’m going to whine…

I got a great haircut and colour for only 1500B, only NZ$60. Something that regularly costs me NZ$240 at home. (Yes, I know that seems disgustingly expensive but that’s what it takes to keep me this blonde!)

We had a couple of good trips to MBK mall. Reuben is super happy with his Elmo t-shirt and Sesame Street box of tissues. We’ve had three good meals in the food court – it’s fun paying with coupons, picking and choosing from all the different vendors.

I got my laptop screen fixed. Finally. It’s been broken for over a year, since the February 2011 earthquake. I had a quote in NZ to fix it for almost NZ$1000 so decided just to “make do” by plugging it into a monitor. We found a few repair places at Panthip Plaza and went with the one who gave the best quote. 3000B and only 30 minutes later it was fixed. That’s about ten times less than in NZ!!

It’s been easy to get Reuben to sleep even though we’re all in the same room. We were a bit worried about how this was going to work. He’s so tired by the end of the day he’s asleep the minute his head hits the pillow. Generally, he’s not waking up as early as he was in Australia because the sun rises that little bit later. 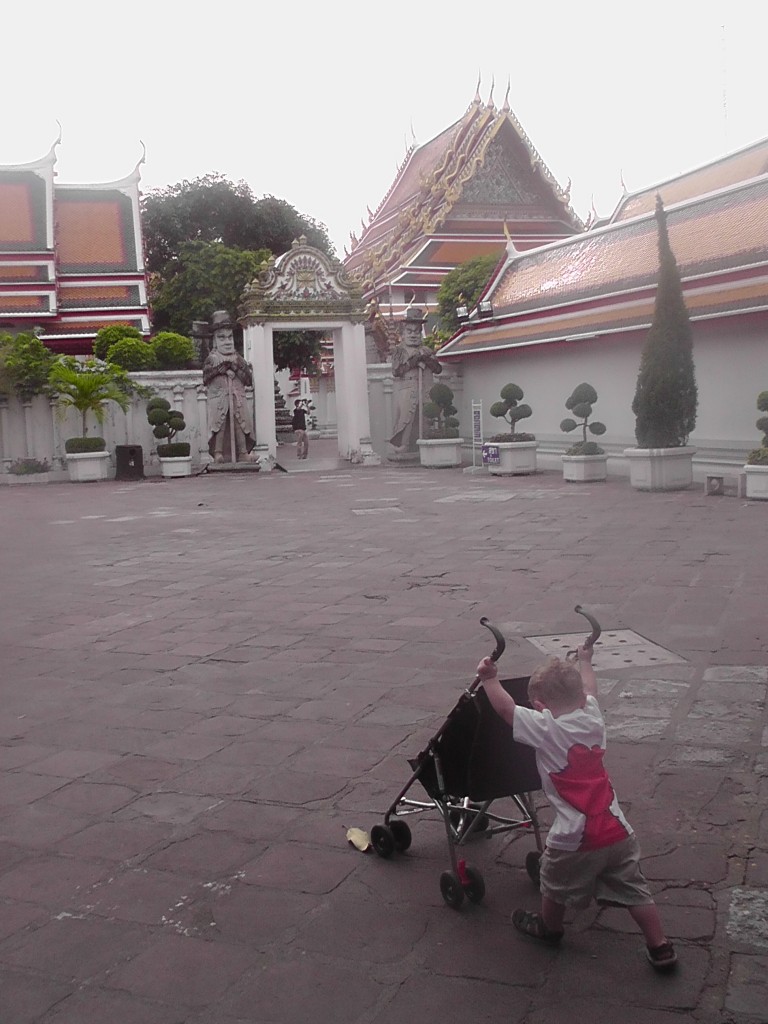 Our travel stroller is working well. Best A$24 we ever spent! It’s so much easier to fold up. I can carry it in one hand. Reuben thinks it’s a toy and is completely amused pushing it around a restuarant while we wait for our food or through the courtyard of a temple. 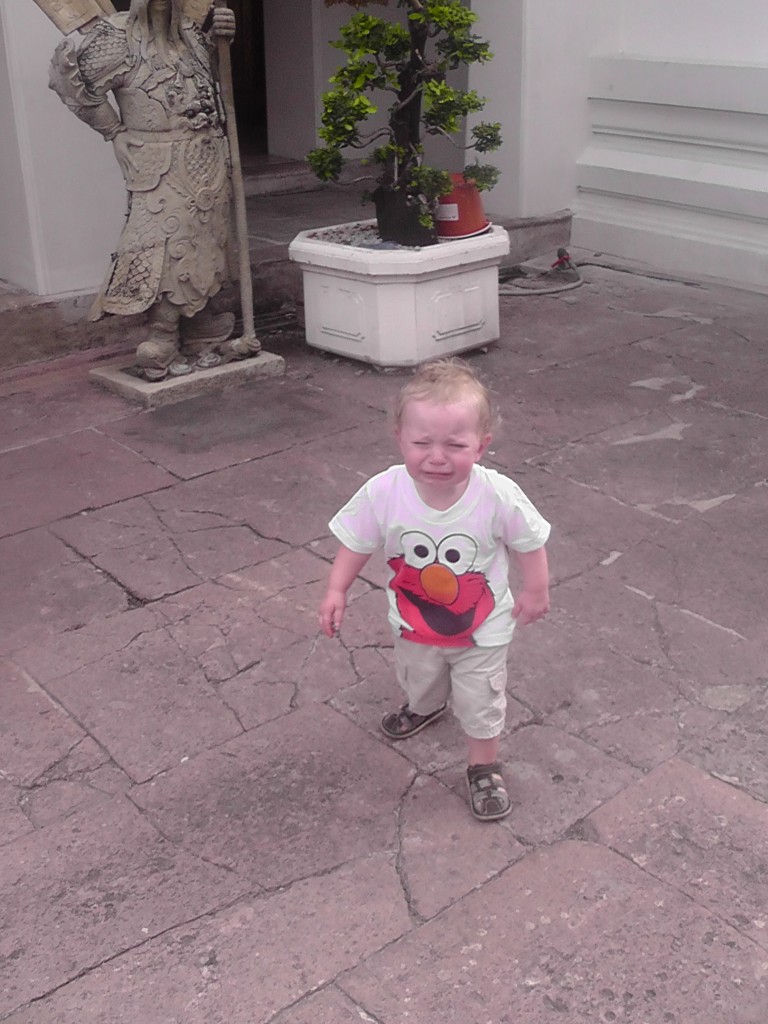 Reuben’s behaviour has been atrocious. He has been having tantrum after tantrum every single day. At first we thought he was tired, hungry or had eaten some MSG or food colouring. We’ve been controlling all those factors though and he still seems to be turning into a red, screaming ball of fury at the drop of a hat. The tantrums all seem to be related to us making him do something or stop doing something. Maybe he’s just protesting against change. Whatever it is, it’s wearing us both down.

We’ve been spending a lot more money than we’d anticipated. Sure, we needed to buy a few things when we first arrived and spend money on vaccinations. I don’t even feel like we’re being widly extravagent but when we total up our spend at the end of each day we’re always shocked at how much baht we’ve burnt through. 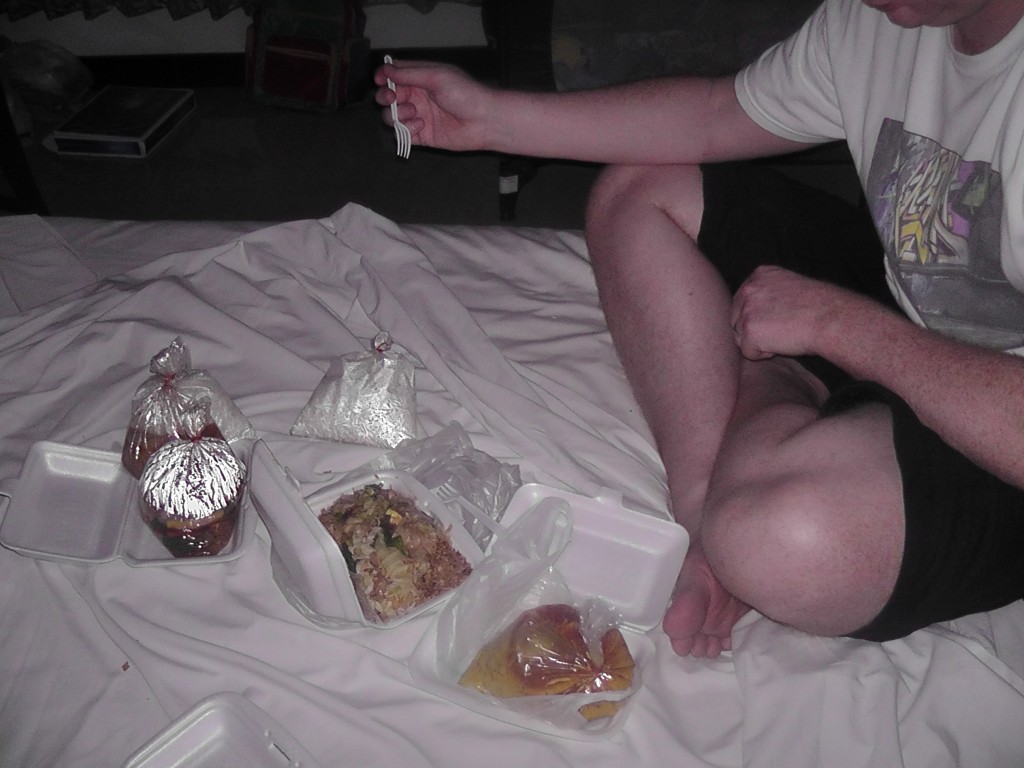 We’re hardly doing anything, or so it seems. I had a huge list of activities to do and sights to see but we’ve barely managed to do little more than walk around MBK and Soi Rambuttri. There have been no visits to the zoo, aquarium, indoor playgrounds, parks, temples and markets. It’s just to damn hot to do anything more than sit in an air-conditioned mall or around the pool. Some nights Reuben has been so naughty that we’ve had to put him to bed and eat dinner in the dark, in our room.

Lee and I needed to get a few of our vaccinations up-to-date. I’d read on With Two Kids In Tow about getting vaccinations in Bangkok and booked into the Thai Travel Clinic at the Institute for Tropical Diseases. Despite having the address written down in the English and the name of the clinic written down in Thai, it took two taxis, a trip to a university and the wrong hospital before we finally made it to our appointment. The appointment took ages and we were left waiting for a long time to see the doctor – probably due to the fact we were so late.

Our second trip to the same hospital a few days later didn’t go much better. After our appointment, we spent 45 minutes walking around in 40 degree heat trying to find a taxi. Eventually we walked to Victory Monument and found a tuk-tuk. We didn’t enjoy the tuk-tuk ride at all – too much pollution and heat.

We had a confrontation with a taxi driver that almost turned into physical violence, directed towards Lee while he was holding Reuben in his arms. This was the straw that broke the camels back. After this we were done with Bangkok.

So what seems to be the problem?

I’m not excited at the prospect of returning to Bangkok later in our trip. Not at all. On previous trips as a single girl I loved it here – shopping, massages, movies, drinking and meeting interesting people from around the world. None of that really seems to fit with family travel. Sure we can shop or see a movie but it’s not much fun with a screaming toddler. There’s no sitting out on the street drinking cheap cocktails and chatting the night away anymore either. In fact, I don’t think we talked to any other tourists the whole time we were there. While there were one or two families with children staying at our guesthouse, we haven’t come across any friendly travelling families. I guess I’m a little disappointed. I’ve been so busy managing Lee’s expectations that I forgot to manage my own. I expected him not to like it and prepared for it. I didn’t do this for myself.

Maybe things will be better when we return for a few more days later in the trip. Here’s hoping Bangkok’s not such a bitch the second time around.