Now is a great time for Australians and Kiwis to travel to the United States.  The Australian and New Zealand dollars are both at record highs against the Greenback so accommodation, eating out and shopping are a lot more reasonable than they were a few years ago.  Domestic tourism is down which means there are great deals to be had on hotels and rental apartments.  We spent almost three months in the US at the end of 2011 and found it a very easy place to travel with a child.  In general, Americans are very open and friendly and we found everyone incredibly enamored with our toddler.

Getting to the US from Australia or New Zealand

Flights from New Zealand and Australia into Los Angeles take anywhere from 11 to 13 hours, a long time to spend in a plane if you’re a toddler who loves to run around!  From Australia there are a few options from each of the major cities (Virgin, United and Qantas) but we found that all the flights depart mid- to late-morning and travelled through the day.  The thought of spending 13 hours stuck on a plane with Reuben thrashing and screaming was unbearable, particularly as he had just dropped down to one daytime nap.  A daytime flight might be OK for older kids who can amuse themselves with books, games or watching movies but for us it just wasn’t an option we would consider no matter how much cheaper the fare was.  Return fares from Brisbane to LAX  per adult were around the A$1200 mark on Virgin & Unites and around A$1700 on Qantas. 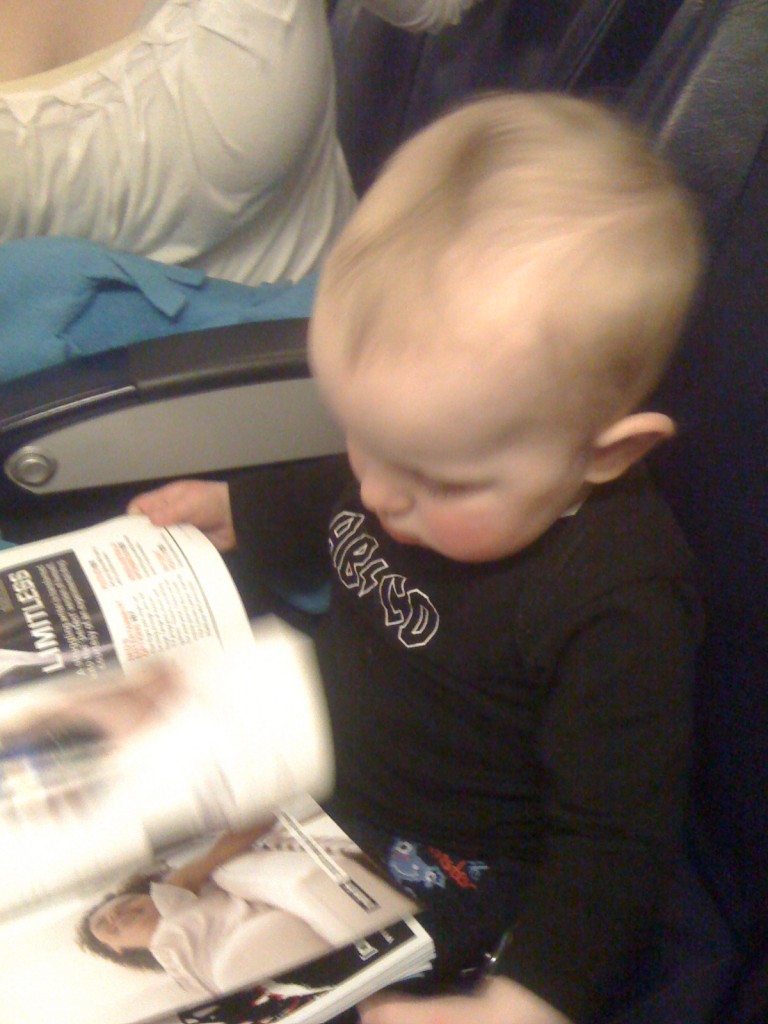 We elected to take the Air New Zealand flight which travels via Auckland with the bulk of the flight overnight. This worked well.  We left Brisbane mid-afternoon and got to Auckland mid-evening (there’s a three hour time difference).  We had a couple of hours in the airport and we let the little man run loose and burn off as much energy as possible.  Our flight left at 10pm (which was 7pm Brisbane time) just in time for him to have a bottle and get to sleep for the night.  We booked the new SkyCouch service which made the flight very comfortable – I’ve reviewed the SkyCouch in a separate post.  Reuben woke up in time for breakfast, a few hours before we landed.  All up our flights cost just under A$4200 which included the A$1100 SkyCouch upgrade.

Eating in the US with Kids

Restaurants, especially the big chains like PF Changs and Cheesecake Factory, are particularly child-friendly.  Every restaurant we went to had a highchair we could use and usually provided crayons and colouring sheets for entertainment.  Kids menus were really cheap, literally just a few dollars per item, and the options were very good.  Our toddler loved the chicken fried rice from PF Changs and the quesadilla, rice and beans from Chipotle.  Restaurants were also happy to provide simple meals off the menu such as a scrambled egg.  We always ask for Reuben’s meal to come out as soon as it’s ready so we can get him feed before our food comes out. 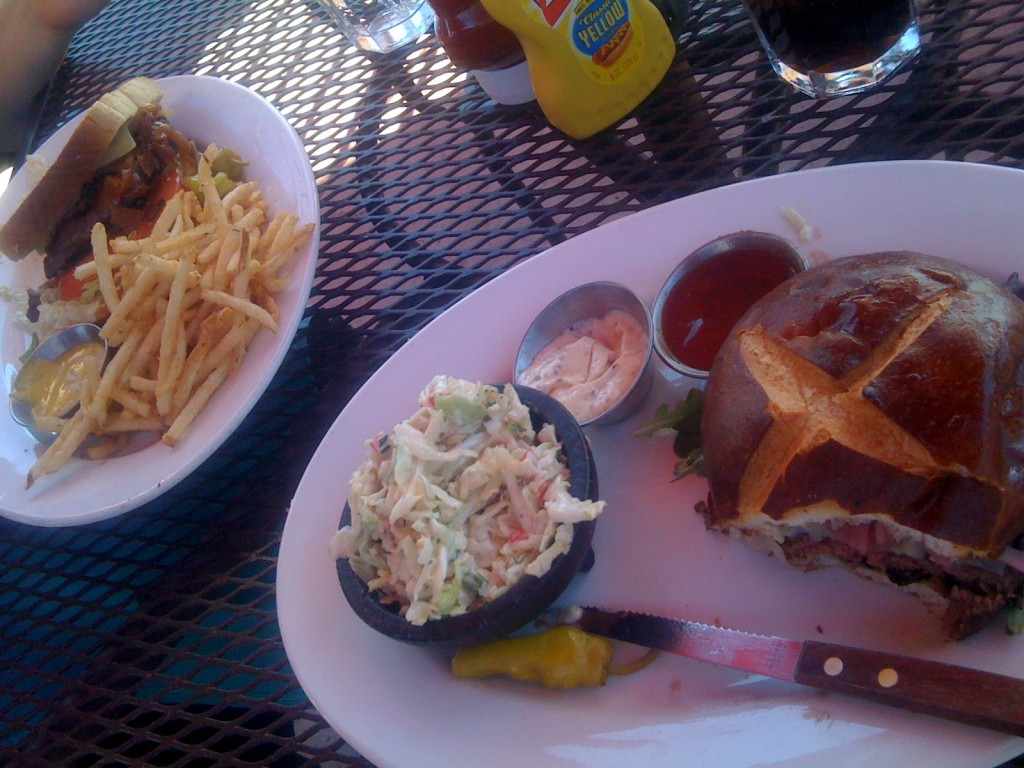 We bought groceries a few times online and had them delivered (try vons.com and albertsons.com, first delivery is usually free) but for everyday items like cereal, milk and snacks we used the CVS drugstore downstairs in the building which was very convenient but dangerous for running down for those naughty late night snacks!  We cooked a few meals but eating out is so cheap in the US that most often we got takeaways and bought them back to the apartment to eat in peace while Reuben played – much easier than trying to get him to sit still in a restaurant.  Beware when you order groceries online – we found lots of additives and preservatives snuck their way into even basic items such as yoghurt, bagels and muffins.  Where we could, we preferred to get items from Wholefoods – they’re more expensive but better quality.

On the road, most hotel rooms had a mini-fridge and coffee maker.  Stock up on some yoghurt and milk for cereal.  It’s a lot easier to get your kids fed before heading out for the day, rather than driving or walking around searching for something they might eat for breakfast.  Only one place we stayed in had kitchen facilities – probably because we opted for more expensive hotels.

If your baby/toddler is formula-fed you’re in for some nasty surprises.  We found the quality of the formula found in supermarkets and drugstores very poor compared to what we have available in NZ and Australia.  A lot of foods in the US are loaded with high fructose corn syrup and we were shocked to find it was the main ingredient in a few different brands of formula.  We found it hard to find toddler formula, most was for babies under 12 months.  We decided to Reuben onto cows milk at this point.

Accommodation in the US with Kids

For the bulk of our stay we rented a gorgeous apartment in Las Vegas through vrbo.com.  You can check it out here: http://www.vrbo.com/136477 .  We negotiated a 6-week lease for US$3500 (even though the owner specifies a three month minimum on the site) with cleaning, power & water additional (a few hundred dollars).  The apartment was a great option for us as we had a spare bedroom for Grandma to join us for the first ten days allowing us to get out and about sans baby.  If you’re staying in an apartment you’ll need to bring your own travel cot (crib), unlike hotels they very rarely supply one for you. 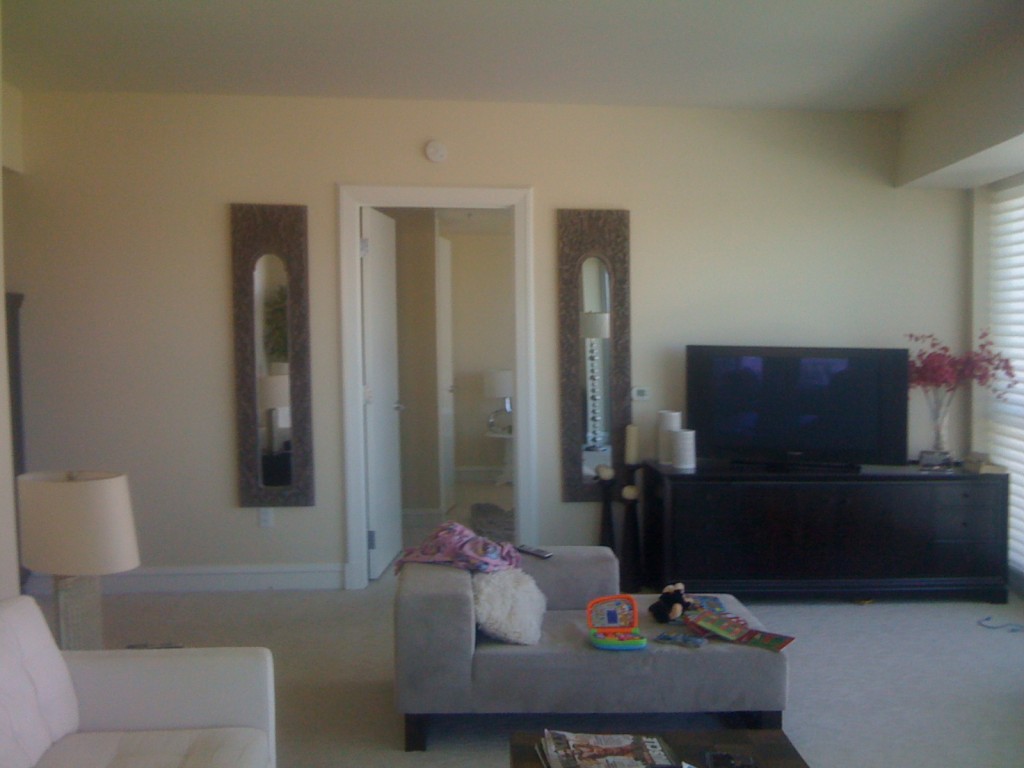 Our Apartment in Las Vegas

For the rest of our trip we stayed in 4-star hotels, paying anywhere between US$60 and US$145 a night.  The only place we paid close to full price for was at the Grand Canyon where it is notoriously difficult to get discount rooms.  We used a combination of hotel booking sites (booking.com, goingtovegas.com and priceline.com) and sites like Groupon and Living Social to get specials when they came up for cities we were interested in.  The best deal we got was our stay at The Beverly Hilton using Priceline where we paid US$135 for a room that normally costs US$325 – the woman at check-in couldn’t believe we got the room for such an amazing price – she’d never seen it that cheap!  For more detail on how we got these deals, have a look at my post on How to Get Cheap Accommodation in the US.