0
5
This post may contain compensated links. Please refer to my disclaimer here for more information.

We sadly just finished up our time in the Southern Gulf islands. We spent almost three weeks in total between Koh Samui and Koh Phangan. Despite Reuben’s meltdowns, we really enjoyed these two islands. Both offer something completely different to visitors. More to come on that in a later post.

We’re now travelling down through the South of Thailand headed for Penang in Malaysia.

I had the genius idea that we should explore the beaches along the Thai mainland, just across from Koh Samui. They’re good in theory. A nice long golden stretch of beach, the sand a bit coarser than on Samui, sharing the same turquoise blue water as it’s neighbouring islands. There are a few resorts along the coast around Khanom and Sichon frequented by Thai tourists at weekends. I thought I was onto something really special. 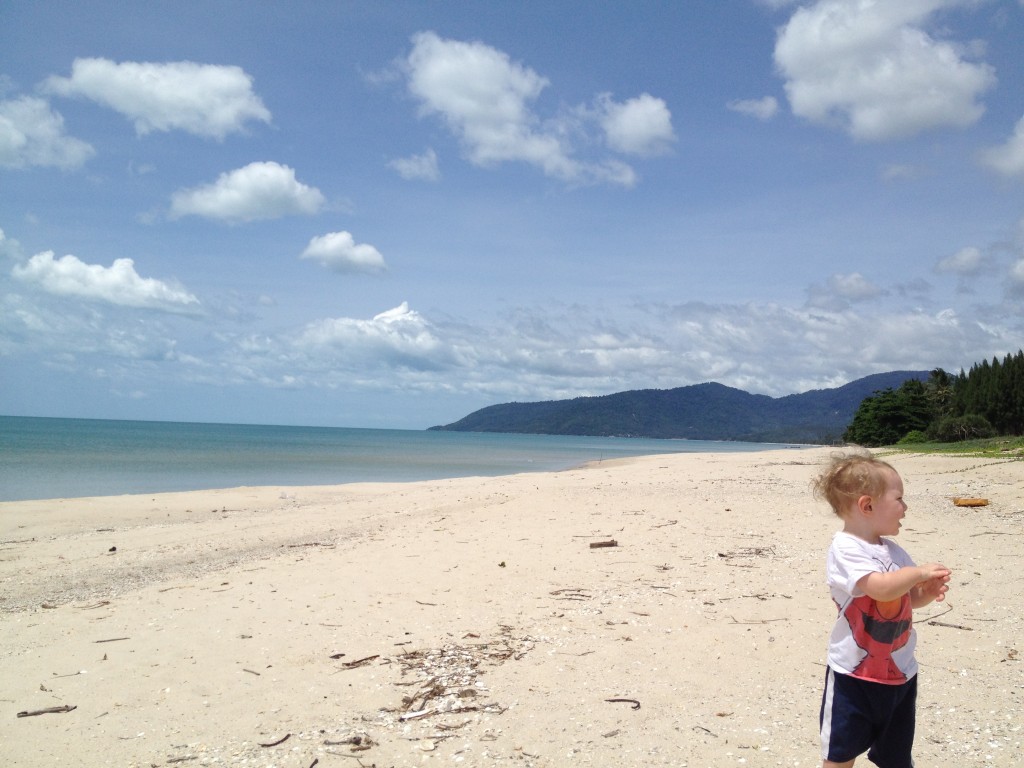 What we got was… nothing special. Everything is really spread out – the resorts, restaurants and towns aren’t close together. Nowhere to even by milk or water. You can’t walk around. There aren’t even any taxis or songthaew for transport. To get 30kms from Don Sak pier, where the ferry from Samui arrives, we had to rent a whole minibus for 700B – we bargained long and hard to get it this low. The sharks operating out of the ferry terminal won’t budge or help. We tried to get a minibus to Nakhon to drop us down the road but the taxi mafia intervened and made it impossible.

We arrived at a resort, Alongkot, we’d booked through Agoda. Again, good in theory. In reality we arrived at a complete dump – a musty room filled with bugs, a dead frog in the shower, blood-stained towels, a garbage bag in the pool, a pack of very brazen stray dogs and garbage and dirty nappies in the grounds of the resort. Needless to say, we didn’t stick around long. We managed to wrangle some of our money back from the management and convince them to drive us to a resort down the road. 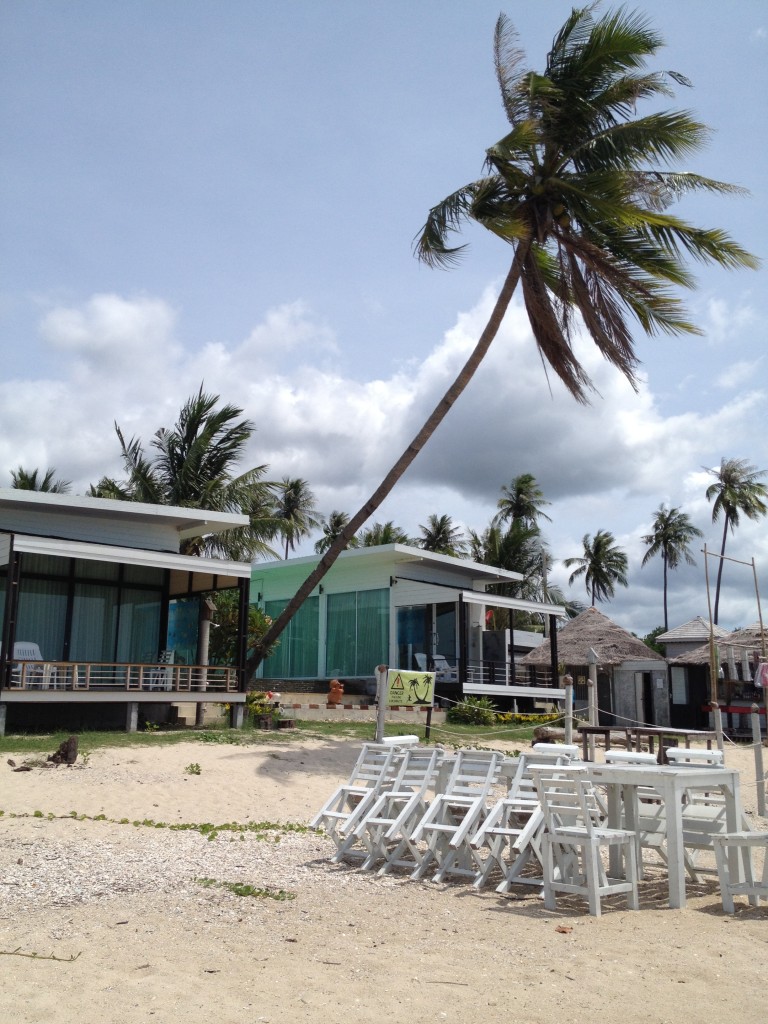 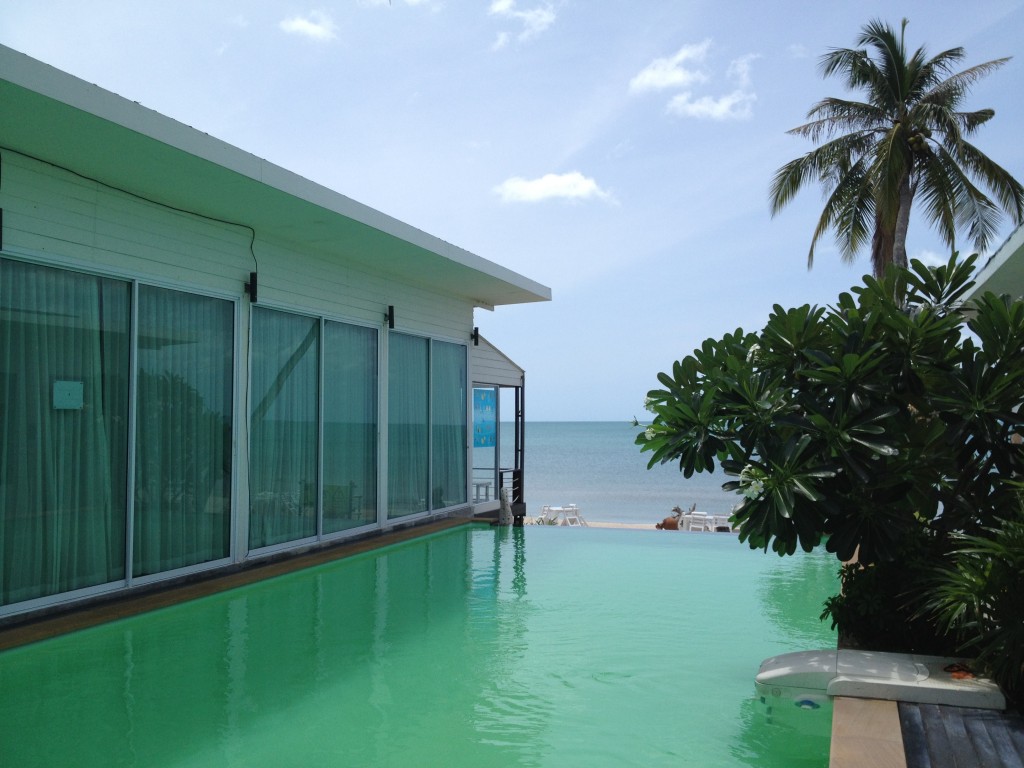 Step straight from the room into the pool

We stayed instead at a nice, newly built spot called Baan Civilize. We were the only people there and we had a nice room that stepped directly out onto the pool. The resort was good on the surface but on closer inspection the construction of our room and deck was very shoddy (loose tiles, rotten boards), there were ants everywhere and the pool stung our eyes when we swam in it.

After a few hours here we realised there was nothing to do and nowhere to go so planned to leave the following day.

It’s easy to get from Khanom down to Nahkon Si Thammarat, the next big town in the region, provided you can get a lift from the resort area into Khanom town where the minibuses run. 80B and an hour and a half later we made it down to Nakhon. 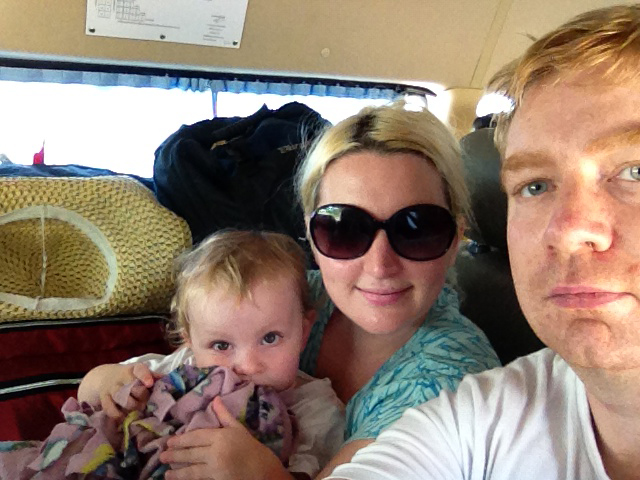 Squished Into a Minivan

It makes you appreciate the places that are geared up for tourism a little more. There’s a big difference between a quiet beach on Koh Phangan and a dead beach in Khanom. I can see why people would want to come here though. If you were travelling solo by motorbike and wanted to kill a few days laying on a quiet beach reading a book then it wouldn’t be a bad place. It certainly holds nothing for families with young or old children.

Back to city living. It feels really good to be in a hotel again. After so many weeks in little guesthouse and bunaglows we are enjoying staying somewhere a bit posh. We’re up on the 10th floor of the only high-rise building in town. The view is great and it’s nice not to be at ant-level for a few nights. This is provincial Thailand after all so it’s not the Four Seasons but still, you won’t get a 4-star hotel in Bangkok for only 1400B a night (around US$40). 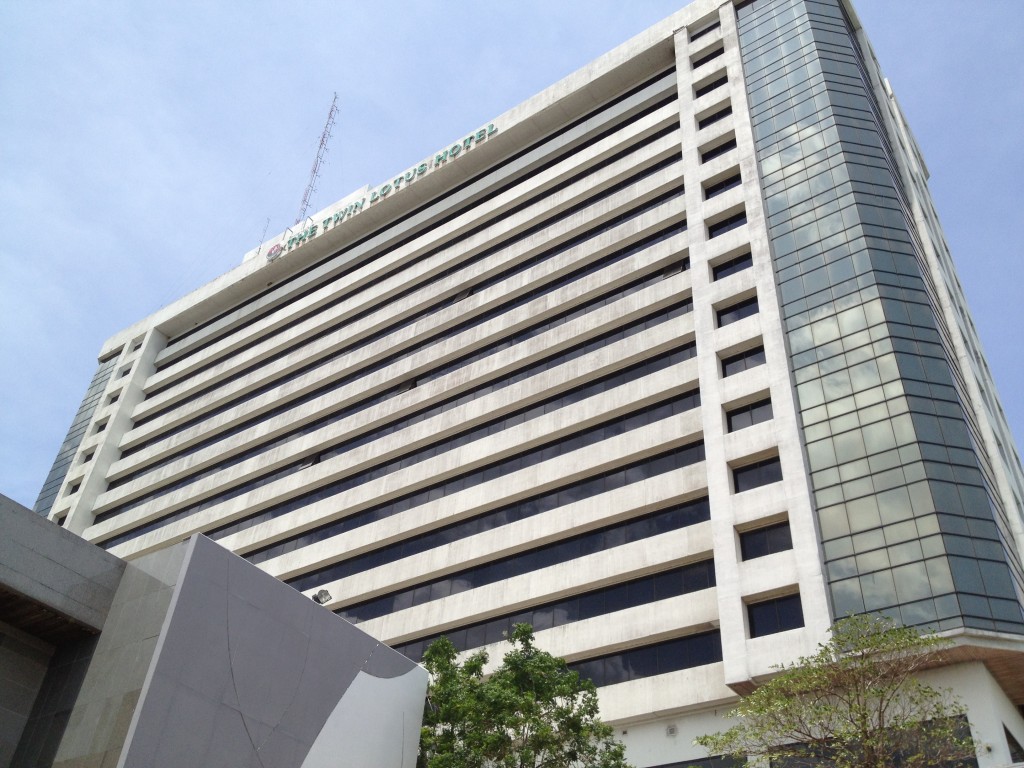 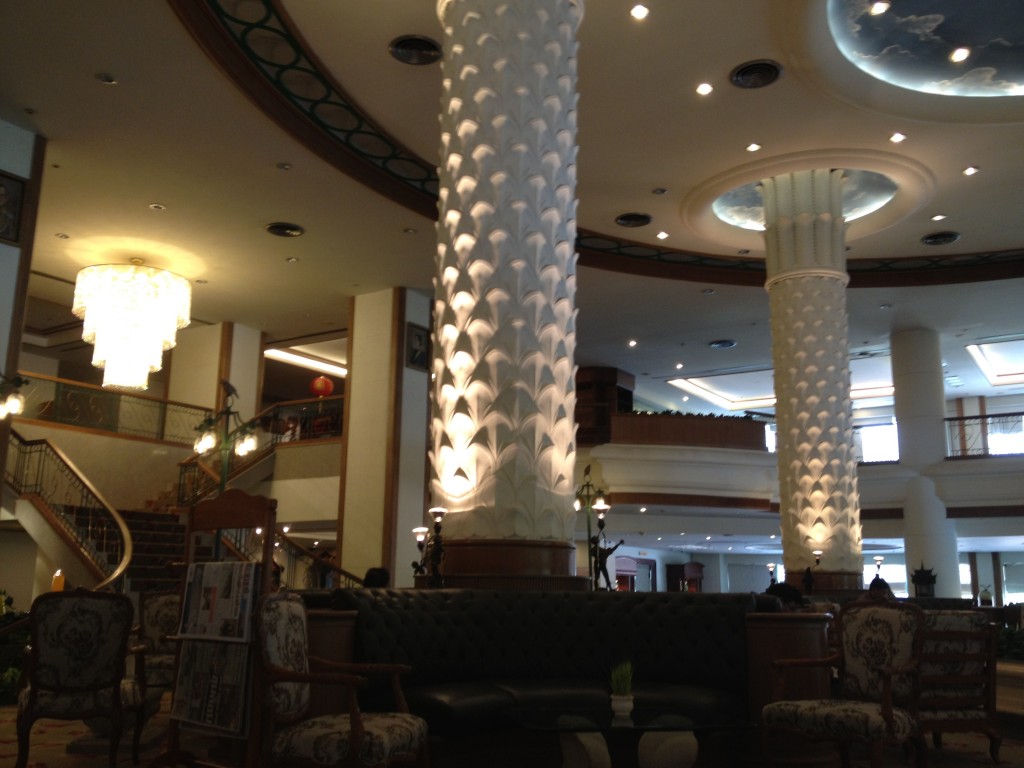 It doesn’t seem like Nakhon has much going for it. Rather, it’s just a typical Thai town with people going about their daily business. For us, it makes a good transit point on our journey South to Malaysia. We’re been trying to keep our journey times to no more than three or four hours a day. This seems like the maximum amount of sanity we can gain from Reuben provided he has a nap at some point on the trip. It’s four hours on the train to Hat Yai from Nakhon which should be manageable given the extra level of excitement trains provide for a little boy!

The Joy That is Tesco Lotus

We did some shopping at the Tesco Lotus across the street this afternoon and Reuben was quite the little star. There aren’t any other falang (foreigners, gringos, what-have-you) around and certainly not any grubby-faced pantless baby boys. I actually think they made an announement over the loud speaker letting other shoppers know there was a “falang…. baby….” in the store! Either that or they were announcing a special on some kind of baby products. Who knows? My Thai sucks. 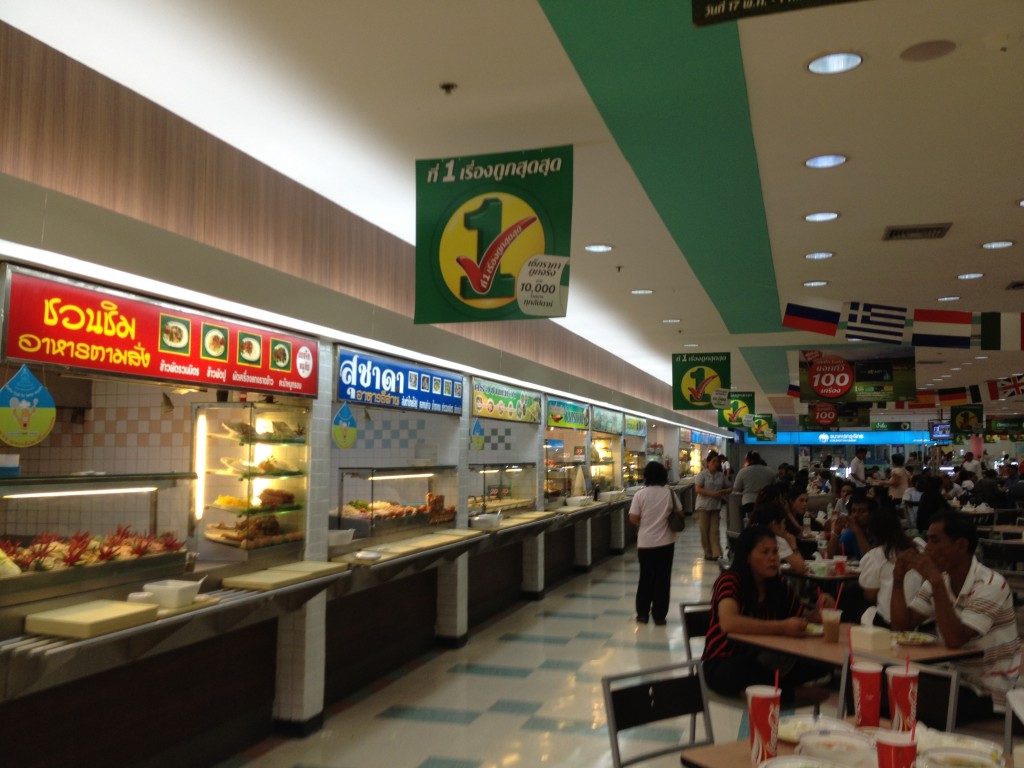 For those not familiar with it, Tesco Lotus is actually a great place to go if you’re in Thailand. It’s a big supermarket chain so excellent for stocking up on nappies, milk and snacks and well as cheap clothes and shoes. There’s usually a cheap as chips food court offering cleaned-up versions of street food stalls. 40B chicken and rice, anyone? 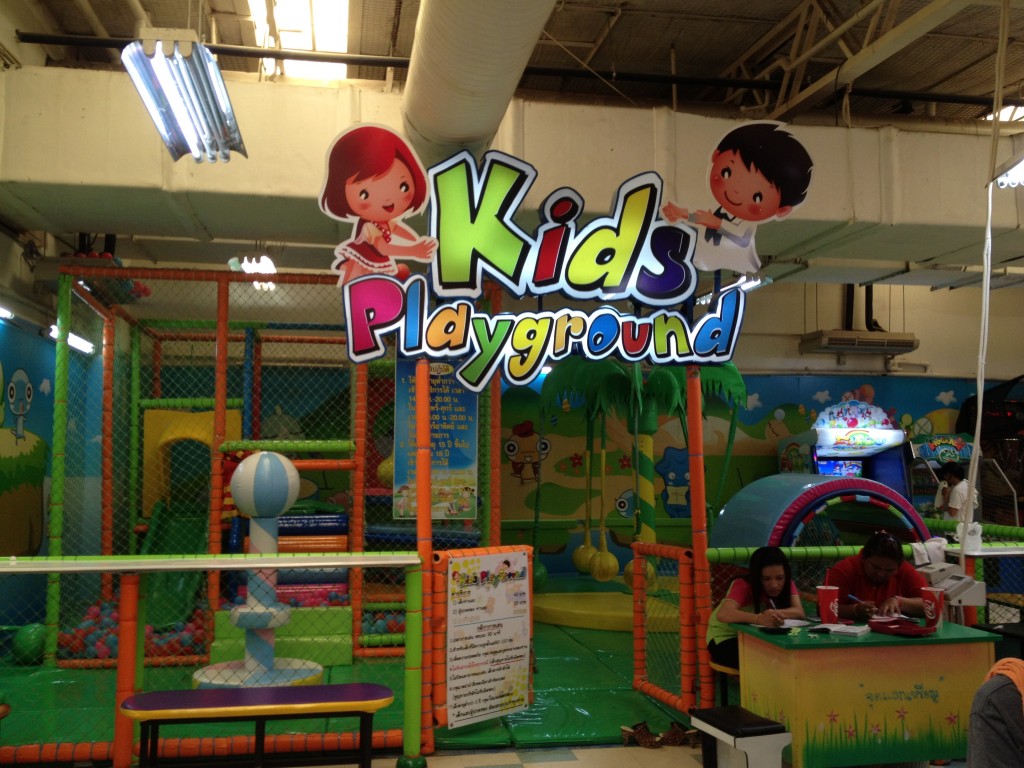 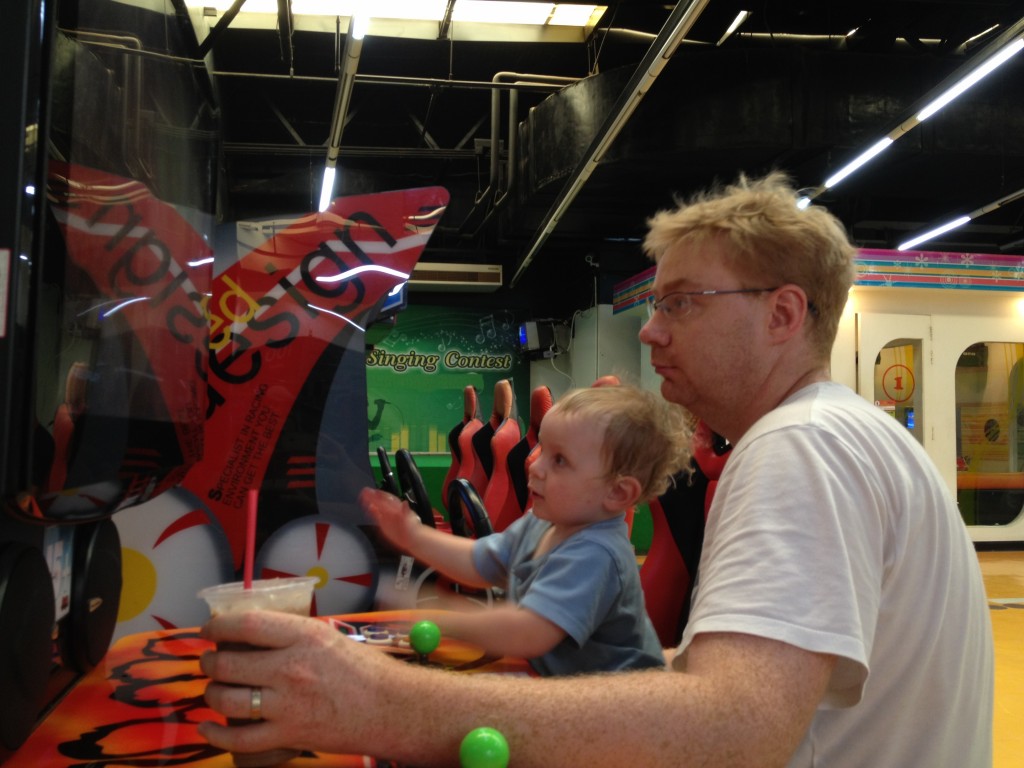 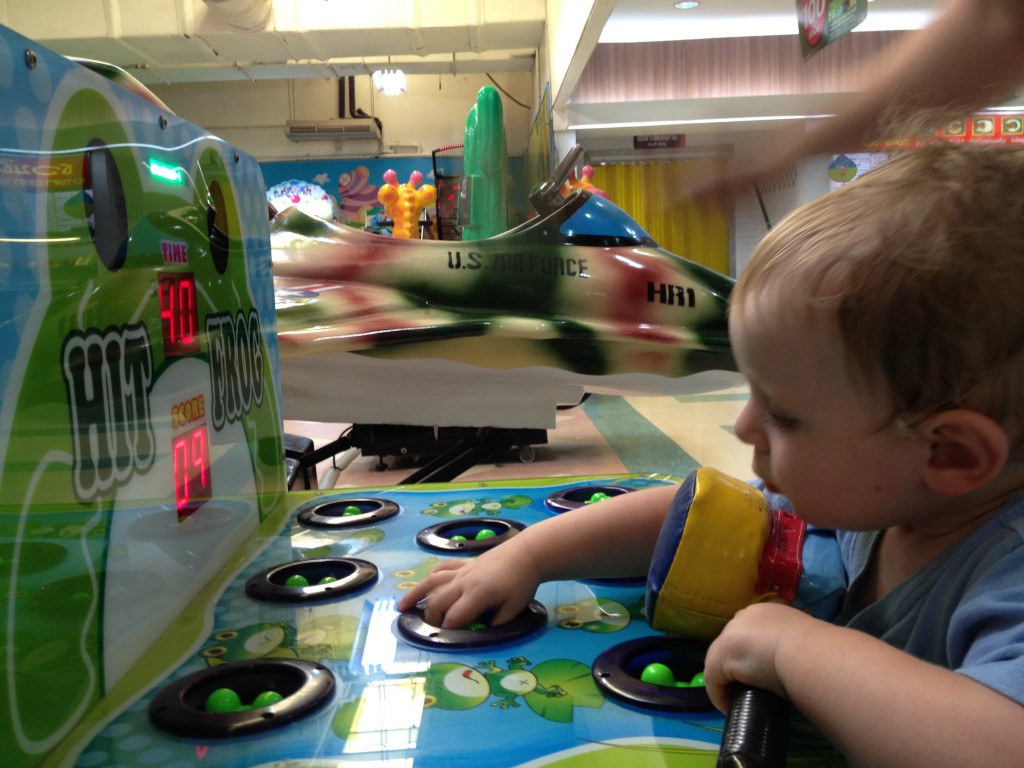 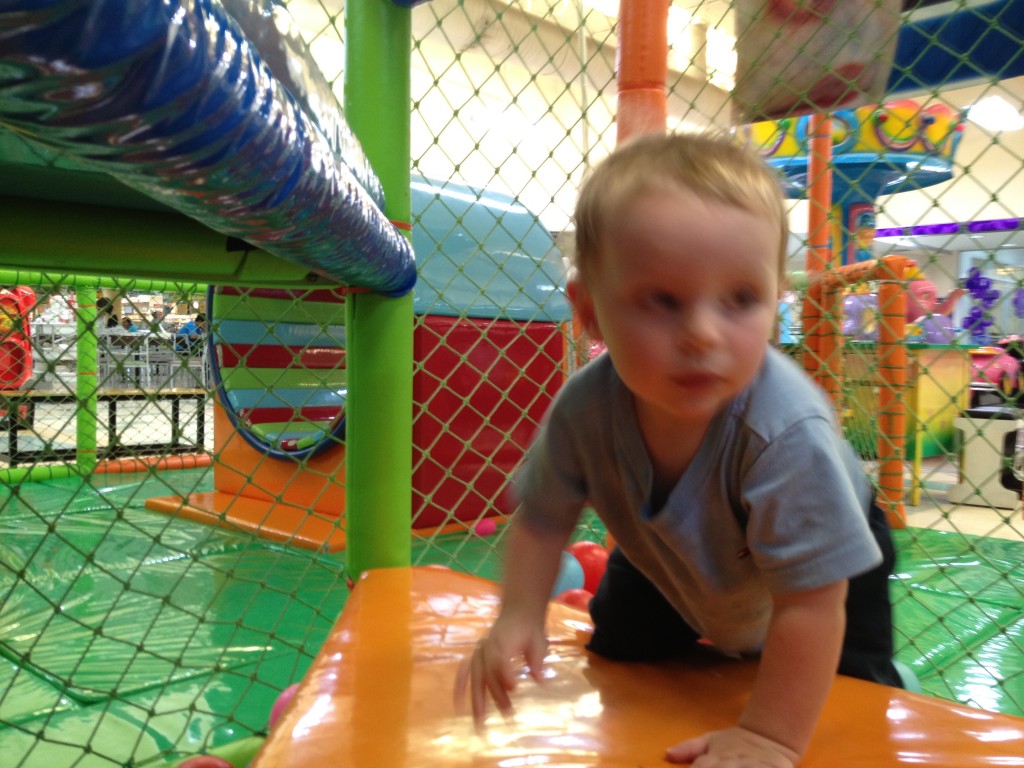 Indoor Playground - A bargain at 40B!

It’s kid-friendly too. They have kiddie shopping carts shaped like cars, video games, mechanical rides and indoor playgrounds. Playgrounds, of the outdoor variety, are something we have sorely missed since leaving Australia. Indoor playgrounds, with ball pits and padded climbing frames, make a good substitute.

Now, we’re not the kind of family that skulks around in shopping malls and supermarkets at home… but there’s something to be said for finding everything you need and having a bit of fun under one, air-conditioned roof.

Tomorrow… off to Hat Yai!