0
3
This post may contain compensated links. Please refer to my disclaimer here for more information.

What’s the best place in New Zealand? As New Zealand is my home country, this is a question I often get asked by other travellers when I’m out on the road myself. So many people want to visit New Zealand – seeing it as a magical, untouched paradise down in the corner of the world. If you asked me I’d say that the West Coast of the South Island was the most scenic and interesting part of the country but I may be biased as that’s where I grew up. I haven’t travelled the length and breadth of New Zealand so I can’t definitively say… so I polled a great group of travel bloggers  and asked them;

And these were their answers… 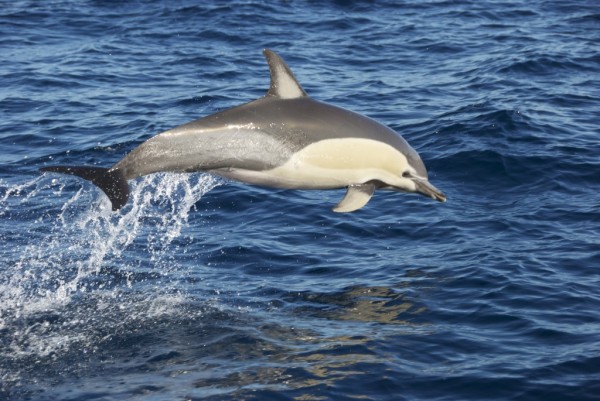 A view in the Northlands.
Source: Michael at GoSeeWrite

“I really enjoyed Northland, which is the area just north of Auckland. Auckland is such a typical huge, boring city (in my opinion) and it’s a relief that there is such a small-town oasis only an hour or so north of there. Plus, the scuba diving up there is great also.” – Michael at GoSeeWrite

“I really adore all of New Zealand, but I have to say I’m an Otago girl at heart. Otago is in a region in the south of the South Island, and home to some excellent Pinot Noir, as well as the Remarkables, which are great for hiking or skiing, and towns like Queenstown, Wanaka and Arrowtown, which I love. Queenstown is the adventure capital of New Zealand, where you can do anything from rafting to bungy jumping. Wanaka is slightly smaller but equally located beside a beautiful lake, and has some great skydiving and hiking, while Arrowtown is perhaps a little more laid back with its gold mining history and quaint setting.” – Christina at SandalRoad

“Wanaka – the laid back vibe that comes from knowing you live in a cool mountain town. The lake is epic in the summer, the mountains epic in the winter and superb hikes in every direction.” – Michael at NomadsOnTheRoad 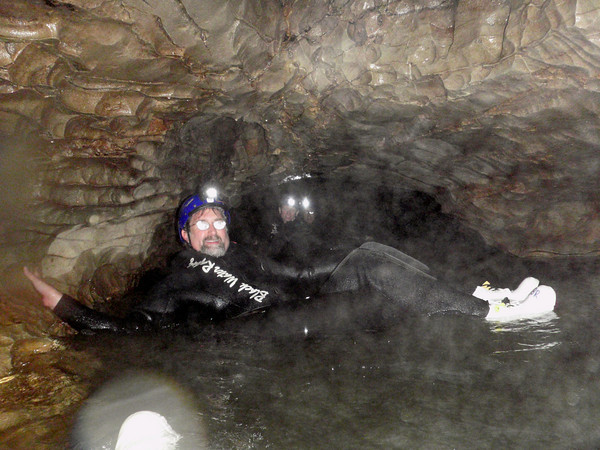 “The best experience was Blackwater Rafting in the Waitomo Caves. Getting in a wetsuit and tubing down an underground river is not a common experience.” – Chris at Amatuer Traveler 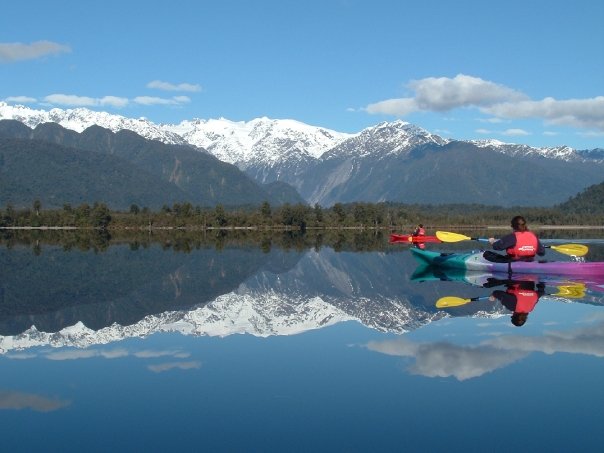 “I love Nelson‘s point and Golden Bay. It’s at the very top of the South Island. You can kayak around and in between islands. The area is not accessible by any other mode of transport and it’s just amazing. You kayak between islands, stopping off where you like and meet other travellers doing the same. Engage in a game of beach cricket, eat lunch and have some beers (which you’ve of course brought yourself) before heading off to another place. The sunsets were amazing and it’s the one place in NZ that I really remember very well.” – Simon at LADventurers

“Best? Oh dear, this is going to be a tough one. I really enjoyed the south island immensely – the glaciers on the West Coast & the boat trip out into Milford Sound being particular highlights. I guess Fiordland and Westland rate pretty highly from my year out there, but really, the whole country is just one long pile of awesome ;)” – Laurence at FindingTheUniverse 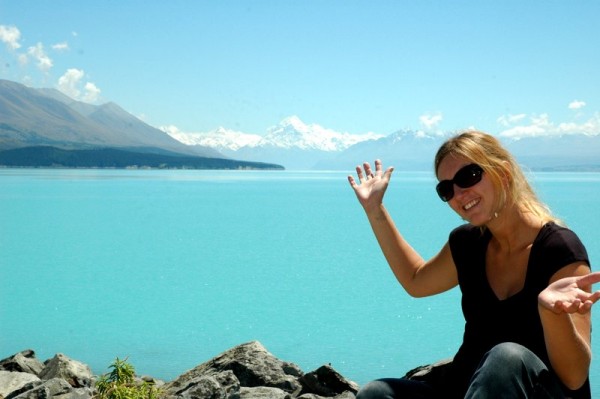 Behind me is Lake Tekapo
Source: Nienke of TravelTester

“The one place that I loved about New Zealand was Lake Tekapo on the South Island. It simply took my breath away, never seen anything like it. Unfortunately I booked myself a bus tour (big mistake) and had the driver honking at me for being late after only 5 minutes! I could’ve easily spend my whole stay staring at the beauty of this lake.” – Nienke at TheTravelTester

“Best place we visited: Christchurch. We were there 9 months after the devastating earthquake. Downtown was still fenced off and being demolished. Yet the resiliency and optimism of the people who lost everything were like no other place on our around-the-world journey. It made us reflect on the meaninglessness of possessions and look at our own life in a whole new way.” – Larissa at ChangesInLongtitude 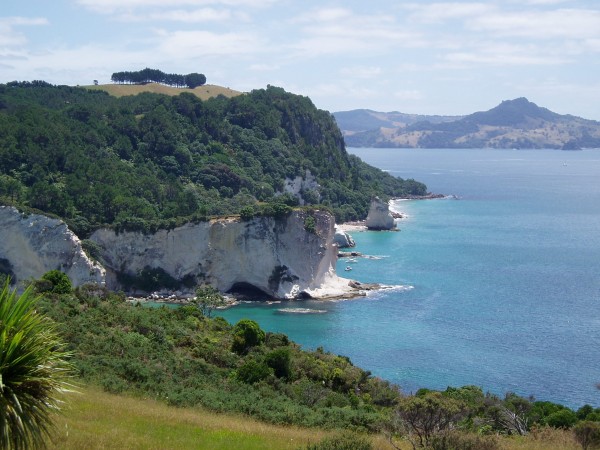 “If I had to pick one place I’d choose Waiheke Island where I lived for eight years. It has stunning beaches, some lovely little bush walks and the island is stuffed with award-winning wineries and vineyard restaurants. Sitting at the Mud Brick Restaurant with a wine in hand watching the sunset over the Hauraki Gulf with Auckland just across the water you feel like you’ve won the lotto.” – Annabel at GetInTheHotSpot

“My top picks are Queenstown/Central Otago region: good in every season, and with some of the most reliable weather in the country. Huge range of things to do from scaring yourself to death doing adrenalin sports, to just chilling in some of the most accessible and beautiful scenery Wellington on a good day is spectacularly lovely, and on a bad day (of which there are plenty) Te Papa (the National museum), and the coffee shops will keep you entertained.” -Elisabeth at LisTravelTips

“It’s a tough choice, because I’ve found one of NZ’s best kept secrets, the Far North, and it has completely stolen my heart. It’s not for everyone, being quite a distance away from everything else on less than fabulous quality roads. But it’s quite and quaint, simple and ruggedly beautiful. I also really love Milford Sound, because it is completely beautiful and unique rain or shine. I’ve been 3 times now, and it certainly has a magic about it. The anticipation of reaching such a remote destination gets me. The drive out is absolutely stunning, and there’s lots to see along the way. I’ve driven myself in, as well as flown over the Remarkables and have just been floored in awe of nature every time. I’ve done the standard cruise, as well as kayaked to Sterling Falls and back. I still need to get out to Doubtful Sound though.”– Kate at Canuckiwikate 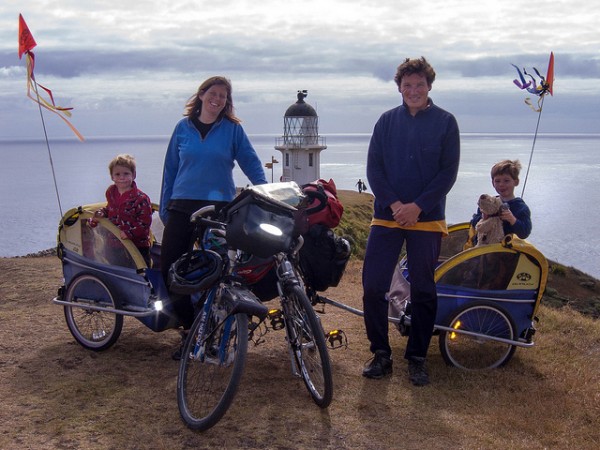 “We cycled from the southernmost tip to the northern most tip with two toddlers and saw so much it’s hard to pick a place. Between us we loved the two extremes. I loved the wilderness of South Island and riding the backroads into the madness of adventure capital Queenstown. Kirstie loved the solitude and spiritual vibe of 90 mile Beach and Cape Reinga, where the oceans meet and Maori spirits are said to depart for the afterlife. And the kids loved the sand duning on the Cape too.” – Stuart at FamilyAdvertureProject

“I especially loved Christchurch. It is of course damaged now after the big earthquake, but it has an ancient English-style feel to it, and I enjoyed one of the best Indian meals ever (extraordinary, very hot Southern Indian murgee madras chicken curry) at Little India. – Carole at TravelsWithCarole

“Having just spent eleven months travelling around Australia I thought perhaps I’d be road tripped out by the time I arrived here in Auckalnd. However my thirst for exploration grows with every page I read of my New Zealand travel guide. This country does scenic views like nowhere else on the planet and having seen a large proportion of them recently on the cinema screen I can confidently say I am bursting with excitement. I had thought that the canvas on which the popular movies were filmed may have been jazzed up for the viewing public however I am starting to realise that was not the case.” – Charli at Wanderlusters

Near Auckland you’ll also find Hamilton. Nadine from Le Long Weekend has a wonderful list of things to do in Hamilton with kids if you’re planning on visiting with family.

So… there you have it. Basically, the best place in New Zealand lies anywhere from the very tip of the country to the tail!

Have you been to New Zealand? What do you consider the best place to visit?