0
2
This post may contain compensated links. Please refer to my disclaimer here for more information.

After a week in Georgetown Penang, it was back to the beach bungalows for us for the final time on our two-month journey. This time we were going to the Perhentians Islands – a set of two islands off the east coast of Malaysia.

Getting to the Perhentians from Penang was easy. We hopped an early morning flight on Firefly Airline from Penang into Kota Bharu. The flight was under an hour on a propellor plane. Flying was well worth it. The flight cost us 400 RM, around NZ$160 or US$125 and saved us an awkwardly timed six hour bus ride. (If you’re interested in the bus it leaves Penang at 9pm arriving in Kota Bharu in the wee hours of the morning or 9am arriving too late in the afternoon to meet the last boat to the islands.)

We arranged a transfer from Kota Bharu airport to the pier at Kuala Besut an hour away. We’d never dream of this in Thailand because the price would be well over-inflated but we’ve found Malaysia a lot more honest. Prices quoted for taxis, even by more expensive hotels, are generally spot on the market price. There doesn’t seem to be the prevailing attitude of “Let’s rip-off the foreign tourists because, hey, they’ve got more money than we do!”. The minibus cost us 37 RM per person one way and the boat cost 70 RM per person return.

During the flight I started to have some major digestive discomfort. By the time we were in the minivan to the pier I was writhing in pain, sweaty and feeling very nauseous. About 45 minutes into the journey I had to ask the driver to stop on the roadside for fear I was going to… well, crap my pants.

Fortunately I didn’t but the remaining 15 minutes of the journey were bowel-clenchingly nervous. As soon as we reached the transfer office at the pier I bolted to the toilet as fast as I could. I arrived JUST in the nick of time and proceeded to lose what seemed to be the entire contents of my gut into the most unpleasant squat toilet. The thing with a squat toilet is you really get up close and personal with your, err, business. It was truly a nasty experience and one that continued for the rest of the day. I’m certain I shouldn’t have drunk a lukewarm milo from and Indian cafe the day before!

The one hour boat ride to Perhentian Besar went without incident, thankfully. We arrived to the most beautiful sight – the clearest, bluest, most coral-filled water we’d ever seen. Words cannot express it. Thankfully, I had my camera.

Have you ever seen water this clear? 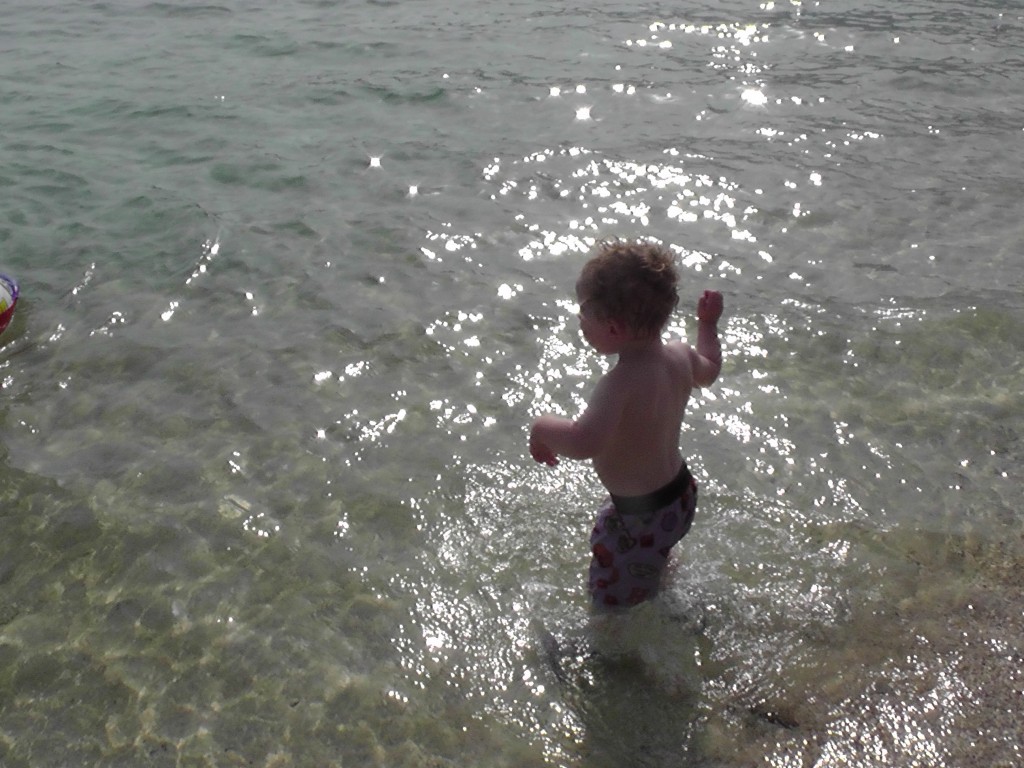 Taxi Boat Between the Perhentian Islands

So how did we spend our week in the Perhentians?

We took a lazy breakfast. Swam. Buried ourselves in the sand. Made friends with the many other families on our beach. Swam some more. Snorkelled. Watched all those Simpsons DVDs we bought in Thailand. 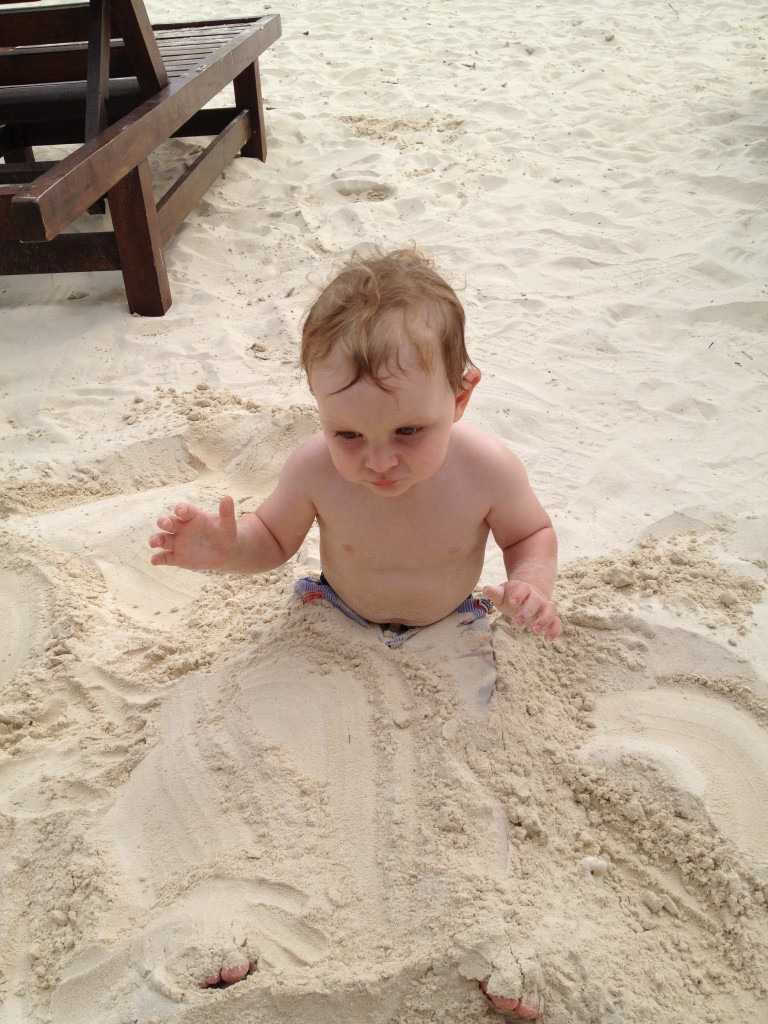 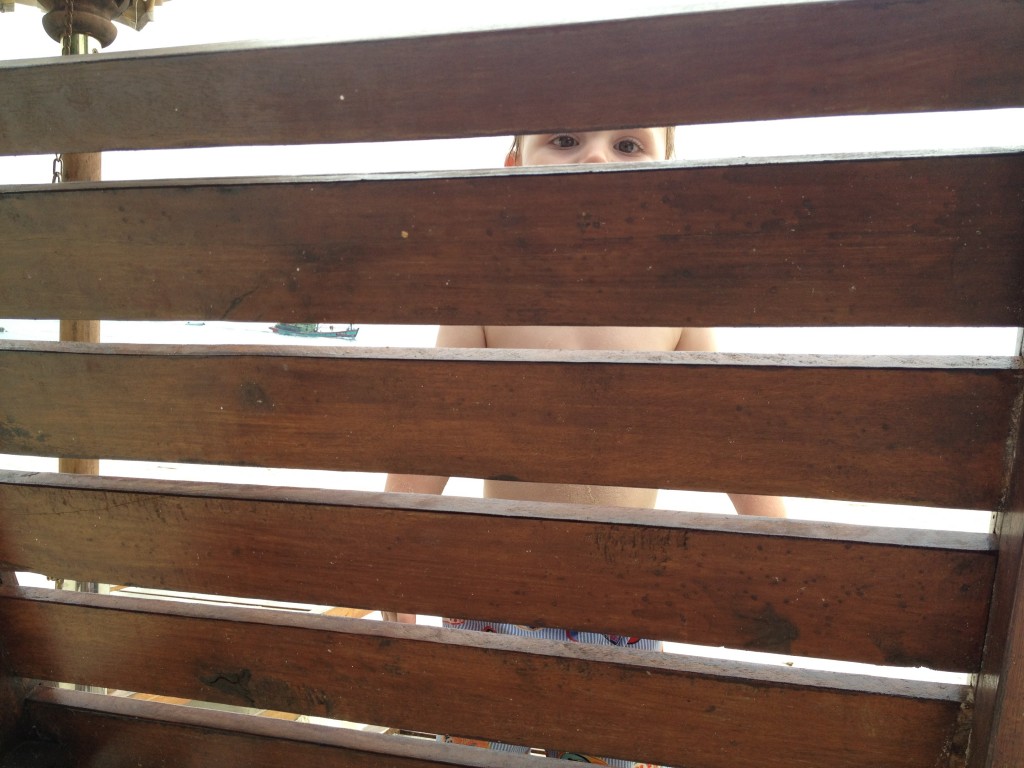 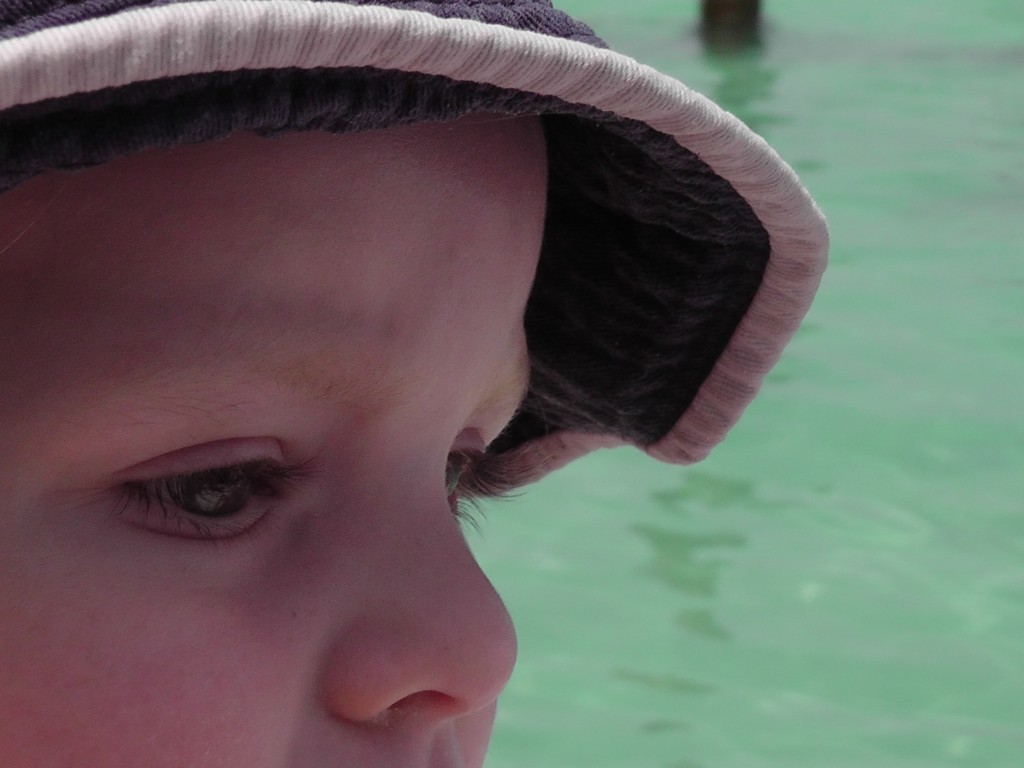 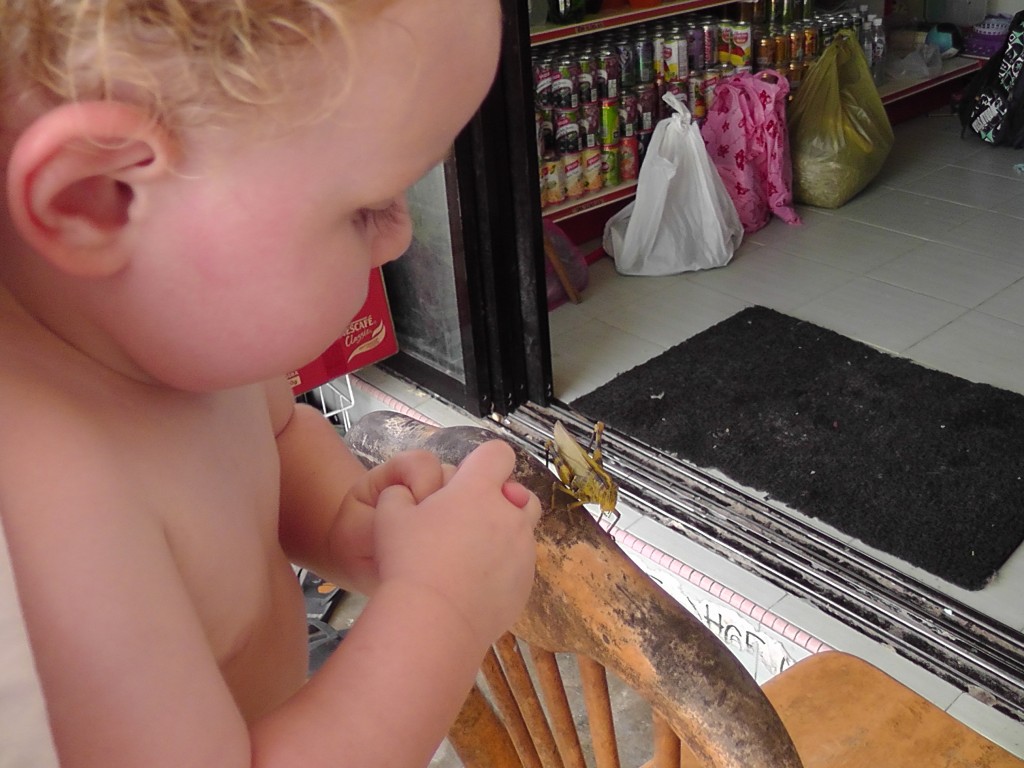 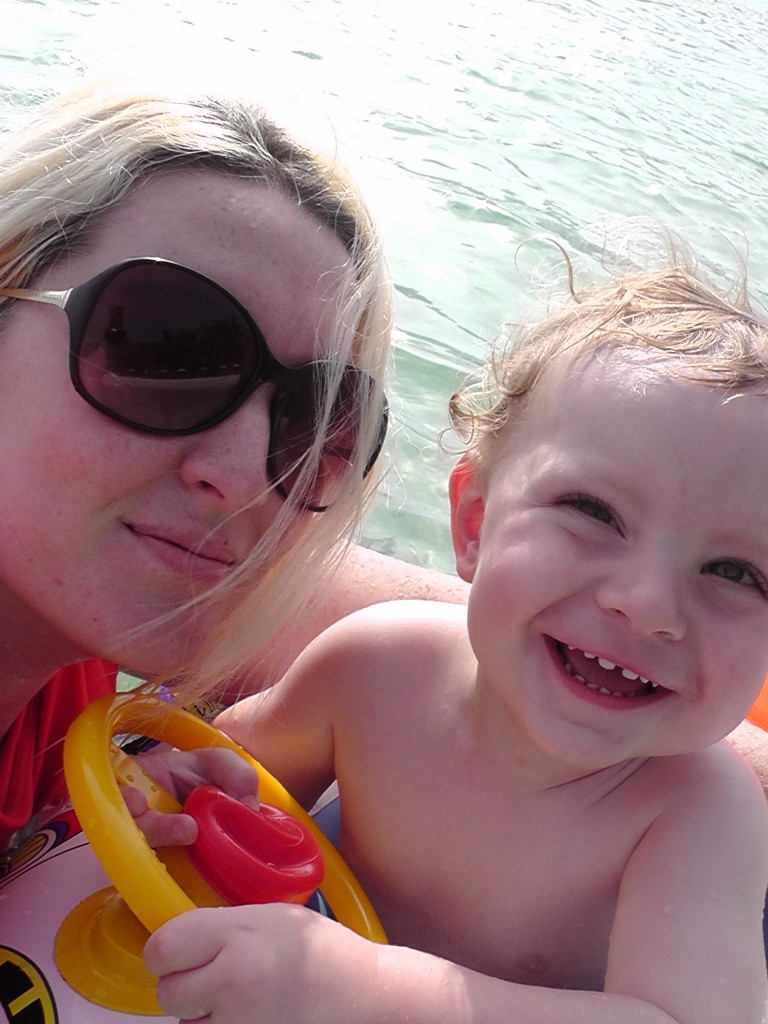 Finally Having Some Fun at the Beach

The water is a lovely temperature. Warm enough that it’s not a struggle to get it but cool enough to provide some relief from the heat of the day. It’s the clearest water I’ve seen on any beach. There is an abundance of sea life right at the doorstep to the resort at Tuna Bay. A reef wraps it’s way around most of the island.

You may remember, when we last scheduled a week at the beach over on Koh Phangan in Thailand, Reuben went psycho. He hated the beach, tantrummed all day and wouldn’t go near the water. Well… thankfully, we found the perfect antidote to his beach aversion. 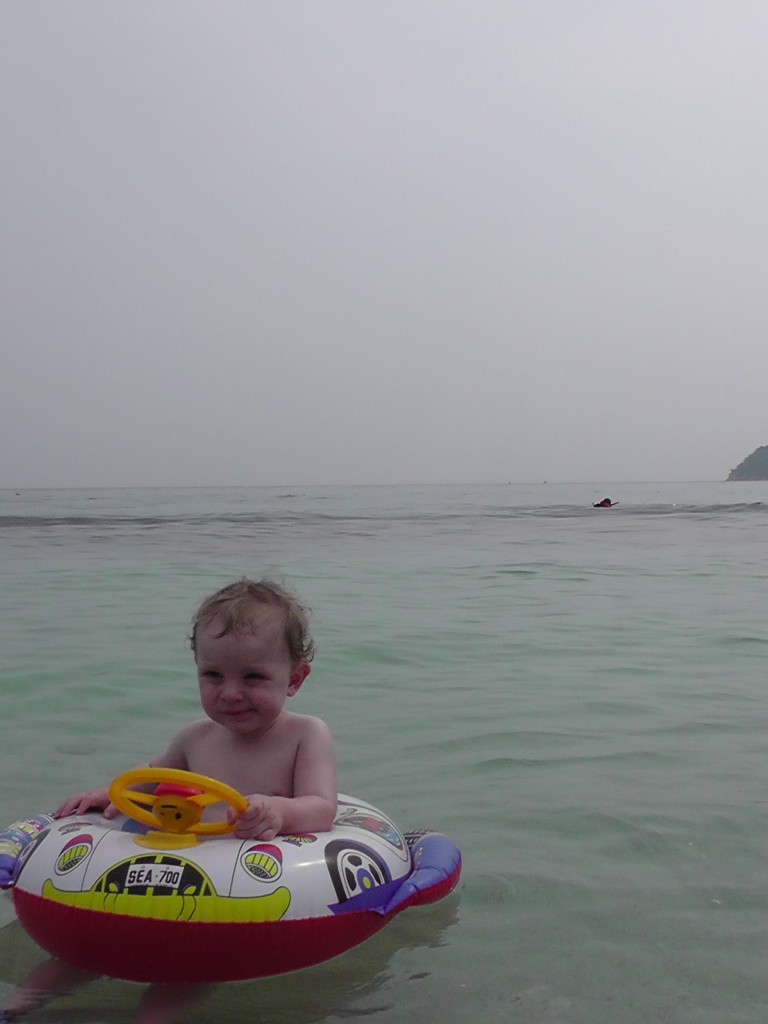 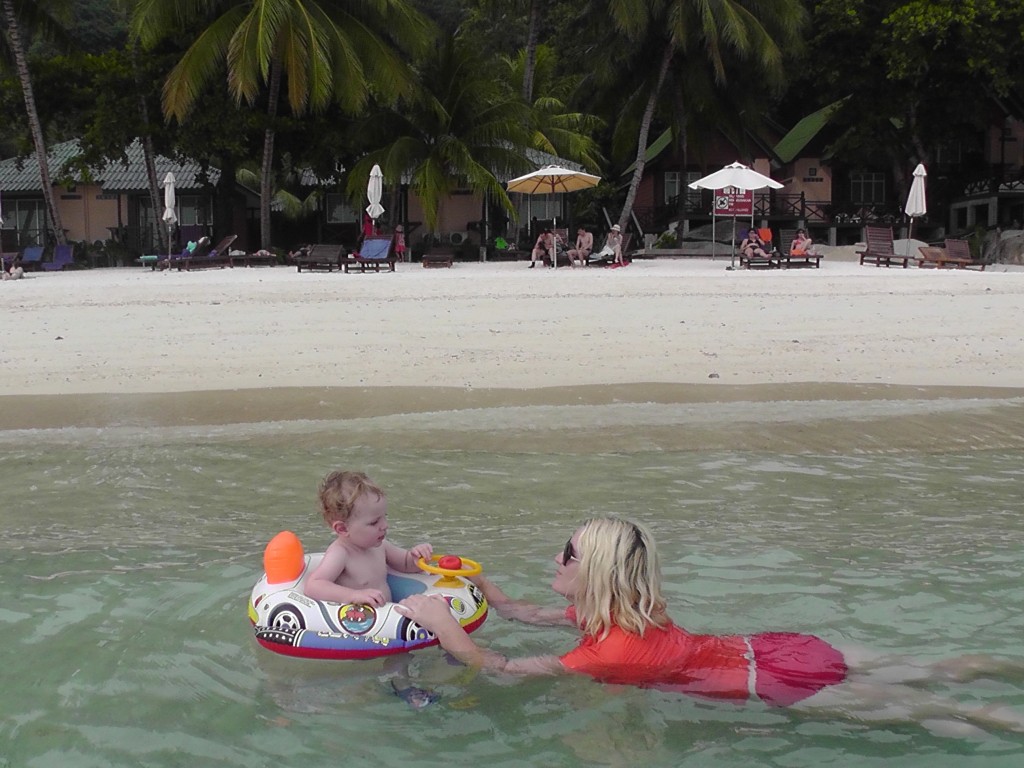 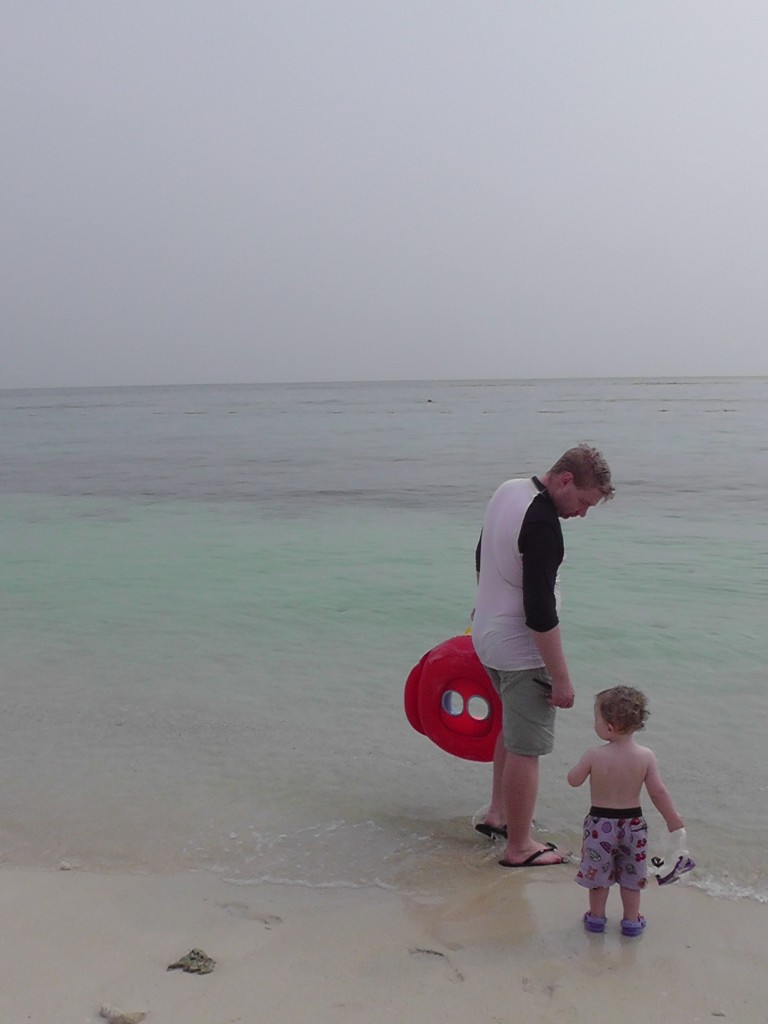 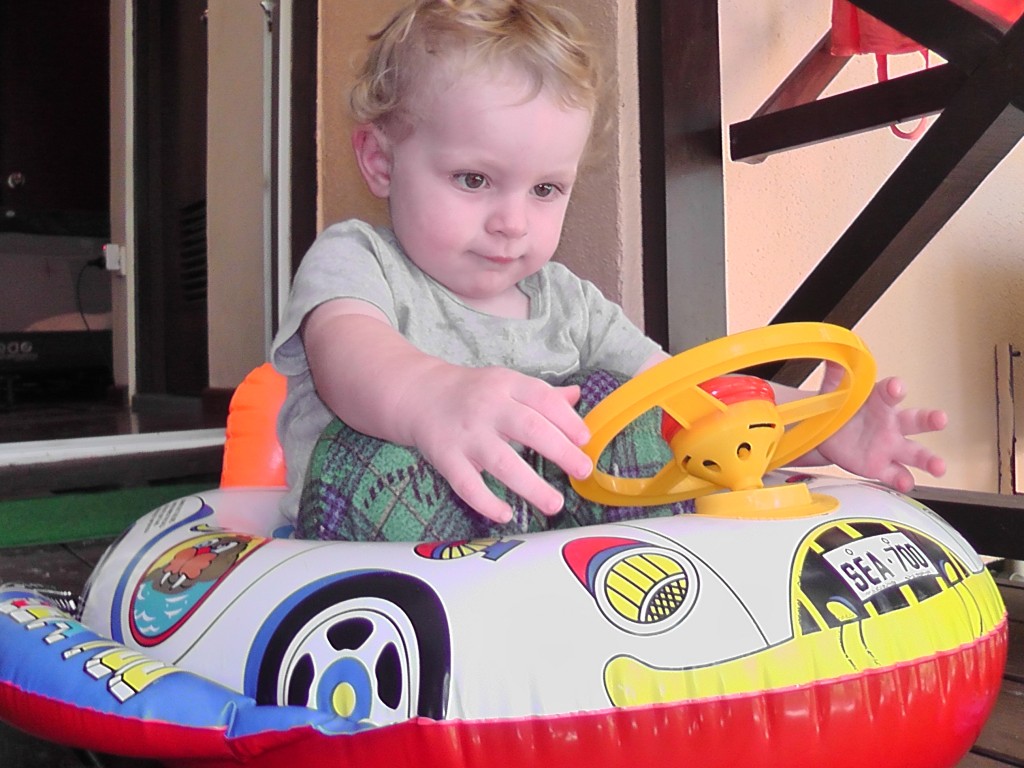 Even on land we couldn’t get Reuben out of his car!

What did we think of The Perhentians?

They are expensive but they really don’t compare to any other beach or island I’ve been to in South East Asia. The sand is perfect, powdery and white. The sea is super clear and you can snorkel right off the beach. In short, it’s paradise… and paradise is worth the extra expense.

We didn’t want to leave at the end of our week. At the same time we were ready for a touch of civilization. There isn’t a lot to do other than sunbathe, swim and play on the sand.

I’d definitely go again. And I’d recommend it to any kind of traveller. It’s suitable for backpackers, a romantic break for couples and a family vacation with children.

Read about accommodation, eating options and travelling to the Perhentians with kids in my next post.