0
6
This post may contain compensated links. Please refer to my disclaimer here for more information.

We’ve been in Bangkok for five days now and it doesn’t feel like we’ve gotten up to much.

We arrived at our guesthouse, New Siam II, which I’ve previously stayed in on numerous occasions. I was surprised to see that opened a new building in front of their old one which now houses the reception and more accommodation. We had (unknowingly) booked into the old wing online so we upgraded for 50B a day to the newer rooms. Our room is similar to the ones I’ve stayed in but has a nicer bathroom, a mini-fridge and a balcony with a view out to the Rama VIII suspension bridge. The mini-fridge has been a real blessing for milk and yoghurt meaning we can get some food into Reubs first thing in the morning and don’t have to head out in a panic looking for breakfast. 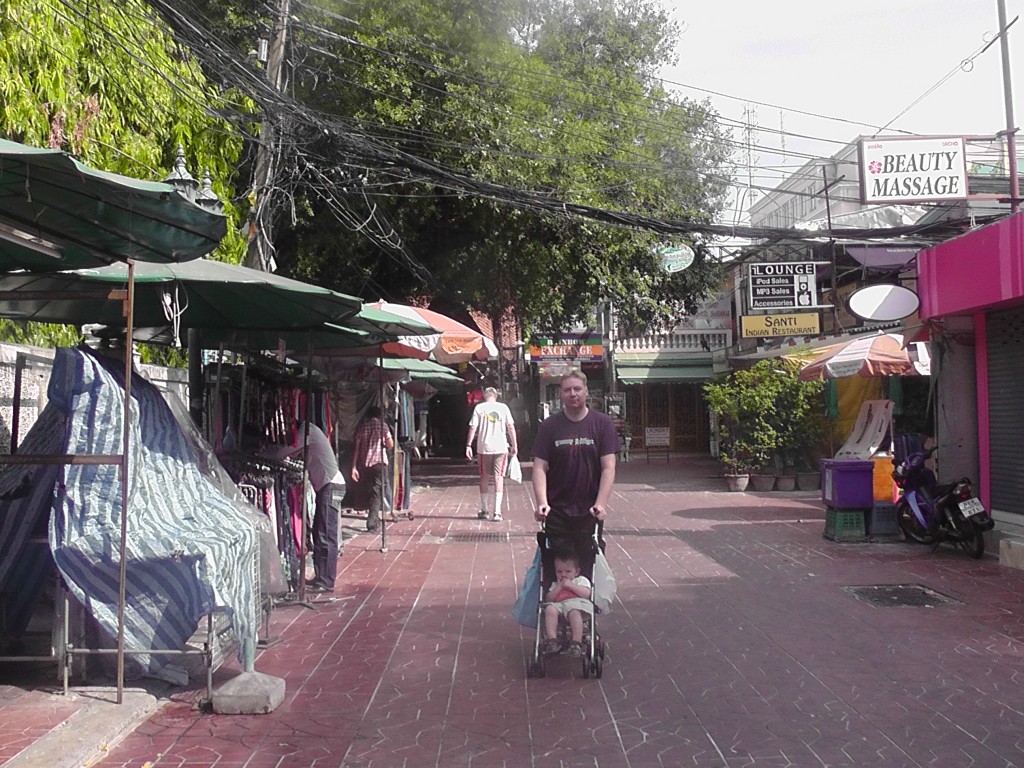 It’s damn hot in Bangkok at the moment and we were feeling it as soon as we arrived. We took a swim in the pool at the guesthouse. Another surprise – the pool is now heated to a really comfortable temperature (instead of being freezing cold.) We shared a plate of fried rice by the pool then went for a walk to explore. We wandered down Soi Rambuttri and over to Khao San Road. Boy has Soi Rambuttri changed in the past three years! It used to be a more relaxed, quieter alternative to Khao San Road but not anymore. It’s really busy. The amount of street vendors has quadrupled. The street seems to be lined with backpackers on padded outdoor furniture getting foot massages and drinking. I felt disappointed at first, like the secret got out. Maybe it’s my fault for steering people away from KSR on the Lonely Planet Thorntree all these years!

Reuben started to lose it early on in the evening. We ended up putting him to bed at 6pm and getting some food from the restaurant downstairs to eat in our room.

Up at 5am! The consequence of crashing early. We were too early for breakfast at my favourite spot, Ricky’s Cafe on Phra Ahtit Rd, so we wandered down to the Santichai Prakan park next to the fort down by the river. No playground but plenty of space to run and admire those up for their early morning exercises.

We had an appointment at 10am at the Thai Travel Clinic at the Hospital for Tropical Diseases. Two taxi rides, a visit to the wrong hospital and almost two hours later we finally found the right place. I had the address written down in English and the name of the clinic written in Thai but this wasn’t good enough for the taxi drivers or any of the people our taxi driver kept asking. I should have printed out the map in Thai from the clinic website. We were at the clinic from 11am to 1pm. We spent a lot of time waiting – we’re not quite sure what for! We saw a nurse and then a doctor who advised us of the vaccinations they offered. We already knew what we needed – typhoid for me, tetanus and typhoid for Lee and a blood test for both of us to check for hepatitis immunity. The nurses and hospital staff were all really nice and helped keep Reuby entertained but the whole thing was completely exhausting. By the time we made it back to our hotel we all crashed on the bed and slept for two hours. 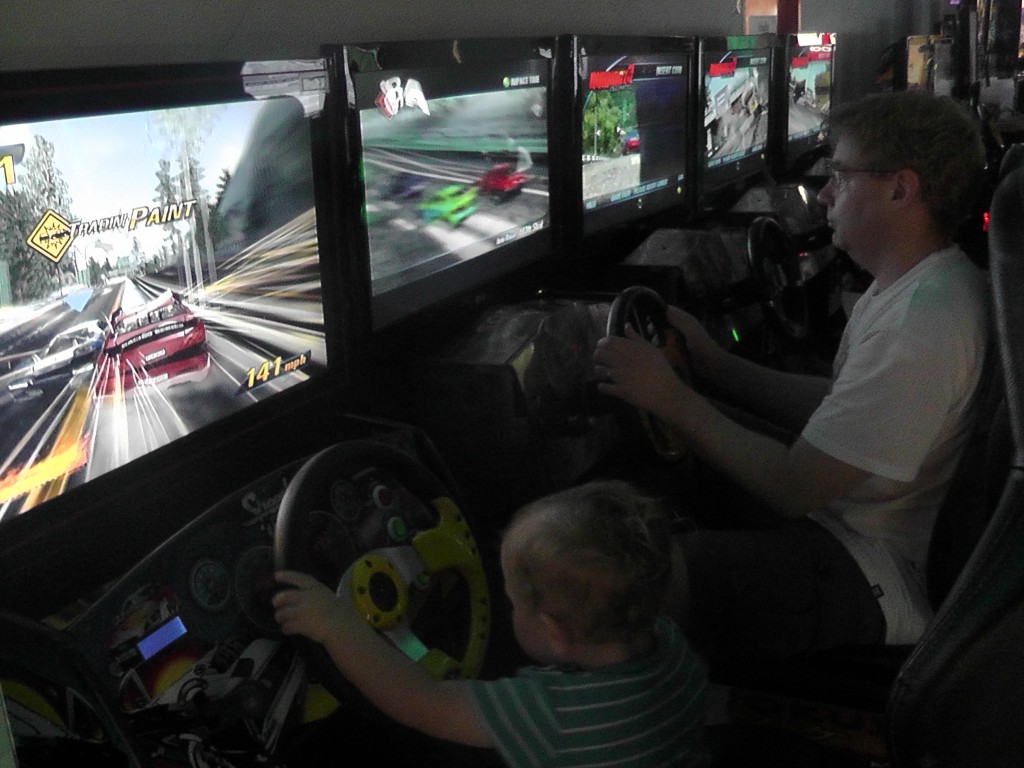 Waking up late in the afternoon and having not eaten any lunch, we headed off in a taxi to MBK and ate up a storm at the food court – dim sum, bbq pork, bbq duck, pad kee mao, tofu chicken and glass noodle salad.Reuben ate a little pork and demolished an entire plate of wholegrain rice. (If you want wholegrain rice, you’ll need to get it from the vegetarian stall). We spent 400B which included six(!!) bottles of water and a pineapple juice. 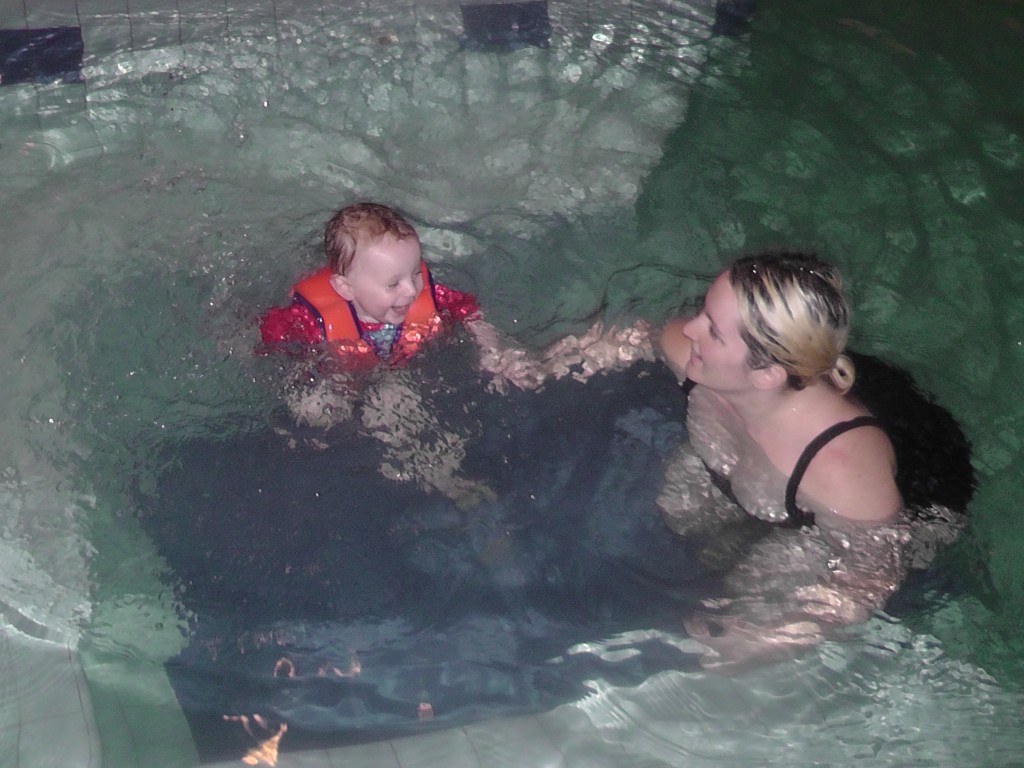 We wandered around the mall for the rest of the afternoon. We bought a toy car and an Elmo t-shirt for Reuby and a few other bits and pieces. By the time we headed out for a taxi it was after 7pm. On returning to New Siam we intended to get food for Reuben and put him to bed. We walked past the pool to the restaurant. Huge mistake!! He has a massive tantrum and demanded a swim.We had a quick dip but he refused to eat any dinner. He was asleep at 9pm – incredibly late for starting the day so early.

I snuck down to Soi Rambuttri for a massage and bought back a delicious banana roti and some mango & sticky rice. 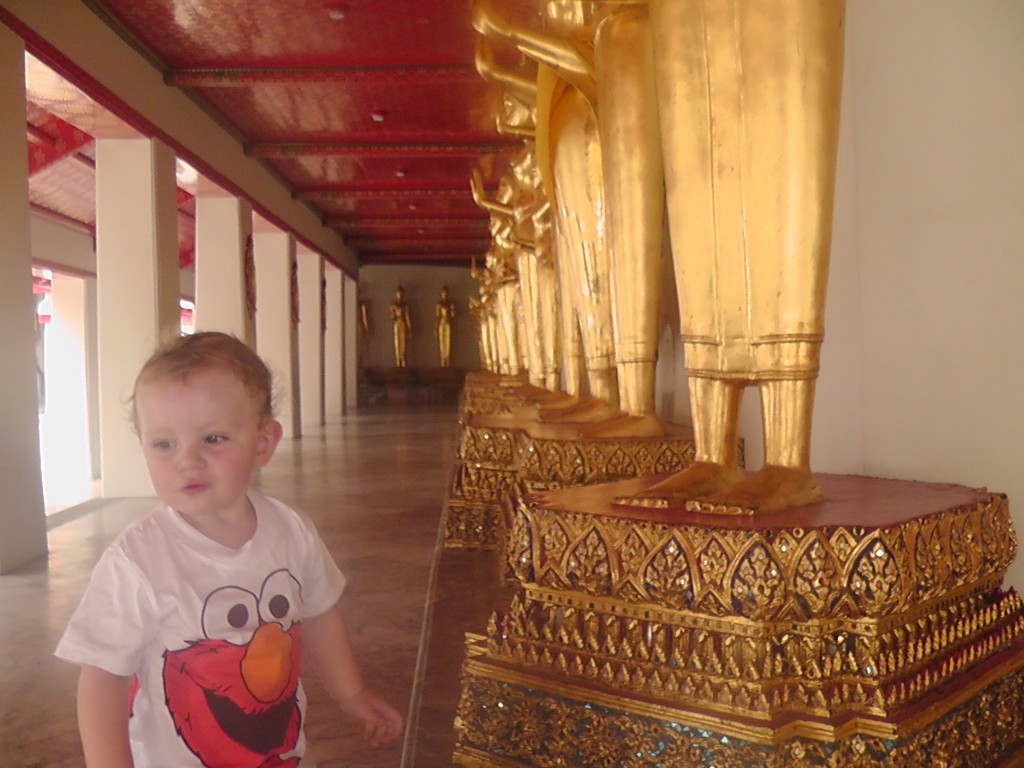 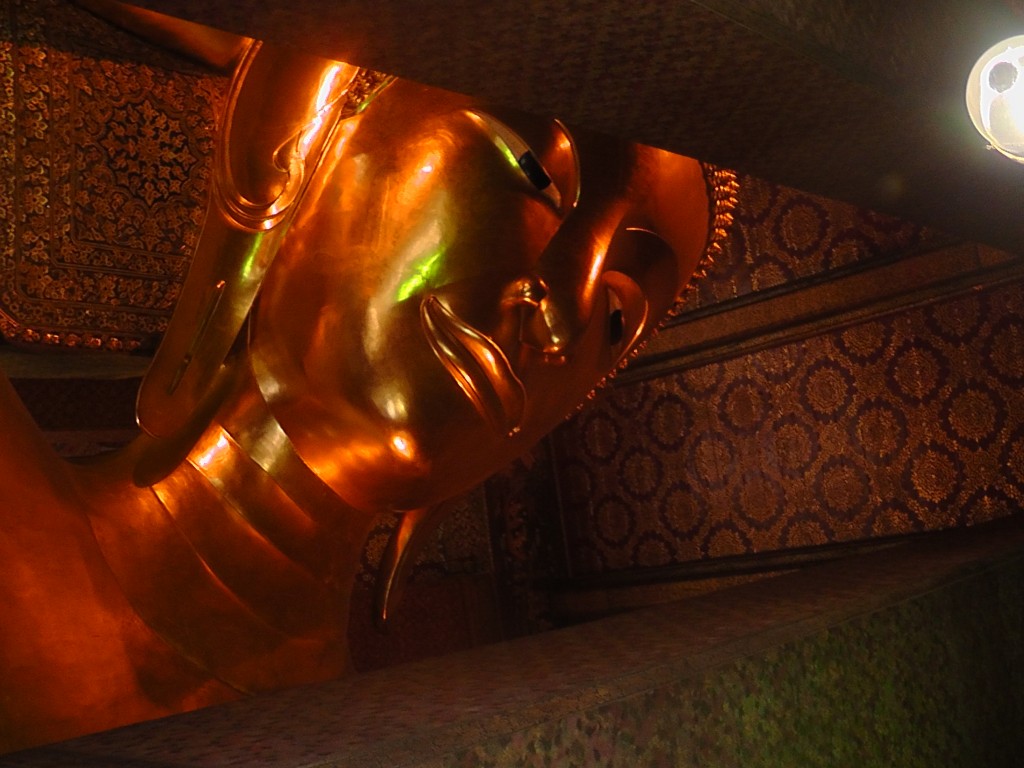 Up early again, we ventured out to Wat Po first thing to beat the heat.We arrived just before it opened at 8am but were still admitted. Tickets costs 100B each and Reuby was free. We wandered around for a bit but it was too hot for us, even at this time of the morning. We made a quick loop around the complex and finished up at the large reclining Buddha which doesn’t open until 8.30am. By this time the crowds had arrived. Reuby was losing his mind so we made a quick exit and headed back for a late breakfast, a swim and a nap. 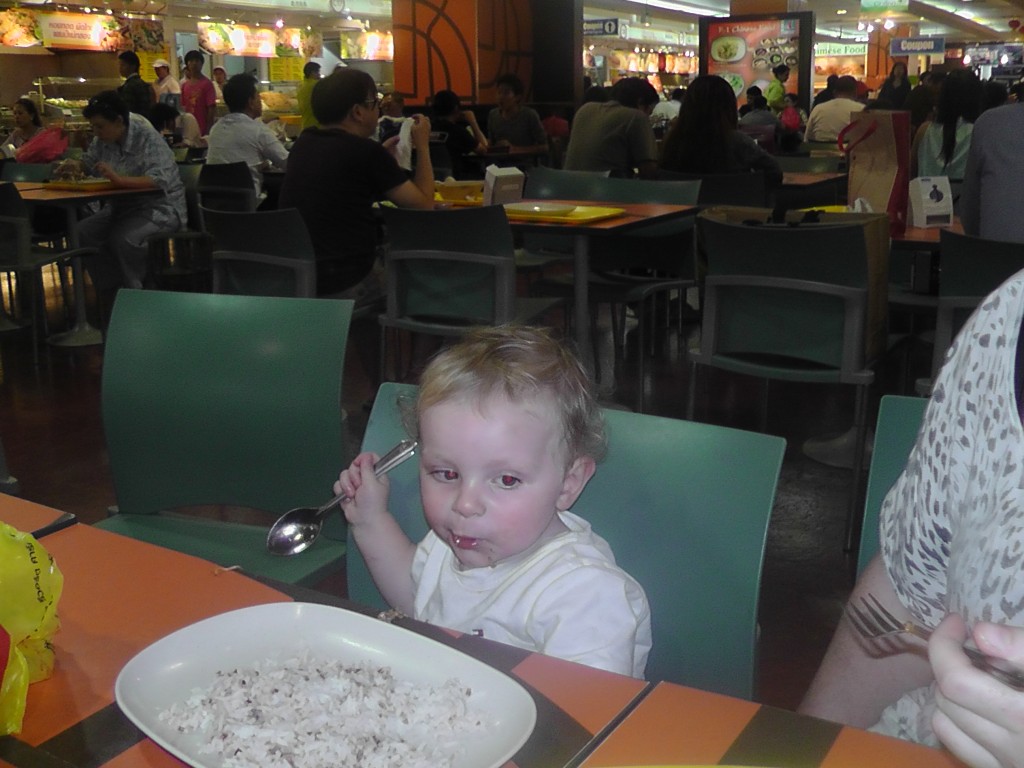 Another Meal at MBK Food Court

Our intention was to wake up and take a ride on the river boat down to the the Skytrain and head back to MBK. We woke up late and, feeling impatient and hungry, we opted for a taxi ride instead. Another delicious food court lunch, this time only spending a less greedy 300B. We wandered around the mall a little more and Lee got a really good haircut for 250B. Reuben was particularly badly behave and had tantrum after tantrum so we left.

Back on Phra Athit Rd, we went down to the excellent Roti Mataba for dinner. A hole in the wall restaurant, we sat outside on tiny chairs and ate delicious Southern Thai-style curry and roti. Roti are little bread – a sort of fried pastry-naan combination, perfect for scooping up curry or eating drizzled with condensed milk. Particularly good was the massaman which tasted like a massaman-tamarind-sweet & sour hybrid. Delicious.

After a tantrum-filled day three we decided to keep it simple on day four in Bangkok. We ate breakfast together then I headed off for an appointment to get my hair done. Sugar Salon comes highly recommended by foreigners needing colouring or extensions in Bangkok. Having almost black hair that I bleach blonde, I’m fussy about who colours it. The trek to the outskirts of Bangkok was worth it and I got an excellent cut and colour for 1500B.

Lee and Reuben spent two hours (!!!) in the pool while I was out and went back to Roti Mataba for lunch… and bought me back some takeaway. After lunch I took Reuby for a walk down Soi Rambuttri in the stroller. It was a very bright and sunny afternoon so we headed for Swensen’s, an ice-cream parlour, and had a yummy sundae. I took him for another swim and he spent another hour in the pool, occupied mostly by some very entertaining older Thai kids.

We went to Chinatown for dinner. I wanted to eat on the street but it was really crowded so we opted for a restaurant. Lee and Reuben liked it. It was too boring for me.

We had an email from the nurse saying our hepatitis tests came back negative meaning we needed to go back for another round of shots. We taxied there, had the shots and were out in 45 minutes this time. The whole time we were at the hospital, Reuben screamed and tantrum-ed. It was unbearable and very embarrassing. All because I wanted to tie his shoe lace. 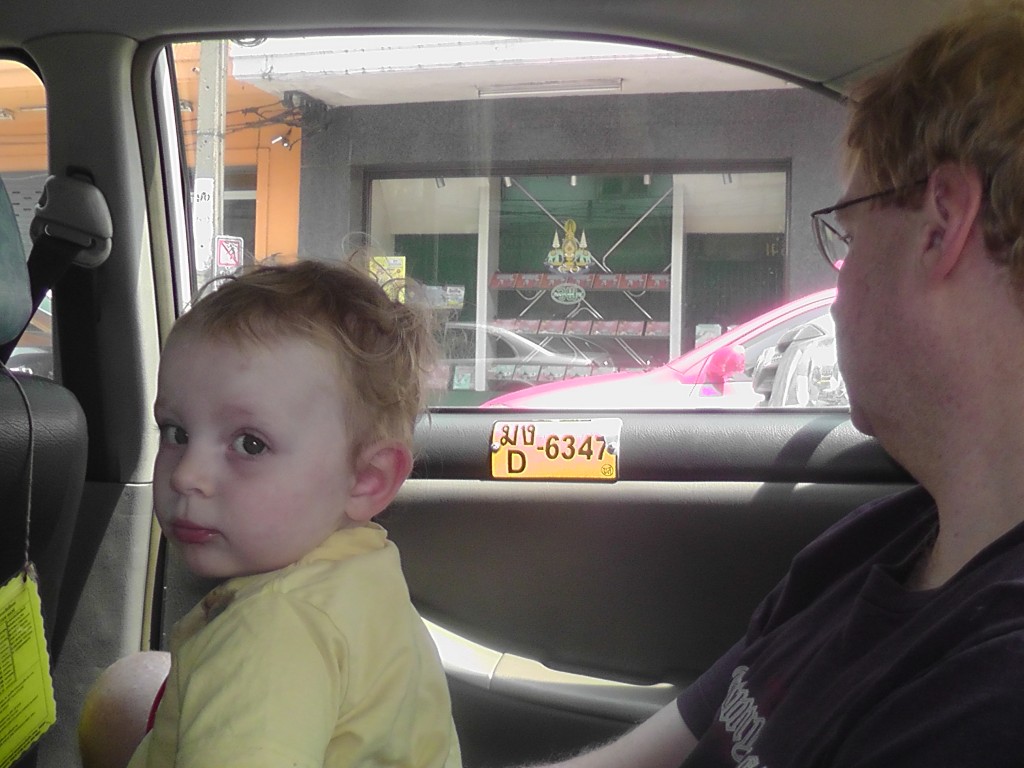 We then spent almost an hour wandering the streets in 40 degree heat, desperately seeking a taxi. They were all full. Every single one that passed us by. After what seemed like an eternity we made the decision to walk towards a Skytrain station at Victory Monument, directed by our iPhone. Maneuvering through the sidewalk was difficult. It was broken and crammed with street vendors and people. Lee ended up carrying Reuben and I carried the folded up stroller. So glad we bought the little umbrella stroller and not the Mountain Buggy.

After about 20 minutes of walking we found a tuk-tuk and headed to Panthip Plaza. What a relief it was to reach air-conditioning! We were all soaked through, dripping with sweat. Not to mention dehydrated and hungry. We quickly found a place to drop my laptop in for repair, the reason for our trip to Panthip, and found somewhere to rest and have a drink. I was delighted to find my laptop screen fixed in 30 minutes for only 3000B. We bought a few more electronic bits and pieces and headed out to find a taxi as it was getting close to dinner time.

After waiting 20 minutes in a taxi queue that wasn’t moving we decided to walk to the Skytrain and go to MBK for dinner knowing that at least we’d be able to find a taxi there. It was an easy 10 minute walk to the Skytrain and we made it quickly to MBK. After eating, again at the food court, we went downstairs to Tops supermarket and bought some nappies which were surprisingly cheap – less than 200B for 40 good quality “Drypers”.

We had yet another taxi nightmare. After 45 minutes in the taxi queue we ended up in a near physical altercation with a taxi driver who wouldn’t switch on the meter or take us where we wanted to go and decided we was going to dump us out onto the street, in the middle of traffic, in the dark. Luckily for us this just happened to be where a police officer was standing and he quickly sorted us out. The driver made a speedy exit from the situation and the police officer helped us get into another taxi.

Verging on tears (me) and rage (Lee) we had definitely had our fill of Bangkok and couldn’t wait to get out of town in the morning.